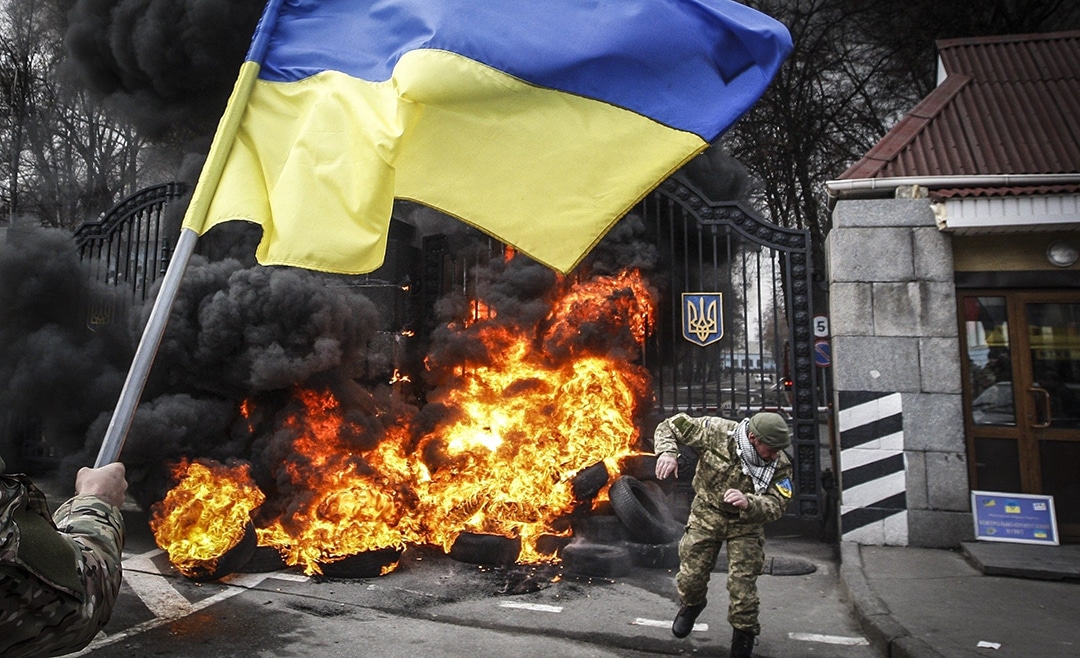 Was Ukraine betrayed by its elites?

The Russian invasion of Ukraine is only the most recent and violent violation of its sovereignty. The deeper roots of the crisis lie in Ukrainian elites’ failure to represent their whole nation and to uphold its sovereignty, aided and abetted by irresponsible Western powers.

Like many post-Soviet states, upon becoming independent in 1991, Ukraine faced a serious challenge of nation-building. Ukraine is a multinational, multireligious and multilingual country with little historical experience of independent statehood. Its major ethno-linguistic groups include Ukrainians in the west and Russians in the east. Many speak both languages and their histories and cultural practices are deeply intertwined.

An atavistic nationalism that bases political authority on supposed ancient traditions of ethnic-Ukrainians alone is neither consistent with reality, nor capable of uniting the whole Ukrainian people. The challenge of post-Soviet nation-building was, therefore, to craft a civic nationalism, based around a shared commitment to democratic self-government.

Sadly, Ukrainian elites failed in this task. Indeed, as Yuliya Yurchenko documents in her compelling but depressing book, Ukraine and the Empire of Capital, they were too busy plundering the remnants of the Soviet economy, with officials and their criminal-business networks transforming themselves into powerful, predatory oligarchs while the rest of their society fell into penury.

From 1990 to 2000, Ukraine’s GDP fell from $81.4bn to just $31.2bn. Hyperinflation, peaking at 10,155% in 1993, destroyed people’s living standards, creating long-term unemployment, especially among the young. The oligarchs had little to offer citizens, relying increasingly on fraud, corruption and intimidation to stay in power.

In this context, reformers — who took power after the 2004 “orange revolution” — looked to EU and Nato membership as a way to transform their society. This attempt to move “from Brezhnev to Brussels” occurred widely in post-communist Eastern Europe. In Ukraine, reformers hoped that EU rules would discipline or destroy the oligarchs and root out corruption by imposing free-market reforms.

But this was a very dangerous strategy. As Yurchenko observes, the EU-Ukraine Deep and Comprehensive Free Trade Agreement (DCFTA) signed in 2008 would, if fully implemented, devastate small businesses and workers by exposing them to continental competition. Meanwhile, many oligarchs have found ways to exploit the opening of markets and limit measures that would damage their interests.

Other oligarchs resisted liberalisation by rallying the people of eastern Ukraine into thinking that pro-Western elites were not heeding their interests. Donetsk, where many oligarchic businesses are based, has deeper economic, linguistic and cultural ties to Russia, and people there have often complained of being neglected and sneered at by the West, despite constituting a substantial share of Ukraine’s GDP and population.

The oligarchs began harnessing this resentment, fostering a growing east/west split in Ukrainian politics. The “East” — led by Viktor Yanukovych’s Party of the Regions — retook national power following the 2010 presidential election. Yanukovych’s subsequent persecution of his opponents drew the ire of Washington and Brussels, but this only reinforced his preference for stronger ties with the Russian-led Eurasian Economic Union (EEU), reflecting the economic needs of his eastern base.

This growing internationalisation of Ukraine’s domestic struggles was perilous, given the geopolitical context. Russia had stridently opposed Nato’s eastward expansion since the Nineties. Gorbachev had asked Washington to disband Nato in exchange for the dissolution of the Warsaw Pact, while Yeltsin had asked for a new, inclusive security architecture that incorporated Russia into Europe, only to be rebuffed. The latter later warned the West that a Cold War was giving way to a cold peace, with Nato expansion entailing “nothing but humiliation for Russia”.

When the West proceeded anyway, Yeltsin’s successor, Vladimir Putin, made it clear that Moscow saw Nato expansion as directed at Russia. In April 2008, a Nato summit welcomed Georgia and Ukraine’s aspiration to join the alliance. Putin invaded Georgia a few months later, rather than see it join this anti-Russian bloc. Many analysts, from the Cold Warrior George Kennan to the realist professor John Mearsheimer, predicted disaster if Nato continued to expand towards Russia’s borders.

The same, to a lesser extent, applied to EU expansion. Putin described the DCFTA as a “big threat” to Russia, as it would allow EU exports to enter tariff-free, via Ukraine, and “choke” the Russian economy. EU officials insisted their cooperation with Ukraine was merely technical, refusing to recognise the geopolitical implications.

The 2014 “Euromaidan” crisis saw the culmination of this toxic fracturing of the Ukrainian nation. In 2013, President Yanukovych rejected the DCFTA, opting for closer ties with the EEU. This prompted widespread protests, which were egged on by senior EU and American politicians, despite the growing involvement of far-Right nationalists. Eventually, amid escalating unrest and violence, Yanukovych fled to Russia. But while his opponents in western Ukraine celebrated, his eastern supporters perceived a “fascist” coup against their democratically-elected president. The Ukrainian state’s authority collapsed in the east, allowing opportunistic pro-Russian separatists to seize power in many areas, while Russia reacted by invading Crimea.

Instead of moving to reassure their fellow citizens and build an inclusive national project, Ukraine’s pro-Western faction instead doubled down. Under the new president, the oligarch Petro Poroshenko, the Government purged eastern politicians and officials from the state, sending many fleeing into exile, and banned Yanukovych’s Party of the Regions, intensifying the crisis of representation in the east. It also launched military offensives against the separatists, triggering further Russian intervention, producing heavy casualties and a grinding stalemate.

Neither Poroshenko, nor his successor, Volodymyr Zelenskyy, have implemented the Minsk accords agreed with Russia in 2014-15, which proposed to settle the conflict by granting autonomy to Donetsk and Luhansk. Instead, the new government loudly sought full membership of Nato and the EU — measures that could only undermine Ukraine’s national sovereignty. Yet the EU has not — and will not — actually admit Ukraine, as it is still reeling from the divisions induced by the last round of enlargement into post-communist Eastern Europe and does not want to take responsibility for a war-torn country. But it was happy to pretend otherwise, flattering Ukrainian elites while pushing neoliberal reforms on them.

The Poroshenko government enacted the EU DCFTA, rapidly introducing structural reforms to comply with EU rules. Facing rising debt amid economic decline, the Ukrainian state became economically dependent on the EU and IMF. Foreigners were brought in to run three ministries and IMF advisors were embedded with the central bank, entailing further losses of sovereignty. Austerity, neoliberalism and further privatisation benefited well-positioned oligarchs but did nothing to alleviate mounting poverty.

Far from reaching out to Ukraine’s ethnic Russians, Kyiv has actively promoted a narrowly Ukrainian, anti-Russian form of nationalism, reflected in language policy, “de-communisation”, and the secession of the Ukrainian Orthodox church from its Russian “mother” church. As Yurchenko observes, instead of reconsolidating Ukraine, these measures only “further divided the broken nation”.

This failure of Ukrainian politicians to represent the whole nation has led both sides to turn to foreigners to bolster their domestic position. The pro-Russian faction appears backwards and corrupt, offering little to inspire and unite the country, and ultimately relies on Russian intervention to prevent Ukraine slipping from its grasp. But nor can the pro-Western faction command the consent of the whole nation. It was prepared to overthrow a democratically-elected president to get its own way, and has persistently sought to lock in its preferences against internal opposition by sacrificing Ukrainian national sovereignty to supranational organisations.

Russia’s role in this disaster is obvious. It is hardly surprising that Ukrainian nationalism has taken a sharply anti-Russian turn given the annexation of Crimea, Russian support for separatist fighters, and Putin’s open contempt for Ukrainian independence and sovereignty — let alone the recent invasion.

But the West has also been reckless and irresponsible. Russia has made perfectly clear that it will not tolerate the expansion of the Western sphere of influence up to its borders. It wants at least a neutral buffer zone between itself and Nato, and ideally a friendly sphere of influence among its post-Soviet neighbours. We might wish this were not so, but it is a geopolitical fact. Russia’s willingness to use force to achieve its goals — at great reputational and economic cost — has been beyond doubt since 2008. To put this into perspective, we can imagine how the US might react if Canada sought to join a Russian-led military alliance — or merely recall Washington’s reaction when Cuba did so.

The West had two strategic options. Either it could acknowledge and accommodate Russian interests, or it could defy them, ushering Ukraine into Nato and deploying overwhelming military power to deter Russia from using force. Instead, it did neither. It allowed its Ukrainian allies falsely to believe that they could rely on the EU and Nato, yet did not nearly enough to deter Putin militarily. This has encouraged the Ukrainian government to prioritise integration with Russia’s enemies over rapprochement with its own citizens, while fanning Russian anxieties. Had Nato been clearer, Ukrainian elites might have come to their senses and pursued a less reckless course of action.

The only solution to this crisis, aside from war and devastation, is for Ukraine to become a neutral state, as Finland was during the Cold War. The sovereignty of the Ukrainian people — their capacity to work out their differences and collectively determine their life together in a peaceful and democratic manner — can only be enhanced if all sides renounce their external ties, and foreign powers cease meddling in Ukrainian politics.

To be truly sovereign, the Ukrainian state must be seen to represent the whole national population. The push towards Nato and EU membership — only intensified by Russia’s aggressive reaction — has fragmented the Ukrainian nation. It is hard to see how it can be reunited if this continues; bloody partition seems more likely.

Sovereignty does not imply total control over the state’s internal or external environment; it only entails self-rule, and this requires political realism. This was a source of some confusion in the Brexit debate. Many Thatcherite Eurosceptics foolishly believed that the UK could restore its sovereignty — its capacity to make laws and adopt policies inconsistent with EU rules — while retaining full access to the EU’s single market. The EU had no interest in agreeing such attractive terms; on the contrary, its interest lay in making Brexit as painful as possible.

Today, the Ukrainians clearly have no more “sovereign right” to join the EU or Nato than Brexit Britain had a “sovereign right” to full access to EU markets. Reflecting their own interests, these organisations will not admit Ukraine. This is the geopolitical reality that any truly sovereign Ukrainian government must reckon with.

Of course, Russia must withdraw from Ukraine. But the only way for the Ukrainian people to achieve national sovereignty is for all sides within Ukraine to cease internationalising their political conflict, and for foreign powers to cease their meddling. Neutrality offers the only context in which Ukraine can restore its territorial integrity and secure peace. It also provides the only context in which pro-Western forces will be forced to reckon with their pro-Russian counterparts, and find a more consensual way to exist.