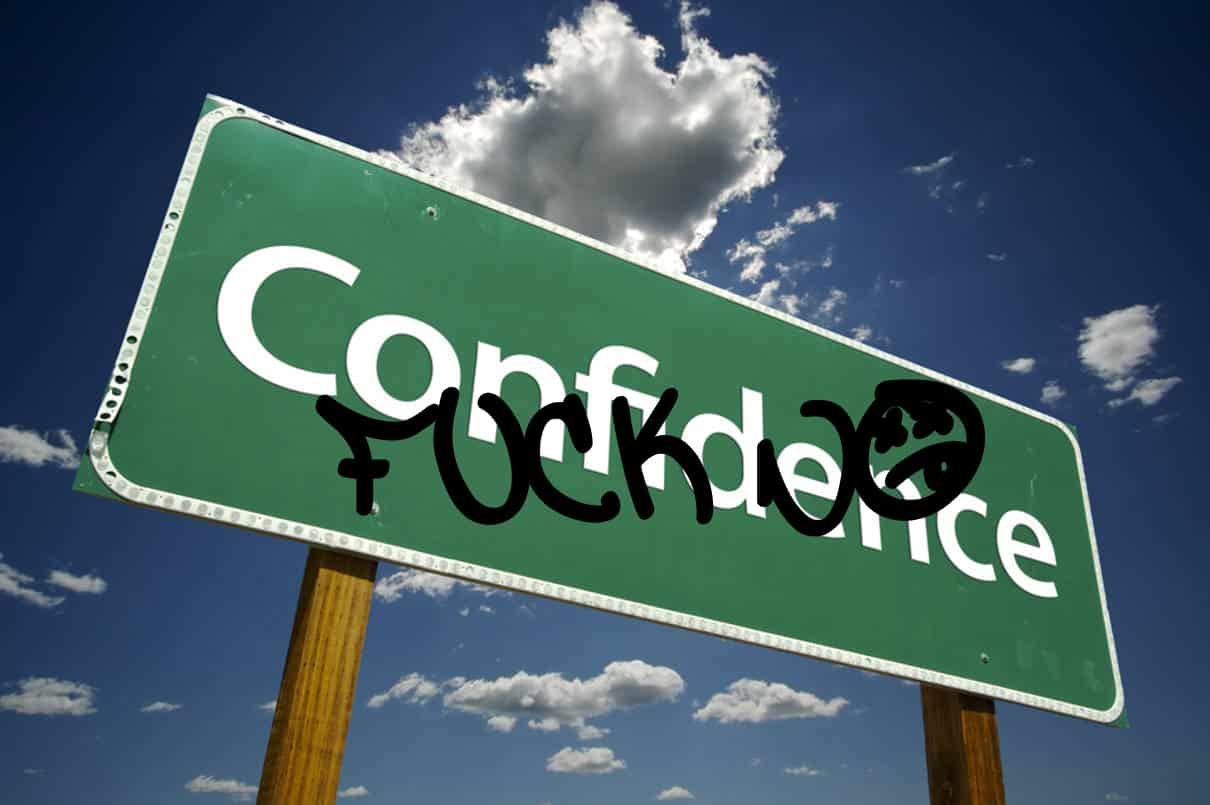 Confidence in U.S. Institutions Down; Average at New Low

Americans are less confident in major U.S. institutions than they were a year ago, with significant declines for 11 of the 16 institutions tested and no improvements for any. The largest declines in confidence are 11 percentage points for the Supreme Court — as reported in late June before the court issued controversial rulings on gun laws and abortion — and 15 points for the presidency, matching the 15-point drop in President Joe Biden’s job approval rating since the last confidence survey in June 2021. 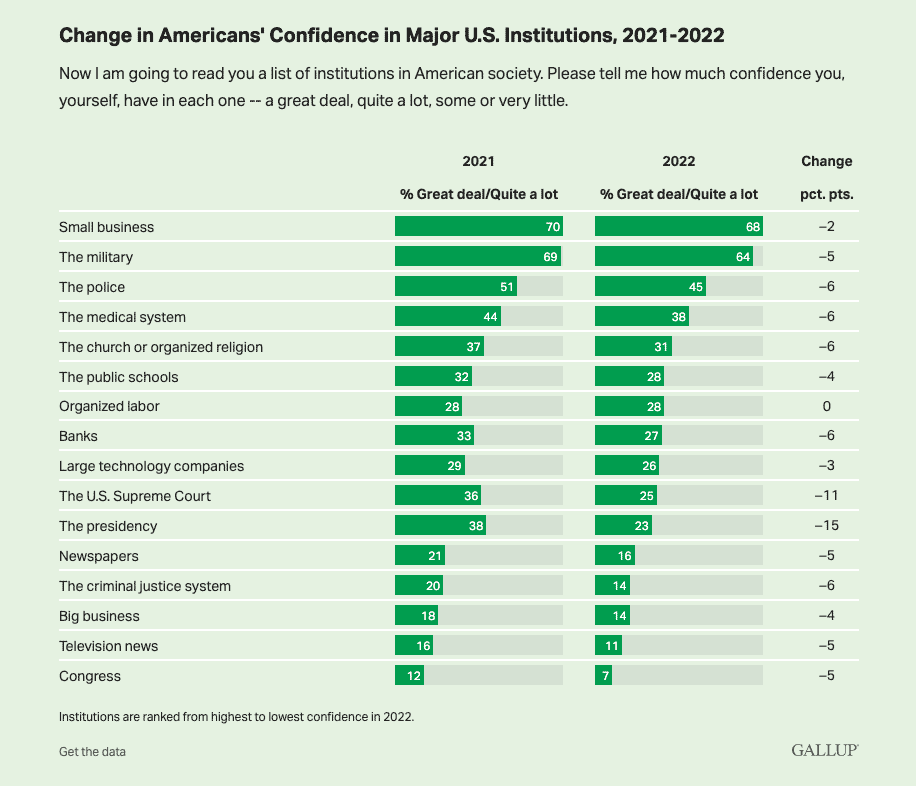 Gallup first measured confidence in institutions in 1973 and has done so annually since 1993. This year’s survey was conducted June 1-20.

Confidence currently ranges from a high of 68% for small business to a low of 7% for Congress. The military is the only institution besides small business for which a majority of Americans express confidence (64%). Confidence in the police, at 45%, has fallen below the majority level for only the second time, with the other instance occurring in 2020 in the weeks after the death of George Floyd at the hands of Minneapolis police.

This year’s poll marks new lows in confidence for all three branches of the federal government — the Supreme Court (25%), the presidency (23%) and Congress. Five other institutions are at their lowest points in at least three decades of measurement, including the church or organized religion (31%), newspapers (16%), the criminal justice system (14%), big business (14%) and the police.

Confidence in large technology companies is also at a low point (26%) but has only been measured the past three years.

Record-Low Confidence Across All Institutions 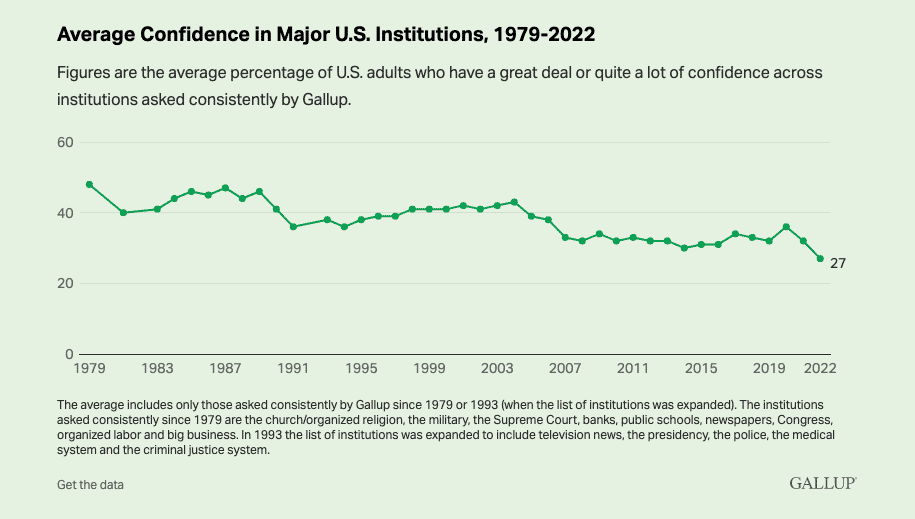 The confidence average is also down nine points from 2020, when Americans rallied around some of the institutions most affected by the COVID-19 pandemic, expressing greater confidence in the medical system, public schools and organized religion.

Average confidence was at least 40% from 1979 to 1990 and from 1998 to 2004. Those latter years spanned the dot-com economic boom and the rally in support of government leaders after the 9/11 terrorist attacks.

Since 2004, a number of factors have conspired to keep confidence down, including the Iraq War, the Great Recession and financial crisis, increasing partisan gridlock in Washington, a resurgence of populism, the COVID-19 pandemic, and inflation rates not seen for four decades.

All partisan groups are generally less confident in the 16 U.S. institutions than they were a year ago, with average declines of four points among Republicans, five points among Democrats and six points among independents.

All three party groups are much less confident in the presidency than they were a year ago, showing declines of at least 10 points. Beyond that, the major changes among party groups tend to be isolated to one or two groups. 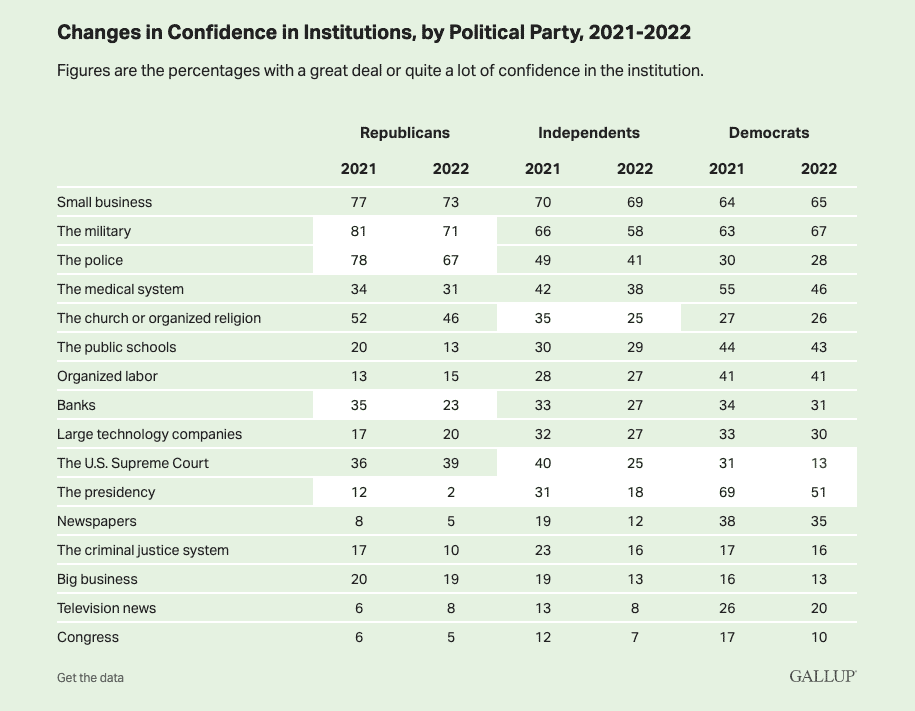 Small business and the military are the two institutions rated most positively by each of the three party groups, while Congress is essentially tied for the lowest among all three. Republicans rate the presidency, newspapers and television news similarly low to Congress. Television news ties Congress as the lowest among independents, while the Supreme Court and big business are rated about as poorly as Congress is among Democrats.

Republicans and Democrats differ most in the confidence they have in the presidency (49 points), the police (39 points), newspapers (30 points) and public schools (30 points). The groups differ less, but still by significant margins, in their confidence in the Supreme Court, organized labor, organized religion, the medical system, television news and large technology companies.

Democrats are more confident than Republicans in most of these institutions; the exceptions are the police, the Supreme Court and organized religion.

Notably, confidence in the major institutions of the federal government is at a low point, at a time when the president and Congress are struggling to address high inflation, record gas prices, increased crime and gun violence, continued illegal immigration, and significant foreign policy challenges from Russia and China. Confidence in the Supreme Court had already dropped even before it overturned Roe v. Wade, though that ruling was expected after a draft opinion was leaked in May.

The confidence crisis extends beyond political institutions at a time when a near record-low 13% of Americans are satisfied with the way things are going in the U.S. Confidence in institutions is unlikely to improve until the economy gets better — but it is unclear if confidence will ever get back to the levels Gallup measured in decades past, even with an improved economy.