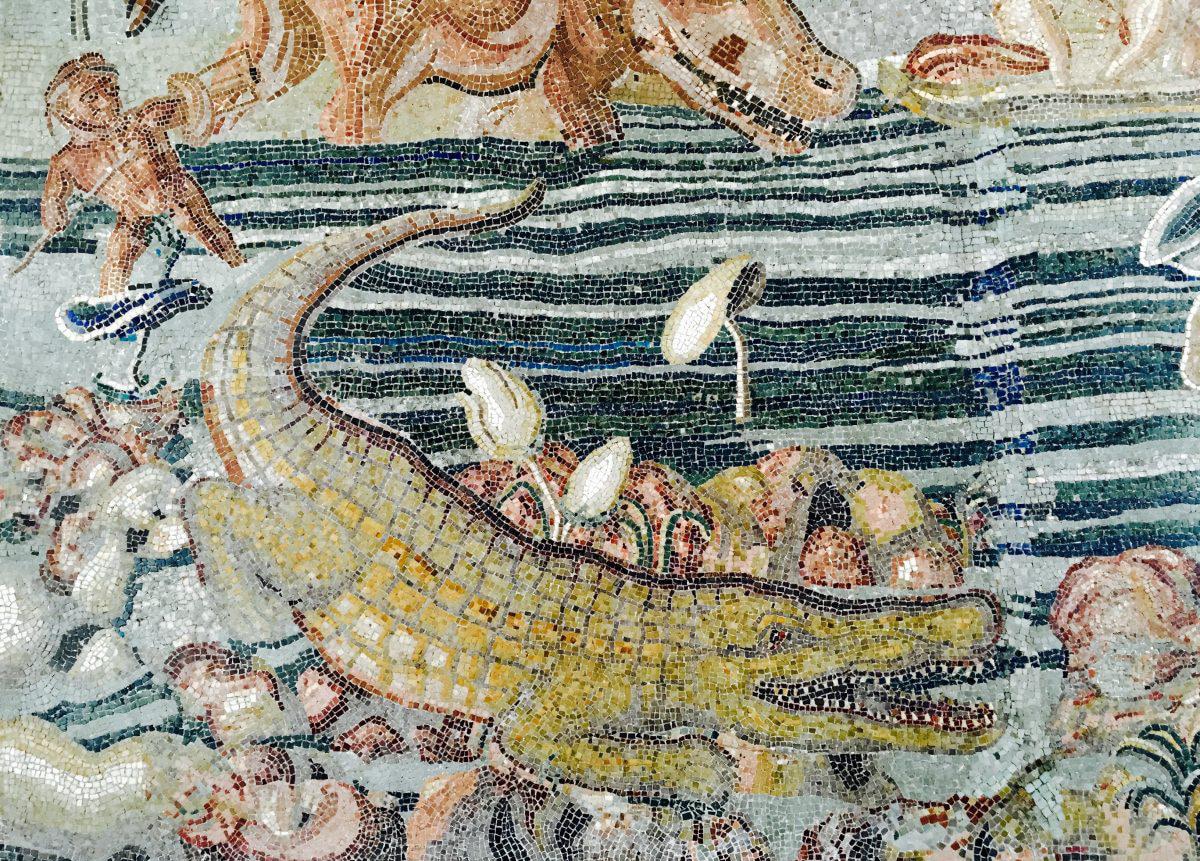 Crocodiles Then and Now

As a child curious about my Italian heritage I was encouraged to read about the glories of Rome.

Much to my surprise, instead of finding a legacy that would swell my bosom with pride for my forbears, I discovered a history of law-breaking brutality, betrayal, inconceivable sadism and endless conspiracies – a history of little regard for the rank and file citizenry of the Republic and Empire but endless appetite for intrigue, conquest and murder. Tactitus, Plutarch, Suetonius – even Caesar and Cicero themselves in their own works – gave me ample evidence for a chapter best closed, and an overwhelming appreciation for having been born into a time far removed from such inescapable monstrosities. And during the power games played out by the elite of that time – as, for example, the period of the two Triumvirates – even an ordinary pleb was inevitably forced to take sides. Most striking, however, was my discovery of the gladiatorial games held at the famed Colosseum of Rome, the details of which, filled with elaborate stagecraft and human sacrifice to delight and divert the masses, were, quite literally, impossible to stomach.

But think of the roads and aqueducts!’ my mother rejoined; and yes, I did think of them, along with the toil of the innumerable slaves and ordinary Romans and soldiers and who knows who else enjoined to construct them.

I studied Latin nonetheless when I grew older and the poetry of Catullus and Virgil wooed me into a more mature appreciation of ancient strife and the contextual politics of civilizations, though the intricately long-winded speeches of Cicero always had me rooting for his opponents.

I prefer to think of Rome these days from Fellini’s La Dolce Vita with the magical Anita Ekberg and Marcello Mastroianni at the Fontana di Trevi late at night – my personal antidote to the unbearable reality of history. It is not, however, this charming scene that comes to mind today, mired as we are in a web of such cleverly constructed and murderous evil: it is the Rome of Power, the succession of emperors and their ruthless contempt for law and decency, the ever-murdering Rome of imperial rule, all well documented and described and perhaps epitomized by Nero, a man who had his mother murdered, who pushed his tutor Seneca into preemptive suicide, who dispatched his perceived rivals to oblivion on a whim, and who, with ineffably macabre irony, demanded adulation for his artistic ambitions.

We are now roughly 2000 years removed.

For those of us who, like myself, were born in the United States after World War II – the war that succeeded ‘the war to end all wars’; for those of us who were steeped in the notion of unalienable rights, and who were raised during a time when merit and hard work could surmount the hitherto class-stratified and class-imposed obstacles to a fine education and livelihood, our world was a vast improvement over that of the ancients. We believed that our democracy was the fulfillment of the fledgling and exclusionary democracy founded in Athens. We believed in a rule of law that presumed innocence before guilt and that gave even the least of us a fighting chance in a system of justice blind to inequities of social status and money.

I suppose one might say that we were both naive and lucky, and perhaps too, given the inescapable realities of the Vietnam ‘conflict’ (it was, remember, never a declared war, despite the fighting and the death of millions, mostly non-Americans), ignorant of the depraved extent to which a country founded on freedom and principles of justice could embark so relentlessly on martial rampages around the globe.

I was nine years old when JFK was assassinated and I was somehow moved to describe that fateful event in my very first poem, a rhyming poem embarrassing now to recollect, written on the eve of the murder, but which, as I review it with an analytic eye, even then harbored the notion that the killing was a set-up. Call it poetic licence or poetic intuition, but even a child might perceive that the government’s narrative was suspect. My family were no fans of JFK, but they too smelled a rat, and I recall many discussions about the real culprits behind this bloody business – after I had penned my composition.

In the summer after the deaths of Martin Luther King and Robert F. Kennedy, which occurred within a span of two months in 1968, when I was fourteen, I developed a fear of traveling over the bridges that connected Philadelphia to New Jersey. It was, of course, an unconscious reaction to accompany the conscious worries that my country was collapsing.

By the time 9/11 came along I was well into my career as a psychoanalyst and psychiatrist. It didn’t take me very long to determine that the official story was as truthworthy as an advertizing campaign for cigarettes. In the aftermath of the event I remember seething at the airport searches and restrictions that made travel somewhat ominous: how easy it was to use the fist of authority over a compliant populace concerned about safety! By this time we were in another kind of war, the war on terror, which meant that potential enemies were everywhere all the time. Hearing the stentorian loudspeaker announcements at Penn Station in New York, played every five minutes or so, advising us to be watchful of our neighbours and to report suspicious activity as we waited for our trains, made my stomach turn.

Little did I know even then that I had been traveling along a well-defined arc, an arc that has touched home in our current covidian catastrophe, an arc that followed the singular points of State-sponsored assassinations, wars, and spectacular calamities, all of which were designed to induce, foster, fertilize and promote a never-ending state of fear for the purposes of never-ending control.

The abrupt efficiency with which the entire world was shut down in 2020 does not lend itself to an ‘organic’ development, but rather to a fairly well organized and highly successful dictate. The preposterous imposition of a hastily manufactured injection and the seductive and coercive means used to ensure its uptake upon the global population, all while basic of principles of medicine were ignored –principles such as treatment, natural immunity, caution and individualized care – was also not an ‘organic’ process. Doctors who attempted to be doctors by advocating for such principles found themselves under attack: licences were suspended as an example to any like-minded colleagues to make sure to keep their mouths shut lest they suffer a similar fate and lose their livelihoods.

The tools to wield power are more concentrated, far-reaching and facile than ever before. But the personalities who wield power now are no different from those personalities of ancient Rome. If anything, killing is far easier because it can be done with such bloodless and sterile detachment.

How many people have perished from the covid jabs? How many more will die, suddenly or not so suddenly in these coming years?

Worse still, how many of us ordinary folk will go along with this bloody charade, wherein we believe that our ‘masters’ in government and organized medicine have only our good health at heart? In Shakespeare’s rightly famous play about Julius Ceasar, Cassius, referring to Caesar, says to Brutus:

Why, man, he doth bestride the narrow world
Like a Colossus, and we petty men
Walk under his huge legs and peep about
To find ourselves dishonorable graves.
Men at some time are masters of their fates.
The fault, dear Brutus, is not in our stars,
But in ourselves, that we are underlings.
(Julius Caesar, Act 1, Scene 2)

The underlings around us who accepted without question the dissolution of their unalienable rights; the underlings who masked up and didn’t make a peep when they were denied a visit to a dying relative; the underlings who practiced medicine but abandoned their ideals; the underlings who turned blind eyes to apartheid and censorship; the underlings who think that the sudden deaths among children, athletes and otherwise healthy people are ‘normal’; the underlings who still yet refuse to say a bad word about politicians, bureaucrats and billionaires who advise us to eat bugs and work from home and inoculate ourselves with their potions forever – these are the mobs that pose a danger even greater than the orchestrators of the depopulating wealth-shifting so-called ‘reset’ that seeks to enslave its survivors.

Winston Churchill defined an appeaser as ‘one who feeds a crocodile, hoping it will eat him last’.

Let’s keep this in mind as the World Economic Forum meets in Davos. Because our real pandemic is willful naiveté, and our greatest danger cowardice.