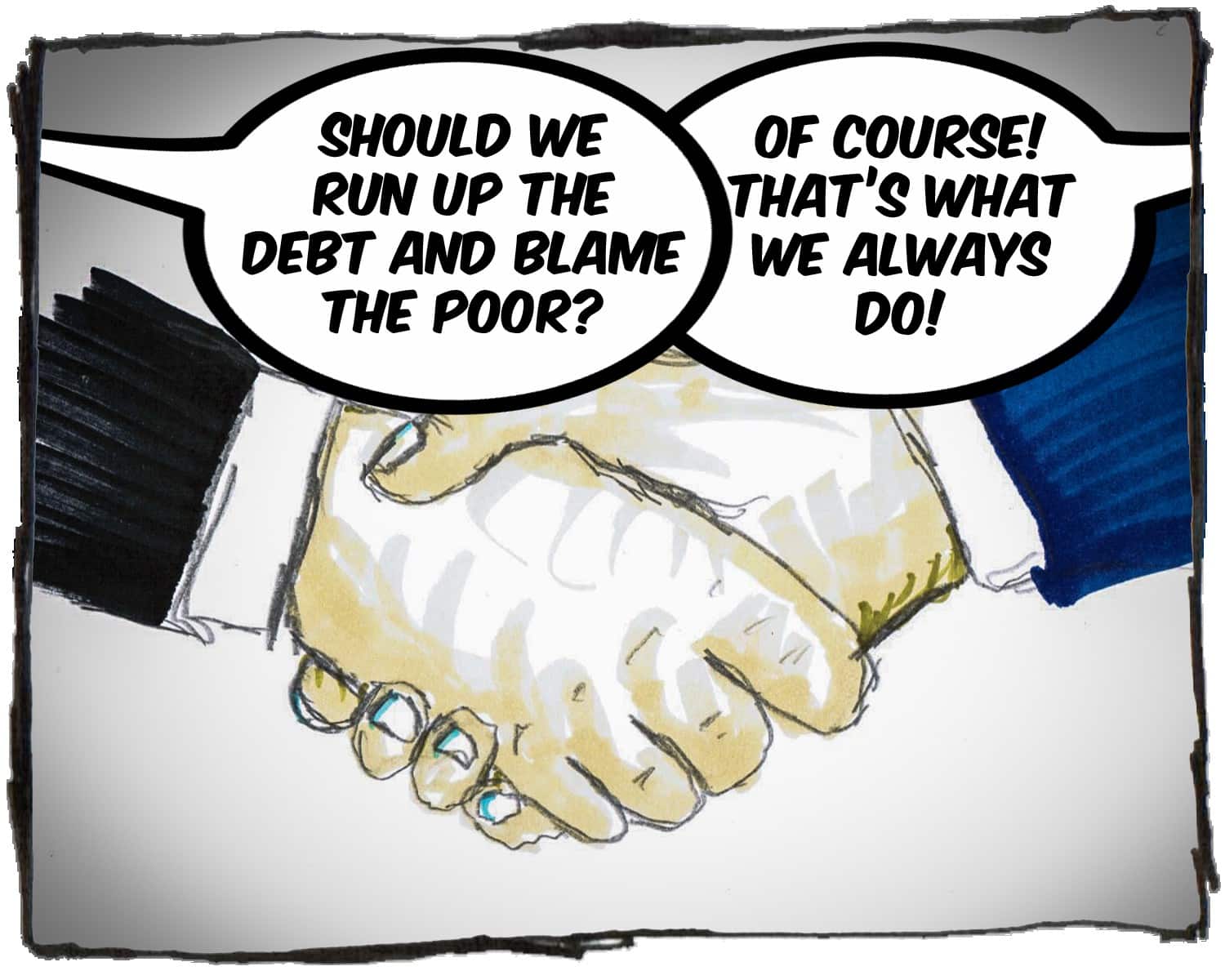 The myth that rich people “worked hard” is fundamental to any system of oppression. This is why rich people immediately turn the full force of their propaganda mechanism to defend themselves at any hint of criticism rigorously.

If you dare to object to wealth hoarders, you’re inundated with comments. People will say that you’re “jealous.” They will say that poor people are “lazy.” The list goes on and on.

Most of us are too busy paying our bills and debts to even stop and think about where the money comes from. The truth is that rich people print up their own money, hand it out to themselves, and then charge us interest for the privilege.

It’s so corrupt that even intelligent people can’t explain how the central bank works. They’ll use many fancy words to confuse you in the hope that you’ll just stop asking questions.

What we have is a massive system of oppression. All you have to do to see who is guilty of oppression is follow the money. Most of what we believe about how the world works is a carefully constructed narrative designed to keep us trapped in a system of servitude from which there is no escape.

Failed businesses that never go away

I’ve lived in this community for ten years. The strip mall is a failed business plan. Why are they building another one?

Your assumption is that somebody must own the strip mall, and it must turn some sort of profit. You think the same thing about the vacant houses in the community. You’d be surprised at how many businesses and properties you see daily are supported by an endless stream of free government money.

For some reason, rich people are never allowed to go broke, even when their businesses fail. They always get bailed out. It’s completely unfair, and there is evidence that it’s happening all around you.

In life, people save up, purchase a house, and spend the rest of their lives paying it off. But that’s only the perspective of poor people. Rich people think about this in a way that’s completely different.

The truth is, there are probably a lot of empty houses in your community that the local banks just sit on. I’ve had a couple of friends cut corners and get stunning deals on houses that they were able to sell later at enormous profits.

If you walk around with an incorrect assumption about the way the world works, you’re never going to get ahead in life. The price of houses is a manipulated market. For all you know, a third of the houses in any given community are sitting empty, and banks are desperate to get rid of them. Ultimately, these banks determine the prices for their benefit and not yours, and somehow that’s not considered “price fixing.”

The old strip mall in my community is probably owned by some bank that’s content to let it fall into disarray. They’re probably also going to be the ones who own the new one. This is all just speculation, of course, but I bet it’s a combination of tax breaks, government loans, and whatnot that the bank is truly concerned with. The actual value of the property doesn’t mean anything to them. It doesn’t matter that the business fails.

That’s not how rich people think.

Their wealth is not connected to work. You can’t ever assume that wealth ever is.

Rail workers have recently had their strike busted by the US government. Most of the stories covering the strike put the blame on the rail workers for “threatening to destroy the US economy.”

The same thing happened in a recent nursing strike. The news reports were quick to point out that kids in trauma care would suffer from a lack of proper medical attention, and the media blamed this on the nurses.

The general public is quickly swayed by nonsensical arguments like this. Honestly, people, is this your first day in America? Our healthcare system is horrible. Adults and children are made to suffer needlessly every day because the medical industry only cares about record profits.

Newspapers could point out that it’s not safe for nurses to be overworked, so a strike is necessary to ensure patients get proper care… but they don’t. They don’t because they’re on the side of the rich jerks who already own the propaganda mechanism.

I don’t know if I saw one article that said, “rich jerks in the rail industry threaten to destroy the US economy.” Nope. They always blame the workers. On top of that, the government steps in on the side of the rich jerks to put an end to the strike.

Tell me again how you can make a discerning assessment of that scenario and come to the conclusion that rich people “earn” their money.

If you’re black, open up your wallet and take a look at how much money you have. It’s important to understand that, as a general trend, for every dollar, a black person has, a white person has ten.

That’s how much the white guy who owns that house gets when he sells it. Remember that before he got it, it was probably sitting vacant and owned by a bank. He got it as a favor. You had to pay for yours.

Money is a construct to make people turn over their labor. When you make people desperate for money, they turn over more labor for even less compensation. This has been going on in the United States of America for hundreds of years.

Well, that would mean they’d have 20 trillion dollars.

Where are the other 15 trillion dollars?

Everyone in our society needs to make a radical change in their perspective. If you see somebody driving around in a nice car or living in a nice house, you can’t think, “Wow, what did that guy do to earn that wealth?”

Instead, you need to make it instinctive to think, “Wow, who did that guy exploit to steal all that stuff?”

When you say something like that, people instantly accuse you of “class warfare.” They’ll say you want to “punish” people for doing well.

It’s ridiculous to assume that somebody who is sitting on a pile of money had to face the same challenges that you did. Even people who are flat broke have had some semblance of an experience where money has come easy. Remember when we got our stimulus checks? We got $1,400 from the government for doing nothing.

From that, you know that the government is capable of just handing out money.

Some people get $1,400 checks from the government every day (and that’s on the low end)!

The stock market before the midterms

Gee, do you think the performance of the stock market was connected to the election? I do.

For the whole year, the media was talking about how we were looking at a recession. The minute the voting was over, we were in a bull market.

What I think happened is that rich people wanted a Republican “red wave.” Republicans have historically passed huge tax breaks and handed out free money to rich people. So, these same rich people used their power and influence to boost inflation and tank the market.

That’s not that hard to believe, is it? When you have people who control billions of dollars, they can sell shares and tank the price of stocks. That leads to panic selling and a collapsing economy. These are the games rich people play because they can control stock prices as easily as adjusting the volume on their television.

But tell me again how that’s “fair.”

I think rich people fabricated a recession, pushed inflation, and were intentionally working to collapse the economy in order to get Republicans elected. They were mad because Biden got in on a progressive agenda, and they wanted to punish us. But the minute the midterms were over. They put their money back into the stock market, and, voila, prices were restored.

It would be comical except for the fact that it was people’s lives that were being played with.

The simple fact of the matter is that the only way to stop oppression is to give power to the powerless. You can discuss any other tactic you want, but at the end of the day, the only thing that works is providing individuals with the opportunity to defend themselves.

People who are forced to live in poverty simply don’t have the means to demand better wages. They have to take whatever they can get because their backs are against the wall. It’s oppression. It’s exploitation. It’s robbing people of their dignity.

This is the way the United States is structured.

I’m fearful that the tiny percentage of obscenely rich people in our country are close to having so much wealth that elections will stop having any impact. Even though the Democrats did better than expected in the midterms, the Republicans still essentially control everything. It also must be said that too many Democrats are just as bad as the Republicans. Poor people don’t have much of a voice in our government.

We have to change the narrative

Call it out when rich people blame the workers for the negative impact of a strike. That blame should be on the rich people.

Call it out when rich people give themselves massive tax breaks and then blame the poor when the nation spirals into debt.

Call out the class warfare that rich people have waged against the poor since the beginning of recorded history.

Rich people are not to be admired. They control everything. They run everything. They don’t do any work. Absolutely every disparagement that they throw at poor people actually applies to them.

It’s time to step outside of their carefully crafted illusion and discuss the reality of the world. You know rich people are dishonest simply by virtue of the fact that they are rich. They don’t deserve our admiration. They deserve only our contempt.

When you start perceiving the world as it actually is, you are better equipped to make a positive change. Don’t admire the rich. They don’t deserve it. There are no exceptions.