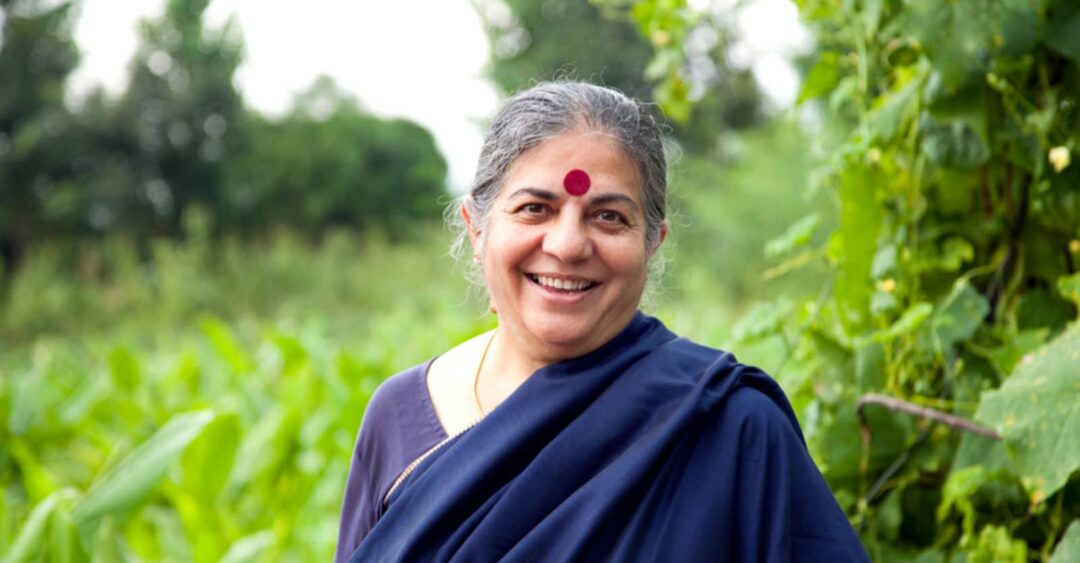 Miss a day, miss a lot. Subscribe to The Defender’s Top News of the Day. It’s free.

In an in-depth, broad-ranging interview with The Defender, Dr. Vandana Shiva discussed the central tenets of Navdanya, an organization that supports farmers in India who have successfully resisted corporate domination of agriculture.

Shiva’s work and writings have inspired individuals and communities around the world for decades.

In the foreword of a recent report by Navdanya International, “The Corporate Push for Synthetic Foods,” Shiva highlighted a recurring theme in her struggle to develop organic agricultural practices: “Artificial food advocates are reiterating the old and failed rhetoric that industrial agriculture is essential to feed the world.”

“Real, nutrient-rich food is gradually disappearing, while the dominant industrial agricultural model is causing an increase in chronic diseases and exacerbating climate change.

“The notion that high-tech, ‘farm-free’ lab food is a viable solution to the food crisis is simply a continuation of the same mechanistic mindset which has brought us to where we are today — the idea that we are separate from and outside of nature.”

In her interview with The Defender, Shiva began with an overview of the ongoing destructive behavior of a long-standing, profit-oriented attitude of wealthy and powerful interests.

“How is it that the British thought the forest was just their timber mine? How could they, having destroyed their oak forests, declare the forests of India their property? Where does that come from?

“Quite clearly a colonizing mindset that ‘anything, anywhere is mine’ — and the idea of separation from nature, that ‘I can conquer nature — I can own the seed.’”

Shiva’s understanding of economics and corporate greed is grounded in her knowledge of quantum physics. Her description of the cause and effect of materialistic aggression represents a unification theory, detailing the elements of human degradation.

She described this destructive behavior:

“The very idea of thinking you are separate from, and superior to others is a thinking of petty minds. And petty minds create conflicts. Petty minds have the urge to take what belongs to others. It creates the limitlessness of wanting to own more and more.

Shiva’s knowledge of history is based on her analysis of economic and psychological dysfunction. She spoke about a syndrome that has allowed an eclipse of compassion:

“When you’re disconnected and you’ve put owning first, you objectify the others; you made women your property, you made indigenous people your slaves, you made Mother Earth your private property. All of this then allows you simultaneously to give freedom to harm.

“I would call it moral anesthesia. If I’m living, then I’ll feel the pain of everything around me. But if I’m anesthetized by greed, by power, I will not feel that pain. So in a way, the rich and powerful are living under the anesthesia of cruelty.”

Coming from her critical understanding of a world dominated by greed, Shiva’s desire to heal the planet embraces the creative paradigms lost to much of the modern world.

The “9 Sutras of Self-Reliant India,” as outlined on the Navdanya website, present the wisdom and knowledge of the past and a clear vision of how seed, food and human survival are intertwined.

Describing the importance of seeds both practically and symbolically, Shiva said:

Shiva is passionate about the importance and right of the farmer to save and share seeds. She has battled giants like Monsanto and their attempts to modify and patent seeds.

In her view, the forced, corporate, profit-oriented methodology of agricultural practices has a detrimental effect, rather than supporting the world’s food supplies.

“Today’s seeds are created for owning. When you own something and you want to sell it, you don’t care what’s in it. When you’re going to grow a seed and eat it, you make sure it’s the highest quality.”

Shiva emphasized the importance of appreciating the symbolic nature of seeds.

Seed as a metaphor threads through the “9 Sutras.” Shiva explained why diversity, freedom from chemicals and traditional organic practices yield soil health and provide the foundation of human vitality.

According to Shiva, information about food is misrepresented by corporate interests. She said:

“The international trade data won’t show it to you, because the trade data only measure the container ships that are leaving from one port to another port. The real thing to measure is the farms. And even the United Nations [Food and Agriculture Organization] admits that 80% of the food we eat comes from small farms. Only 20% comes from the industrial system.”

She encourages these farms to return to practices relying on ancient knowledge and new understanding of the importance of fungi in the soil — both of which support organic methodologies.

Shiva’s emphasis on organic techniques comes from years of practice and research.

She also understands how the chemical industry and governments have manipulated the labeling and pricing of organic products.

“The chemical industry that came out of profits of war and commerce has always been contesting with organic. And they did three things. The first is they, of course, privileged themselves — half of Europe’s money is spent on subsidizing chemicals and industrial inputs. In the United States, all the subsidies go to industry. So what is a very high-cost production becomes cheap.

“The second thing they did was create rules, create conditionalities, that became more and more difficult for organic farmers. The spray of poisons you never have on a label. This apple has this pesticide and this herbicide — that’s what should be true labeling.

“Instead, the poor organic farmer has to spend huge amounts of money for certification — to prove ‘I didn’t use the chemicals.’ We should be knowing what the chemicals are, and then avoiding them.

“And the third thing that they did was [promote] monocultures. So in a different kind of way, chemical monocultures drive the depression of prices of the food produced with high-cost inputs. And they make it artificially look like organic is expensive.

“And that’s how the false story of chemical versus organic has grown, and the worst is really, what we are witnessing right now — in every field — censorship has constantly turned to make it look like the real science of life is unscientific.”

In evaluating the ongoing challenges facing humanity, Shiva proposed solutions based on a recognition that humans are an inseparable part of nature.

“The industrial system merely has knowledge on how to extract and kill. And here you are, your life is at stake. There’s a pandemic happening. You want to eat.

“And no matter how much propaganda is done, there’s nothing like natural immunity. Every system has resilience and immunity. That is the capacity to be healthy. The minute a living system is a living system, having health through immunity is part of its nature.

“To deny it is part of the denial, like chemical fertilizers are the only way you can grow food. And, you know, centuries of denialists rule the world, not just by falsehoods and science, but by bullying, by ugly, ugly bullying.”

Shiva said she has a clear vision of what constitutes a healthy economy. It is in contradiction with a profiteering methodology and evaluating success based on ownership.

From seeds to biodiversity — to healthy living and productive economies — Shiva’s vision of the world is based on the concept of a human family that inhabits the Earth.

“An evolved mind sees the Earth as one family. And our word for this is Vasudhaiva Kutumbakam — this is Navdanya’s philosophy of organizing. Five hundred years of colonial thinking and extractive logic is economics built on competition. You’re made to feel, ‘if I don’t take more, I’ll have less.’

Although she sees the patterns of colonialism and greed have dominated the planet, Shiva said she believes humans have the ability to overcome centuries of repression and delusion with compassionate, awakened behavior.