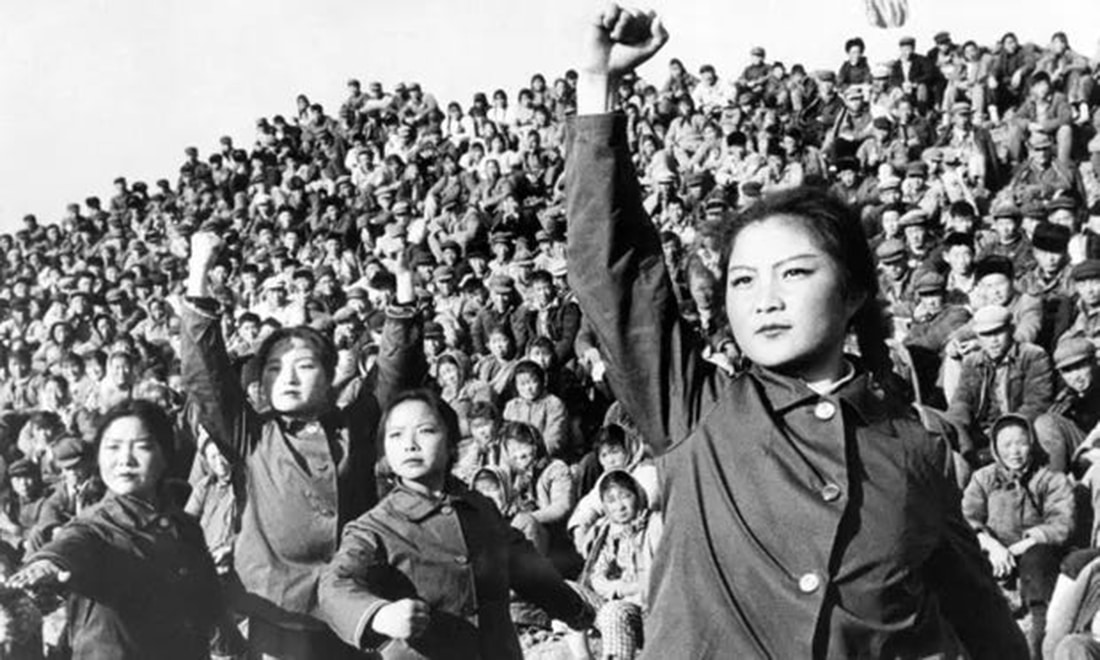 One aspect of dictatorships that citizens of democratic nations often find puzzling is how the population can be convinced to support such dystopian policies. How do they get people to run those concentration camps? How do they find people to take food from starving villagers? How can they get so many people to support policies that, to any outsider, are so needlessly destructive, cruel, and dumb?

The answer lies in forced preference falsification. When those who speak up in principled opposition to a dictator’s policies are punished and forced into silence, those with similar opinions are forced into silence as well, or even forced to pretend they support policies in which they do not actually believe. Emboldened by this facade of unanimity, supporters of the regime’s policies, or even those who did not previously have strong opinions, become convinced that the regime’s policies are just and good—regardless of what those policies actually are—and that those critical of them are even more deserving of punishment.

One of history’s great masters of forced preference falsification was Chairman Mao Zedong. As László Ladány recalled, Mao’s decades-long campaign to remold the people of China in his own image began as soon as he took power after the Chinese Civil War.

By the fall of 1951, 80 percent of all Chinese had had to take part in mass accusation meetings, or to watch organized lynchings and public executions. These grim liturgies followed set patterns that once more were reminiscent of gangland practices: during these proceedings, rhetorical questions were addressed to the crowd, which, in turn, had to roar its approval in unison—the purpose of the exercise being to ensure collective participation in the murder of innocent victims; the latter were selected not on the basis of what they had done, but of who they were, or sometimes for no better reason than the need to meet the quota of capital executions which had been arbitrarily set beforehand by the Party authorities. From that time on, every two or three years, a new “campaign” would be launched, with its usual accompaniment of mass accusations, “struggle meetings,” self-accusations, and public executions… Remolding the minds, “brainwashing” as it is usually called, is a chief instrument of Chinese communism, and the technique goes as far back as the early consolidation of Mao’s rule in Yan’an.

This decades-long campaign of forced preference falsification reached its apex during the Cultural Revolution, in which Mao deputized radical youths across China, called Red Guards, to purge all vestiges of capitalism and traditional society and impose Mao Zedong Thought as China’s dominant ideology. Red Guards attacked anyone they perceived as Mao’s enemies, burned books, persecuted intellectuals, and engaged in the systematic destruction of their country’s own history, demolishing China’s relics en masse. 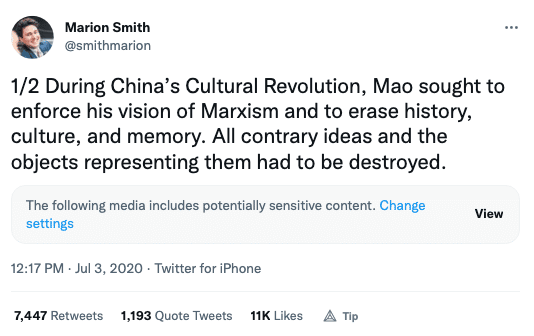 Through this method of forced preference falsification, any mass of people can be made to support virtually any policy, no matter how destructive or inimical to the interests of the people. Avoiding this spiral of preference falsification is therefore why freedom of speech is such a central tenet of the Enlightenment, and why it is given such primacy in the First Amendment of the US Constitution. No regime in American history has ever previously had the power to force preference falsification by systematically and clandestinely silencing those critical of its policies.

Until now. As it turns out, an astonishing new release of discovery documents in Missouri v. Biden—in which NCLA Legal is representing plaintiffs including Jay Bhattacharya, Martin Kulldorff, and Aaron Kheriaty against the Biden administration for violations of free speech during Covid—reveal a vast federal censorship army, with more than 50 federal officials across at least 11 federal agencies having secretly coordinated with social media companies to censor private speech.

Secretary Mayorkas of DHS commented that the federal Government’s efforts to police private speech on social media are occurring “across the federal enterprise.” It turns out that this statement is true, on a scale beyond what Plaintiffs could ever have anticipated. The limited discovery produced so far provides a tantalizing snapshot into a massive, sprawling federal “Censorship Enterprise,” which includes dozens of federal officials across at least eleven federal agencies and components identified so far, who communicate with social-media platforms about misinformation, disinformation, and the suppression of private speech on social media—all with the intent and effect of pressuring social-media platforms to censor and suppress private speech that federal officials disfavor.

The scale of this federal censorship enterprise appears to be far beyond what anyone imagined, involving even senior White House officials. The government is protecting Anthony Fauci and other high level officials by refusing to reveal documents related to their involvement.

Federal officials are granted privileged status by social media companies for the purpose of censoring speech on their platforms, and officials hold weekly meetings on what to censor.

These federal bureaucrats are deeply embedded in a joint enterprise with social-media companies to procure the censorship of social-media speech. Officials at HHS routinely flag content for censorship, for example, by organizing weekly “Be On The Lookout” meetings to flag disfavored content, sending lengthy lists of examples of disfavored posts to be censored, serving as privileged “fact checkers” whom social-media platforms consult about censoring private speech, and receiving detailed reports from social-media companies about so-called “misinformation” and “disinformation” activities online, among others.

Social media companies have even set up secret, privileged channels to give federal officials expedited means to censor content on their platforms.

For example, Facebook trained CDC and Census Bureau officials on how to use a “Facebook misinfo reporting channel.” Twitter offered federal officials a privileged channel for flagging misinformation through a “Partner Support Portal.” YouTube has disclosed that it granted “trusted flagger” status to Census Bureau officials, which allows privileged and expedited consideration of their claims that content should be censored.

Many suspected that some coordination between social media companies and the federal government was occurring, but the breadth, depth, and coordination of this apparatus is far beyond what virtually anyone imagined. And the scale of this censorship apparatus raises troubling questions.

How could so many federal officials be convinced to engage in the clandestine censorship of opposition to tin-pot public health policies from China which have killed tens of thousands of young Americans and—let’s be honest—were never really that popular to begin with? The answer, I believe, is that high-level White House officials such as Anthony Fauci must have been simultaneously threatening social media companies if they did not comply with federal censorship demands, while also threatening entire federal bureaucracies if they did not toe the Party line.

By simultaneously threatening both the federal bureaucracy and social media companies, a handful of high-level officials could effectively transform the federal government into a sprawling censorship army reminiscent of Mao’s Red Guards, silencing any opposition to tin-pot public health policies with increasing detachment and certitude as this systematic silencing falsely convinced them that the regime’s policies were just and good. A few of these federal employees must have eventually let slip to the Republicans that this jawboning was taking place, which appears to have been how this suit began.

Hyperbole and exaggeration have been common features on both sides of covid policy disputes. But I can say with all soberness and circumspection (and you, kind readers, will correct me if I am wrong here): this evidence suggests we are uncovering the most serious, coordinated, and large-scale violation of First Amendment free speech rights by the federal government’s executive branch in US history. 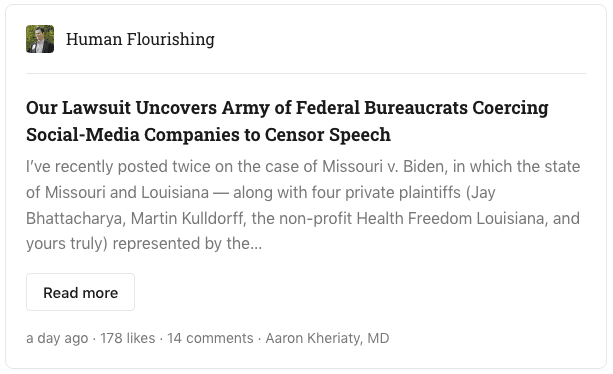