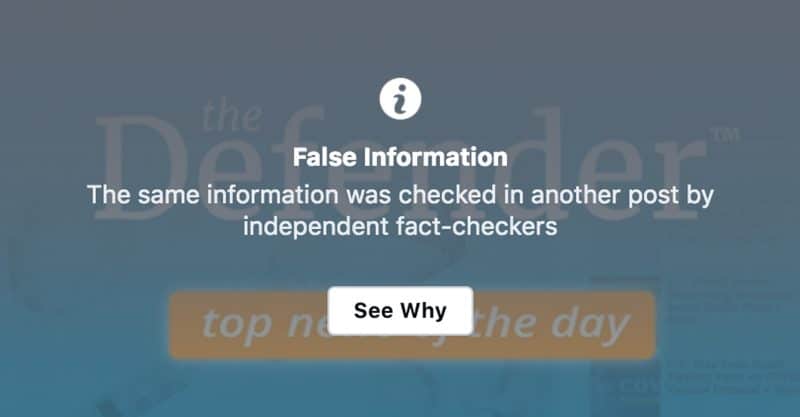 The Facebook whistleblowers alleged the company is pushing an initiative to censor vaccine hesitancy on its platform.

According to new leaked documents, the social media giant uses algorithms to target users who disseminate messaging that runs counter to the company’s political ideology and vaccine narrative — even if the comments are factually accurate.

An internal memo obtained by Project Veritas explained “Vaccine Hesitancy Comment Demotion.” O’Keefe told Sean Hannity on Monday that Facebook initiated a “beta” test for the algorithm that classifies some users under two incremental tiers of what they dub “vaccine hesitancy” or a “VH Score,” and does so without the user’s knowledge.

The stated goal of the new feature is to “drastically reduce user exposure” to “VH” comments, O’Keefe’s team reported, and decrease “other engagement of VH comments including create, likes, reports [and] replies.”

The insider, who is described by O’Keefe as a “data center technician” for Facebook, revealed the tech giant was running the “test” on 1.5% of its 3.8 billion users with the focus on the comments sections on “authoritative health pages.”

“They’re trying to control this content before it even makes it onto your page, before you even see it,” the insider told O’Keefe.

Another leaked document addressed “Borderline Vaccine Framework,” which classifies content with another expressed “goal” to “identify and tier the categories of non-violating content that could discourage vaccination in certain contexts, thereby contributing to vaccine hesitancy or refusal.” The framework states: “We have tiered these by potential harm and how much context is required in order to evaluate harm.”

The ratings are divided into two tiers: “Alarmism & Criticism” and “Indirect Vaccine Discouragement,” which includes celebrating vaccine refusal and “shocking stories” that may deter others from getting vaccinated even if events or facts are potentially or actually true.

The algorithm flags key terms in comments to determine whether or not it can remain in place, but allows human “raters” to make a ruling if the algorithm cannot do so itself.

The first whistleblower told O’Keefe that Facebook, led by CEO Mark Zuckerberg, wants to “build a community where everyone complies — not where people can have an open discourse and dialogue about the most personal and private and intimate decisions.”

“The narrative [is] get the vaccine, the vaccine is good for you, everyone should get it. If you don’t, you will be singled out as an enemy of society.”

In response to the leaked documents, Facebook told Project Veritas, “We proactively announced this policy on our company blog and also updated our help center with this information.”

O’Keefe, however, said the change in policy has largely been private while Facebook holds itself out as being a free speech town square.

“So the VAERS is a Vaccine Adverse Events Reporting System. It looks like [Facebook] is measuring the comments where they’re mentioning where, you know, that the patient died,” said the Facebook whistleblower. “Really they [the CDC] support all of this because you know they release the standards, the CDC themselves. And that’s really one of, one of the primary things that Facebook is basing their policy off of.”

Under Facebook’s Borderline Vaccine Framework, content pointing to VAERS data is censored because it suggests “extreme risk without providing context.”

The insider said Facebook is open about the fact they’re coordinating with the CDC.

The complaint alleges Facebook has “insidious conflicts” with the pharmaceutical industry and health agencies, and details factual allegations regarding the CDC, CDC Foundation and the World Health Organization’s extensive relationships and collaborations with Facebook and Zuckerberg, calling into question Facebook’s collaboration  with the government in a censorship campaign.

Lawyers for Children’s Health Defense are awaiting the ruling of Judge Susan Illston after defendants’ filed a motion to dismiss in the CHD lawsuit alleging government-sponsored censorship, false disparagement and wire fraud.