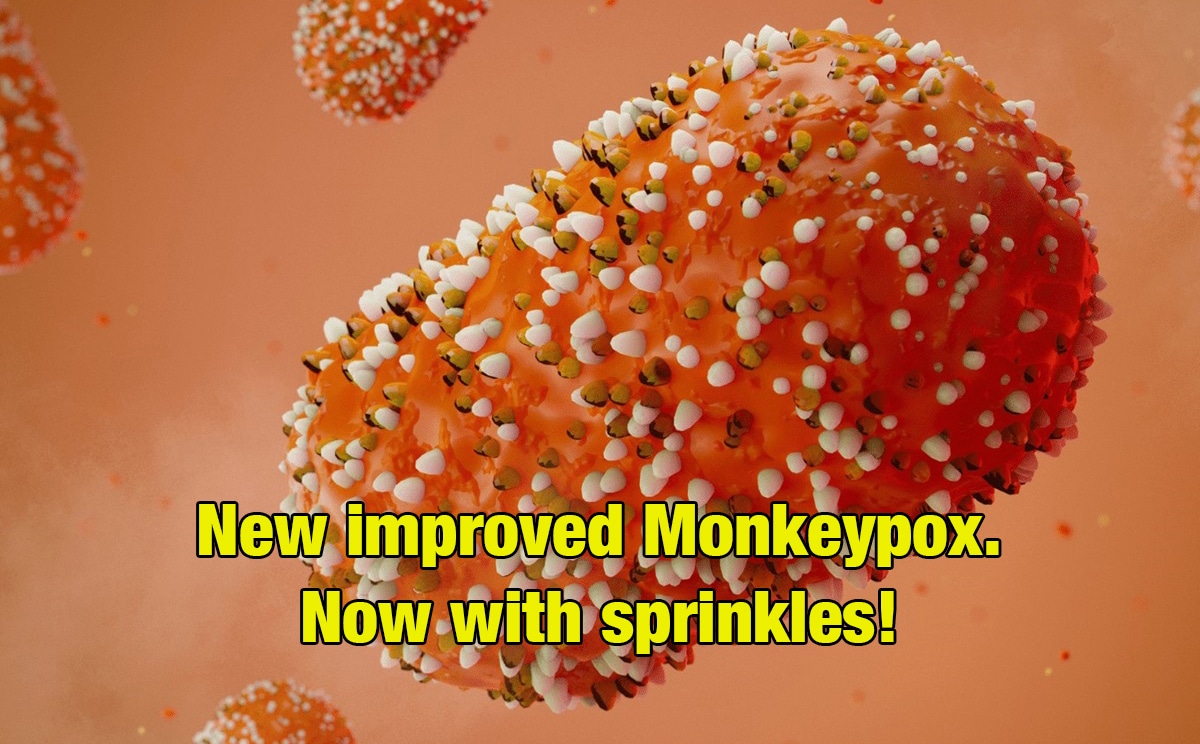 How the Monkeypox Scam Mirrors the COVID Scam—Unbelievable

The vaccine does not prevent infection

Just like the COVID vaccines, turns out that in the animal experiments, the Jynneos vaccine did not stop monkeys getting monkeypox, but did stop them from dying.  Since the current strain of monkeypox is mild, and virtually no one dies from monkeypox, this is another reason to avoid these dangerous vaccines like the plague—they won’t stop the infection!

According to the CDC ‘s briefing to its advisory committee on June 23, which I attended, this is generally a mild disease, requires no specific treatment, and the people who were hospitalized were hospitalized for pain control. (For example, perirectal lesions can induce painful sphincter spasms.)

So, in terms of deaths, in 2022 there are now a total of 5 deaths that have been associated with Moneypox reported outside Africa, and 4 reported from Nigeria. I found only two for which there was discussion of cause of death: the Brazilian had lymphoma (lymph cancer), and the person from Peru died of a preexisting condition. We know nothing about what killed the other seven.

CDC began a study of the Jynneos vaccine in the DRC in 2017 and finished recruiting by September 2020, according to the required notification in ClinicalTrials.gov. The idea was to vaccinate people most susceptible to monkeypox and see how many got monkeypox, and what the side effects were. CDC has a lot of data, and the person who briefed the advisory committee on June 23, Brett Peterson, is the Principal Investigator of this Congo trial. Where is CDC’s briefing on this study’s results? This was the first study of vaccine efficacy in the world—why is CDC being coy about the results?

Two of the same scientists who hyped the natural origin of COVID are now trying to explain the excessive number of mutations in the current Moneypox variant, which appears to be derived from a strain isolated in labs in 3 countries in 2018-9. Double-stranded DNA viruses don’t usually mutate this fast…since we have a 2018 start date, the mutations expected could be calculated. A lot of the mutations could have been induced by an enzyme used in labs. See DoorlessCarp’s June 5 update for more on the science.

The two people are Andrew Rambaut and Michael Worobey. Rambaut was one of the 5 authors of the Nature Medicine article that Tony Fauci caused to be written, to cover up the lab origin that Fauci himself funded. Worobey just published an article claiming—despite everything—that COVID came from nature. Now they are doing the same for Monkeypox.

US Government has created a fake shortage of vaccine

Well yes, of course, they always do that to fan the flames of demand.

But this is a lot bigger than that. The USG already owns 16 million doses, stored frozen in Denmark, and had spent well over $1 Billion on Jynneos vaccines before Moneypox was identified in the west.

Despite the Denmark factory’s “fill and finish” facility being completed in 2021, and despite the USG allotting $44 million for “qualification” of that same facility in January 2019, the FDA only got around to finishing its inspection on July 27, 2022.

Supposedly this prevented the US from getting its hands on any of its supply stored overseas. Duh? And the USG ordered 1.4 million doses as recently as 2020, yet to be delivered.

Meantime, President Biden asked for another $7 Billion for the $Moneypox emergency. No wonder they plan to change the name of Moneypox, which is said to be stigmatizing to Africans. They mislead. It is stigmatizing to politicians.

Because of the vaccine shortage, existing vaccine will get a liability waiver

How sweet is that?

Jynneos is licensed, and is being used for its labelled indication (prevention of Moneypox) so the manufacturer is liable for injuries. The USG might also be liable, if it steered you wrong about the safety or efficacy of the vaccine…or if it hid a study it had conducted, for example.

But since we have a shortage, the USG in its benevolence and wisdom is going to dilute it and give recipients instead a 20% dose, administered intradermally instead of subcutaneously. But in order to make this kosher (kosher for whom?) the DHHS and FDA are issuing the vaccine an emergency use authorization, and we all know what that means. You can’t sue anybody even if the vaccine kills you.

You can apply to DHHS for small benefits from its Countermeasures Injury Compensation Program, but you might be waiting a long time for an answer. The program has denied about 95% of petitioners, and no one has received a payout for a COVID vaccine injury yet.

This also means that a USG contractor will now be inserted between the Danish manufacturer and the recipient. I wonder what diluent the USG will instruct them to add, or supply itself, for that matter?