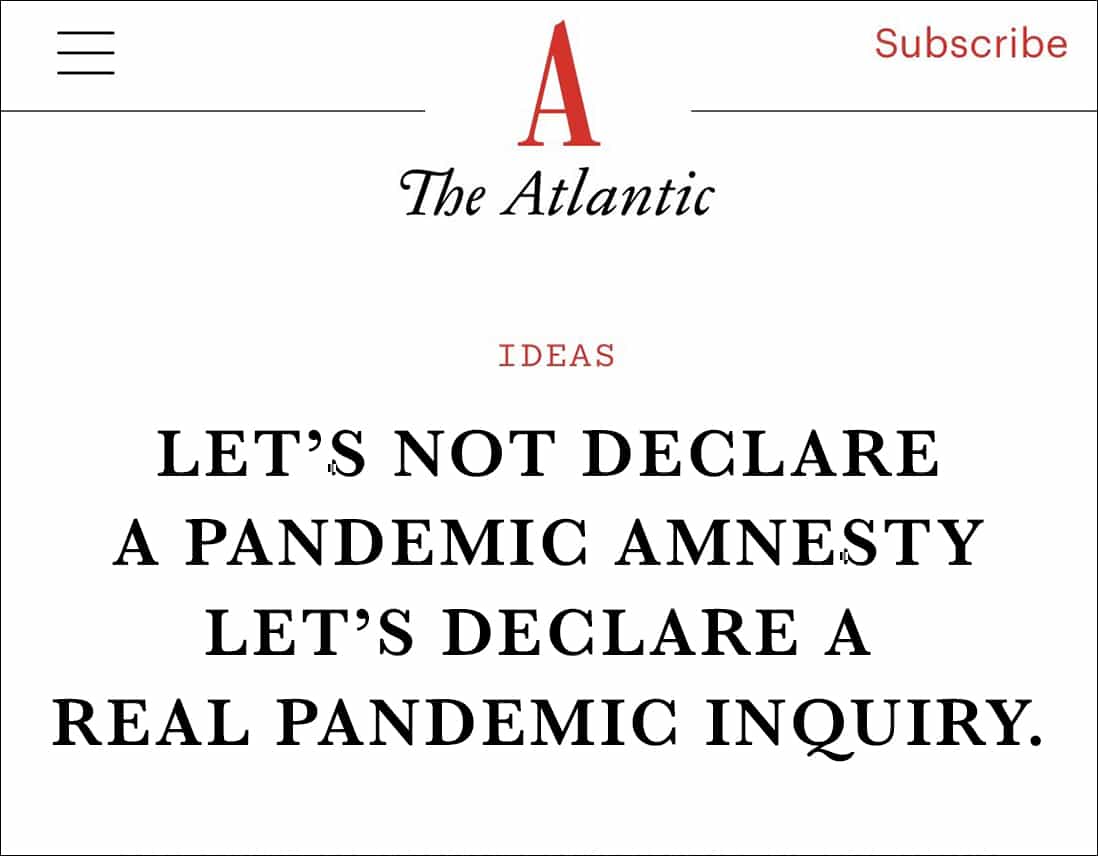 I’ll admit, I nearly spit out my coffee when I saw Brown Professor Emily Oster’s new headline in The Atlantic this morning. It’s the headline we’ve been waiting to see—and, in the revisionist, gaslighting style that’s become the journalistic norm on the response to Covid—it’s about the closest thing to an outright admission of guilt that we’ve seen since Covid began. 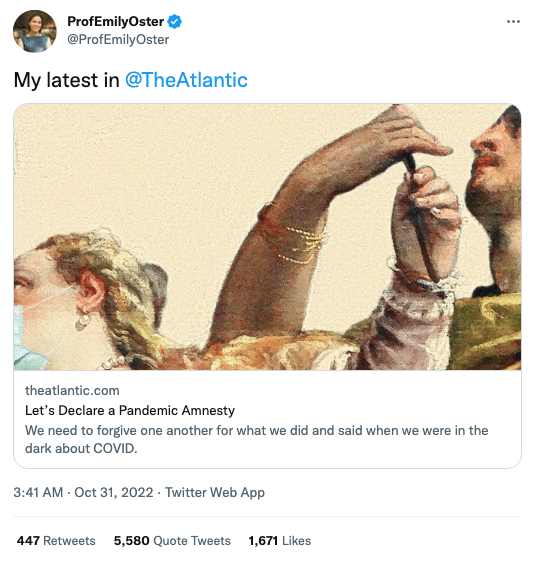 The article is about as pathetically transparent as it is self-serving. Gee, I wonder what Oster did and said during Covid for which she might want amnesty…

There’s a lot wrong here. First, no, you don’t get to advocate policies that do extraordinary harm to others, against their wishes, then say “We didn’t know any better at the time!” Ignorance doesn’t work as an excuse when the policies involved abrogating your fellow citizens’ rights under an indefinite state of emergency, while censoring and canceling those who weren’t as ignorant. The inevitable result would be a society in which ignorance and obedience to the opinion of the mob would be the only safe position.

Second, “amnesty,” being an act of forgiveness for past offenses, first requires an apology or act of repentance on the part of those who committed the offense. Not only has no such act of repentance been forthcoming, but in most cases, establishment voices like Oster’s have yet to stop advocating these same policies, much less admit they were wrong. With no accompanying act of contrition, these calls for “amnesty” in light of rapidly-shifting public opinion have a real ring of fascist leaders calling for “amnesty” after losing the War.

Third, there’s some question as to whether Oster herself really did know better at the time. Like many other mainstream Covid voices, Oster had long been closely attuned to Covid data showing that these mandates did not work, yet she often seemed reluctant to share that data insofar as it contradicted the mainstream orthodoxy that mandates were necessary. In that sense, the policy prescriptions of Oster and those like her may have had less to do with ignorance than with cowardice, tribalism, and “following orders,” which can’t be considered acting “in good faith.”

And that leads to the ultimate problem, from a legal perspective, with Oster’s call for “amnesty” for the advocacy of totalitarian policies during Covid: The implicit assumption that all those who advocated lockdowns, mandates, censorship, and an indefinite state of emergency, all the way up the chain of command, did so in good faith. If those who advocated these policies are simply presumed to have done so out of well-meaning ignorance, then any inquiry into the many outstanding questions as to the origin of these policies—and the underlying motivations of highest-level officials who promulgated them—is foreclosed.

The implicit assumption is that, owing to their socioeconomic status, the superficial cutesiness of public health, and the panic surrounding the pandemic, all those who advocated these mandates must have done so in good faith. But this argument presupposes that the “pandemic” was a natural phenomenon, like a tsunami, which would have inevitably led to panic. On the contrary, studies have long shown that it was the mandates themselves that caused the public to panic, making them believe their chances of dying of Covid—which never had an overall infection fatality rate much higher than 0.2%—were hundreds of times greater than they really were. Further, there’s a growing mountain of evidence that the handful of key officials who led the initial push for unprecedented lockdowns and mandates did not, in fact, do so in good faith.

Our institutions are in serious need of restoration after the incalculable damage that’s been done to them during the response to Covid. But we forget, at our peril, that those institutions weren’t built with flowery words and good intentions. They were built with blood, sweat, and tears, by those who fought for them with their lives. Let’s not declare a pandemic amnesty. Let’s declare a real pandemic inquiry.