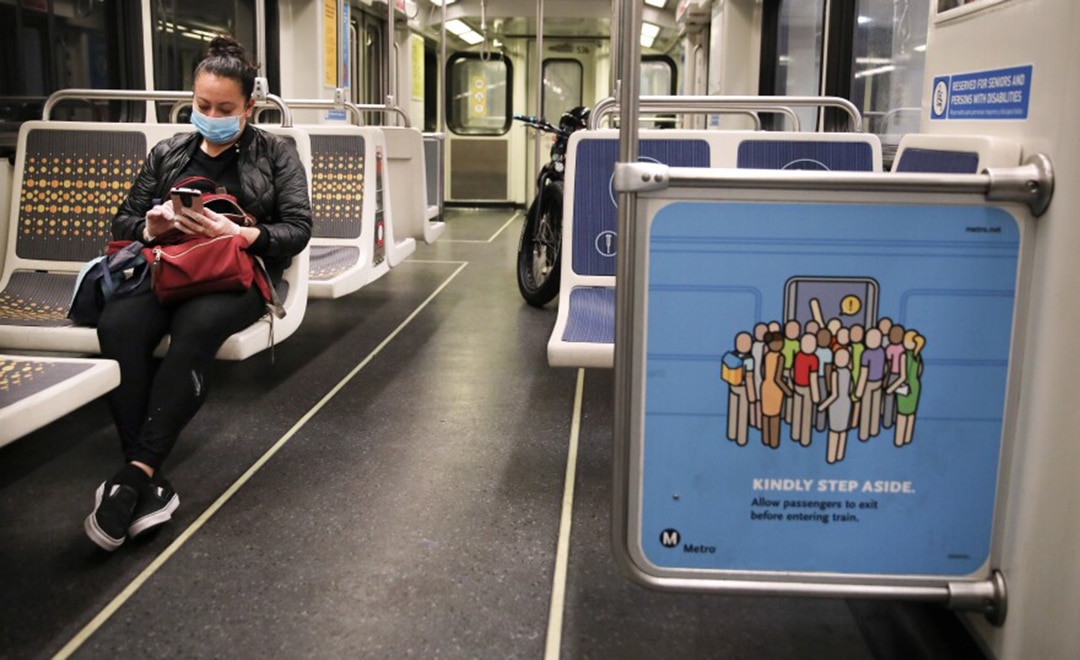 Philadelphia and Los Angeles Are the Future of Masking

San Diego’s nickname is “America’s Finest City.” Whether you agree with that designation or not, there are few people in the United States who would argue for including Philadelphia or Los Angeles on the list of “finest” locations in the country.

But their fanatical dedication to COVID policy has taken cities that already struggle with crime, homelessness, poor quality of life or high cost of living and made them even more uninhabitable.

They’ve enforced mask mandates, outdoor mask mandates, discriminatory vaccine passports, engaged in reckless fear mongering and in the case of Los Angeles, created one of the largest self-owns in covid “history” — LAPublic Health surveyed over 1,500 businesses during a one week period in December 2021 and proclaimed that “high masking compliance” was keeping the region “safe.”

Those aren’t my words, that’s their words:

Public and business sector masking compliance is high, indicating the broad understanding that this small behavior change adds a layer of protection that enables us to engage in our customary activities without endangering ourselves or others. Public Health regularly conducts site visits to assess mask compliance across a variety of L.A. County businesses, during which we determine compliance among customers, employees and their staff, and overall safety requirements. Out of more than 1500 site visits conducted between December 4th-10th, the vast majority of businesses and industries, including restaurants, bars, food markets and hair salons, had masking compliance rates above 95%.

“Masking requirements reduce transmission without much disruption to people’s routines and allow businesses to reduce risk for their customers, and workers,” said Barbara Ferrer, PhD, MPH, MEd, Director of Public Health. “We would like to express our sincere appreciation to the business community of L.A. County for leading by example on masking as champions for public health. The take home message is clear: masking creates safety for employees and customers, reduces COVID transmission in our communities and helps everyone stay safe here in L.A. County.”

It’s hard to be more demonstrably wrong than this.

LA public health officials specifically credited the high rate of mask wearing with keeping cases low and residents “safe,” only to see this remarkable compliance prove the uselessness of masks once again.

Of course, there were no press releases from Barbara Ferrer in the months afterwards acknowledging that the demonstrably high rates of mask usage are clearly meaningless, and that based on her own department’s exhaustive site checks, masks provide no “protection” for others.

And more importantly, after the mask mandate and vaccine passport requirements were lifted, despite Ferrer’s best efforts, cases plummeted to the same low levels seen in previous years:

Cases are as low this spring as they were in previous springs, despite LA finally resembling something close to normalcy.

I haven’t been able to find any press releases reporting how the mask mandates and vaccine passports failed to prevent the largest surge of infections the county had seen, and that removing these destructive policies did not lead to a new surge.

Unsurprisingly, Ferrer has not commented on the fact that a complete lack of “interventions” is apparently just as “protective” as the city’s obsessive need for theatrical policies.

In a recent court case that most Americans should be aware of by now, the CDC’s mask mandate in transportation settings was removed. Finally a victory for common sense and the separation of powers inherent in the US government.

I’ve written previously about how utterly useless the policy is and always has been: 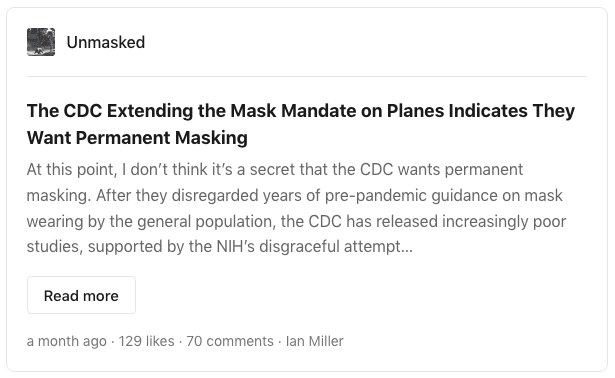 There is no epidemiological, data driven or evidence based justification for continuing to force people to mask at airports, bus stations and on planes, trains and buses.

So of course, that’s exactly what Los Angeles did.

Initially, local transit agencies went along with that Florida judge’s ruling, allowing the federal rule enforcing masks on planes, trains, buses and other ways of getting around to lapse. Masks became optional.

But that changed with Thursday’s announcement from the county health department.

The LA Metro immediately announced they would be enforcing masking on the subway (yes LA has one) and buses: 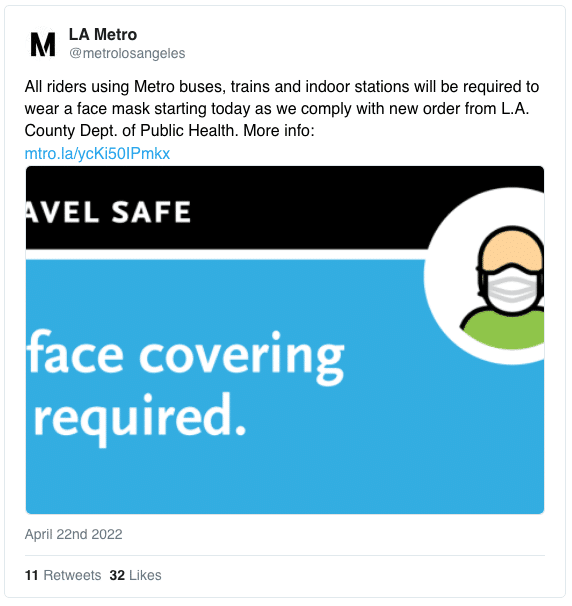 As with nearly all masking policy, this highlights the danger of allowing public health officials and politicians the authority to maintain the disproven narrative that masks work or that mandates are remotely beneficial.

This is exactly why I and many others continue to write about these issues, exposing their lies and misrepresentations — they must not be allowed to continue misleading the public and ignoring the inarguable reality that masks have failed. Inevitably, it leads to policies like this; where rogue public health directors extend a mandate out of desperation and in order to maintain their relevance while protecting their extremely fragile egos.

On September 22nd, the Metropolitan Transportation Authority in New York City announced they would be heavily stepping up enforcement of masking in order to ensure universal compliance:

Customers Refusing to Wear Masks Are Subject to Receive a Summons

25,000 Free Masks Handed Out During Phase One of “Mask Blitz” During Last Two Weeks

The goal of heightened enforcement is to increase mask usage across all agencies, and to return to 2020 and early 2021 compliance levels where nearly 100% of riders wore masks onboard subways, buses, commuter railroads and paratransit vehicles. Since the $50 fine was implemented on September 14, 2020, MTA police officers have had over 88,000 positive encounters with customers. This has included the distribution of more than 50,000 free masks overall, 25,000 in the two weeks since the blitz began on September 7.

“Promoting mask usage is an important component to protecting one another,” said Patrick Warren, MTA Chief Safety Officer. “To support the use of masks we have provided tens of millions of free masks to customers, complemented by a robust communication endeavor. These efforts have seen mask usage recently rise on buses and trains. This next phase of our blitz will reinforce that wearing a mask is not optional. Vaccinated or not, you must wear a mask when traveling on public transit.”

So it’s understandable that Los Angeles would deem it necessary to continue the transportation mandate, to ensure success like this.

How do you engage with people so profoundly ignorant and habitually incompetent? This data is readily accessible, anyone should be able to see that the high mask compliance in Los Angeles was useless. Everyone should also see that masks on public transit, along with the general mask mandates and vaccine passports of course, were unsuccessful at stopping record breaking surges.

There is no easy answer, unfortunately.

Not to be outdone in the annals of covid policy hilarity is Philadelphia.

Less than two weeks ago, Philly announced they would be bringing back a mask mandate in response to a rise in cases.

Set to take effect on April 18th, the mandate was supposed to prevent another surge of infections in the city:

When the city announced April 11 that the mandate was coming back, the health commissioner, Dr. Cheryl Bettigole, said it was necessary to forestall a potential new wave driven by an omicron subvariant. She said Philadelphia had crossed the threshold of rising cases at which the city’s guidelines call for people to wear masks indoors.

“If we fail to act now, knowing that every previous wave of infections has been followed by a wave of hospitalizations, and then a wave of deaths, it will be too late for many of our residents,” Bettigole said at the time.

A quick glance at a chart of cases in the city after the initial mandate came into effect in June 2020 shows you why city health authorities and the mayor thought that masks would prevent the surge from taking hold:

With inarguable success like that, how can you blame them?

Their decision is even more absurd when we look at the “increase” in cases that caused them to believe a useless policy was necessary:

Not only did the end of the mandate not lead to an increase weeks afterwards, but even with the slight increase, case rates are still significantly lower than in April 2021 with the mask mandate in place.

Hilariously, the mayor announced that the policy would be ending after only four days in effect:

In a masterclass of misinformation, the mayor of Philadelphia specifically stated that wearing masks would “tamp down the case counts”

“Our belief is that wearing masks again will tamp down the case counts and hospitalizations, and allow us to continue to reopen and to get back to more normalcy,” Kenney said Thursday.

And his health officials had the audacity to credit their “response” with cases dropping, despite the fact that cases had already peaked by the time the mask mandate came into effect and at the exact same time they peaked in 2021.

That desperate attempt to convince the public that masks work is even more absurd when looking at data from neighboring counties. COVIDcast provides a comparison between Philadelphia and their closest neighbors and without labels it’s impossible to tell them apart:

Predictably, the undeniable futility of a mask policy having a positive impact in four days does not enter in the discussion or in the media coverage, which is especially offensive when considering trends are exactly the same in neighboring counties without masks.

Naturally, the mayor and health director also specifically stated that they would not rule out further mask mandates if conditions change.

These two cities are tremendous contributors to some of the worst, least impactful policies in world history.

Their commitment to gaslighting their citizens, openly lying to justify their political desires, and maintaining the delusional narrative that masks are necessary or valuable would be admirable if it wasn’t so immeasurably destructive.

Masks are useless, mask mandates are even more useless, yet cities like LA and Philadelphia are clearly going to forcibly mask their residents on a rolling basis indefinitely.

“CDC guidance,” the politicization of mask wearing, where many on the political left have made masks an visible form of their allegiance to progressive causes, and the desperately incompetent and malicious health “experts” who brazenly lie about the effect of masks are combining to ensure masking is semi-permanent in the anti-science jurisdictions.

No matter how much evidence accumulates against their usage and how ludicrously absurd their statements and justifications are, these two cities represent the future of masking; a clearly useless intervention, designed by incompetent and panicked “experts.”