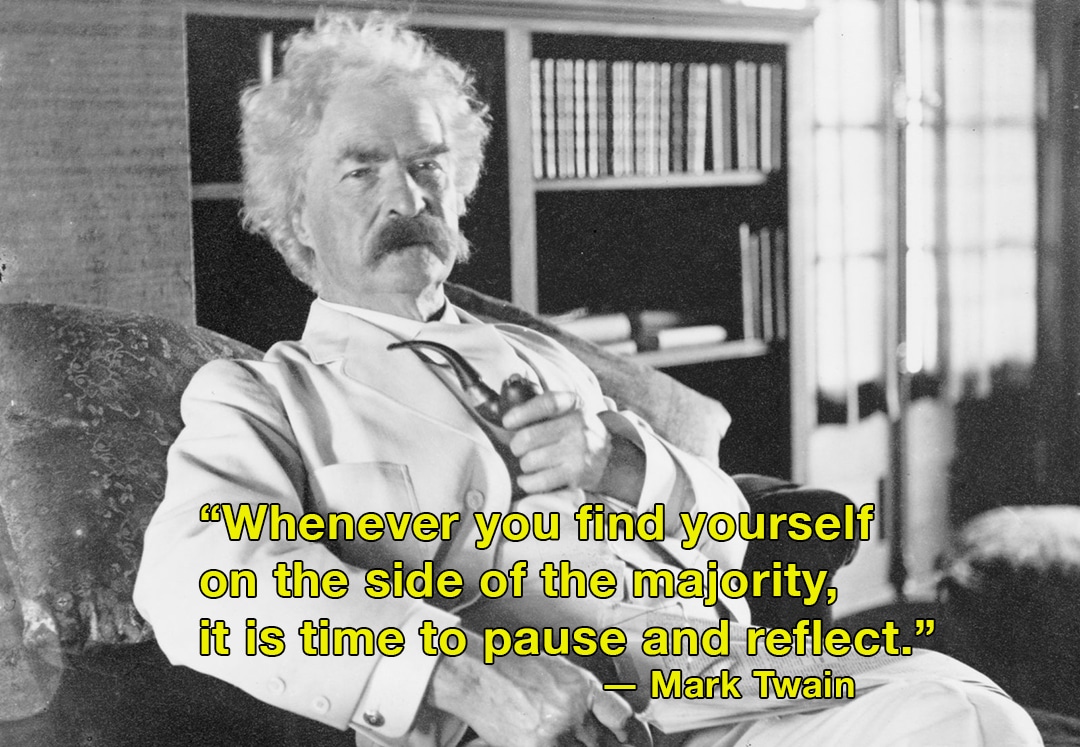 From The Adventures of Huckleberry Finn, Chapter 23, “The Orneriness of Kings”

Well, all day him and the king was hard at it, rigging up a stage and a curtain and a row of candles for footlights; and that night the house was jam full of men in no time. When the place couldn’t hold no more, the duke he quit tending door and went around the back way and come onto the stage and stood up before the curtain and made a little speech, and praised up this tragedy, and said it was the most thrillingest one that ever was; and so he went on a-bragging about the tragedy, and about Edmund Kean the Elder, which was to play the main principal part in it; and at last when he’d got everybody’s expectations up high enough, he rolled up the curtain, and the next minute the king come a-prancing out on all fours, naked; and he was painted all over, ring-streaked-and-striped, all sorts of colors, as splendid as a rainbow. And—but never mind the rest of his outfit; it was just wild, but it was awful funny. The people most killed themselves laughing; and when the king got done capering and capered off behind the scenes, they roared and clapped and stormed and haw-hawed till he come back and done it over again, and after that they made him do it another time. Well, it would make a cow laugh to see the shines that old idiot cut.

Then the duke he lets the curtain down, and bows to the people, and says the great tragedy will be performed only two nights more, on accounts of pressing London engagements, where the seats is all sold already for it in Drury Lane; and then he makes them another bow, and says if he has succeeded in pleasing them and instructing them, he will be deeply obleeged if they will mention it to their friends and get them to come and see it.

The duke says yes. Then there was a fine time. Everybody sings out, “Sold!” and rose up mad, and was a-going for that stage and them tragedians. But a big, fine-looking man jumps up on a bench and shouts:

“Hold on! Just a word, gentlemen.” They stopped to listen. “We are sold—mighty badly sold. But we don’t want to be the laughing-stock of this whole town, I reckon, and never hear the last of this thing as long as we live. No. What we want is to go out of here quiet, and talk this show up, and sell the rest of the town! Then we’ll all be in the same boat. Ain’t that sensible?” (“You bet it is!—the jedge is right!” everybody sings out.) “All right, then—not a word about any sell. Go along home, and advise everybody to come and see the tragedy.”

Next day you couldn’t hear nothing around that town but how splendid that show was. House was jammed again that night, and we sold this crowd the same way. When me and the king and the duke got home to the raft we all had a supper; and by and by, about midnight, they made Jim and me back her out and float her down the middle of the river, and fetch her in and hide her about two mile below town.

The third night the house was crammed again—and they warn’t new-comers this time, but people that was at the show the other two nights. I stood by the duke at the door, and I see that every man that went in had his pockets bulging, or something muffled up under his coat—and I see it warn’t no perfumery, neither, not by a long sight. I smelt sickly eggs by the barrel, and rotten cabbages, and such things; and if I know the signs of a dead cat being around, and I bet I do, there was sixty-four of them went in. I shoved in there for a minute, but it was too various for me; I couldn’t stand it. Well, when the place couldn’t hold no more people the duke he give a fellow a quarter and told him to tend door for him a minute, and then he started around for the stage door, I after him; but the minute we turned the corner and was in the dark he says:

“Walk fast now till you get away from the houses, and then shin for the raft like the dickens was after you!”

I done it, and he done the same. We struck the raft at the same time, and in less than two seconds we was gliding down-stream, all dark and still, and edging towards the middle of the river, nobody saying a word. I reckoned the poor king was in for a gaudy time of it with the audience, but nothing of the sort; pretty soon he crawls out from under the wigwam, and says:

“Well, how’d the old thing pan out this time, duke?”

He hadn’t been up-town at all. We never showed a light till we was about ten mile below the village. Then we lit up and had a supper, and the king and the duke fairly laughed their bones loose over the way they’d served them people. The duke says:

“Greenhorns, flatheads! I knew the first house would keep mum and let the rest of the town get roped in; and I knew they’d lay for us the third night, and consider it was their turn now. Well, it is their turn, and I’d give something to know how much they’d take for it. I would just like to know how they’re putting in their opportunity. They can turn it into a picnic if they want to—they brought plenty provisions.”

Them rapscallions took in four hundred and sixty-five dollars in that three nights. I never see money hauled in by the wagon-load like that before.

By and by, when they was asleep and snoring, Jim says:

“Well, it don’t, because it’s in the breed. I reckon they’re all alike.”

“Well, that’s what I’m a-saying; all kings is mostly rapscallions, as fur as I can make out.”