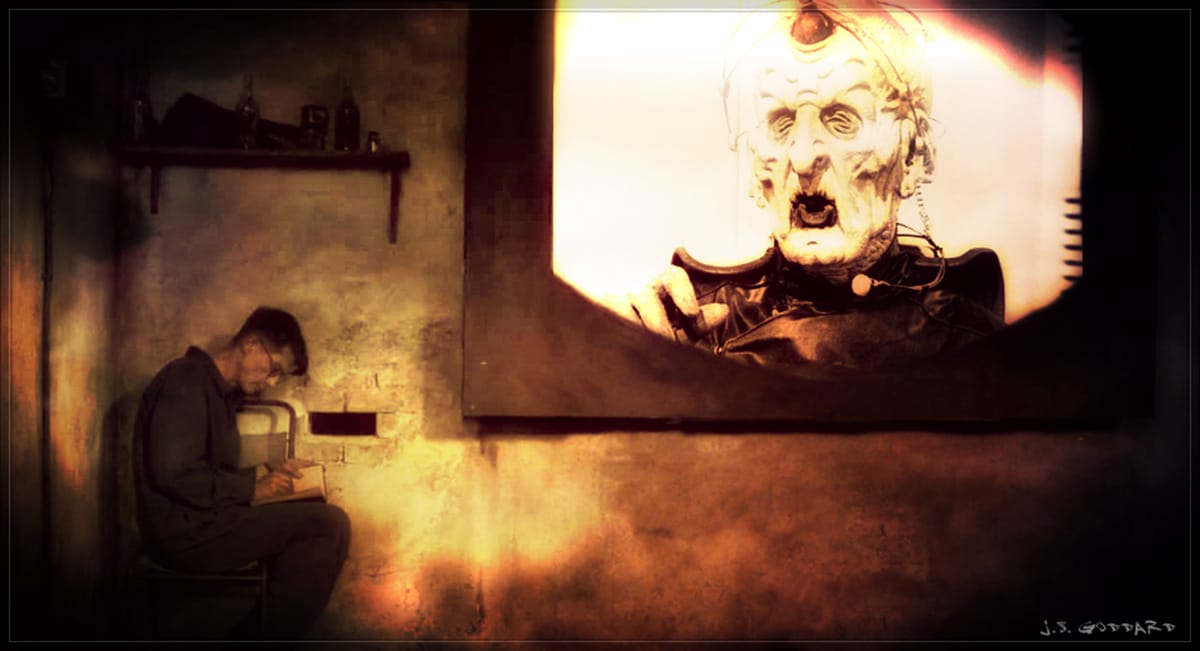 Prisoner of War: 1984 by Wheezing Grampus

The Voice of the System

Just before Christmas I travelled 100 miles or so from my home to Aix-en-Provence for a significant political event.

This was the launch of a special edition of the review Ecologie & Politique, entitled ‘Les enfants de la machine’, Children of the machine (see the latest Acorn bulletin on the Winter Oak site).

This focuses on the threat posed to humankind today by biotechnology, eugenics and transhumanism, with a particular focus on artificial reproduction.

I found the talks, and indeed the articles on which they were based, extremely pertinent.

They amount to a multi-faceted condemnation of what the authors variously describe as “biocapitalism”, “the technocratic order”, and the “abandonment of the body”.

Like Jennifer Bilek in the USA, they also see a link between Big Bio’s transhumanist agenda and the “transgender” phenomenon.

This, of course, is currently one of the system’s holiest of holy cows and Garcia asks how it can be that the issue has taken on such visibility, and thus such apparent importance, in contemporary society.

He writes of the media messaging, the propaganda coming from international partnerships, the psychological state of activists, industrial interests and a cultural mutation and says he finds it “impossible for the moment to establish an order of priority”.

I would venture that the industrial and financial interests clearly lie behind all the media and institutional propaganda which has artificially manufactured a cultural mutation and fanatical authoritarian mindset.

Garcia tells the story of the late academic and psychiatrist Colette Chiland who worked with “transgender” individuals and wrote about the “illusion” rather than the reality of changing sex.

As a result she was “the victim of an intimidation operation that started at 7 o’clock each morning” and  she was dragged through the mud by national left-liberal newspaper Libération.

Garcia remarks that to call somebody a “transphobe” is essentially to scream “shut up!” and wonders where “the real fascists of our times” are to be found.

Having personally witnessed both Garcia and Escudero being (separately) hate-mobbed for daring to challenge techno-capitalist orthodoxy in a left libertarian venue, I was half expecting to encounter a picket outside the event in Aix.

But it turned out that the inevitable attack had already taken place the day before, via an allegedly “environmentalist” website.

Four members of Ecologie & Politique’s editorial committee were given a slot on the Terrestres site to condemn the excellent special issue of their own publication.

As I read their nasty smear piece, I was overcome by a strange feeling of recognition.

I knew this tone, this technique – I was listening to the familiar Voice of the System.

This voice never argues with those who challenge its so-called truths, nor does it present its objection in terms of a disagreement.

Instead, it invariably condemns the objects of its hatred as morally bad and connected to everything else that it has already declared to be beyond the political pale.

So it is that these thought-police authors slap the label “reactionary” on the rebel writers.

They don’t at all appreciate the contributions of Guerini and Luzi, but particularly single out Garcia, saying that his article comes at the same time as “the rise of the extreme right” across Europe – thus insidiously trying to imply that he is part of this rise!

They go on to talk about attacks and even murders of minorities, as if to suggest that this is somehow the fault of people who dare challenge the system’s woke propaganda and its role in promoting the transhumanist agenda.

And the inquisitors don’t stop there, dropping in references to “nostalgists for fascism” taking power in Italy and 89 “extreme right MPs” winning places in the French Parliament, all for the purpose of saying that Garcia and the other dissident voices have a moral duty to shut up and toe the authorised “left-wing” line.

“The alliance between feminist movements, LGBTQI movements and environmental movements can only be made by getting rid of a retrograde vision of nature, including human nature”, they declare.

There’s the vitaphobic ideological agenda laid bare in one sentence!

Because the dissident position does not correspond to their official Central Committee version of left-wing thought, the authors invoke the oft-cited threat of “convergences” and “confusion” between “left” and “right” critics of the system they defend, giving two gratuitous namechecks to French New Right thinker Alain De Benoist without feeling the need to demonstrate the slightest relevance to the question in hand.

By littering their article with names and labels that frighten their target readership, without any factual justification, the witch-finders seek to discredit and marginalise their opponents by foul means.

They even condemn the cover of the journal, a drawing of a mother and child, as reflecting “an iconography instrumentalised by conservative currents” and find their opponents guilty of the serious thoughtcrimes of “giving credit to conservative arguments surrounding gender and promoting a fatalistic vision of technical and scientific evolution”.

On a lighter note, their repeated use (five times!) of the term “problématique”, to describe views with which they do not agree, made me laugh out loud, reminding me of Francis Aaron’s excellent music video ‘Problematic‘.

Having marvelled at the utter dishonesty of this attack on dissident views, I thought I would have a quick look at the identities of the four smear-mongering authors.

The first, Renaud Bécot, is an “expert” from the Fondation Jean Jaurès, a “progressive think tank” funded by the French state and considered to be close to the Macron regime.

The second, Fabrice Flipo, is a senior researcher at Telecom EM, which “trains innovative managers and entrepreneurs who are open to the world and who will guide organizations through the digital, energy and ecological, economic and industrial transitions that will be at the heart of tomorrow’s society” and is the business school of the Institut Mines-Telecom, a public-private body which boasts a “dual governance structure” in which the French State’s supervision is “complemented by the participation of large companies”.

The third author, Laurent Garrouste, is a state-employed inspector who is also a member of the Fondation Copernic, a purportedly radical organisation that regards Covid “vaccines” as a “great success” and demanded that they be rolled out universally.

And the fourth voice of the system is Benoît Monange, director of the Fondation de l’écologie politique, French partner of the Green European Foundation, which is funded by the European Parliament and is very interested in smart cities.