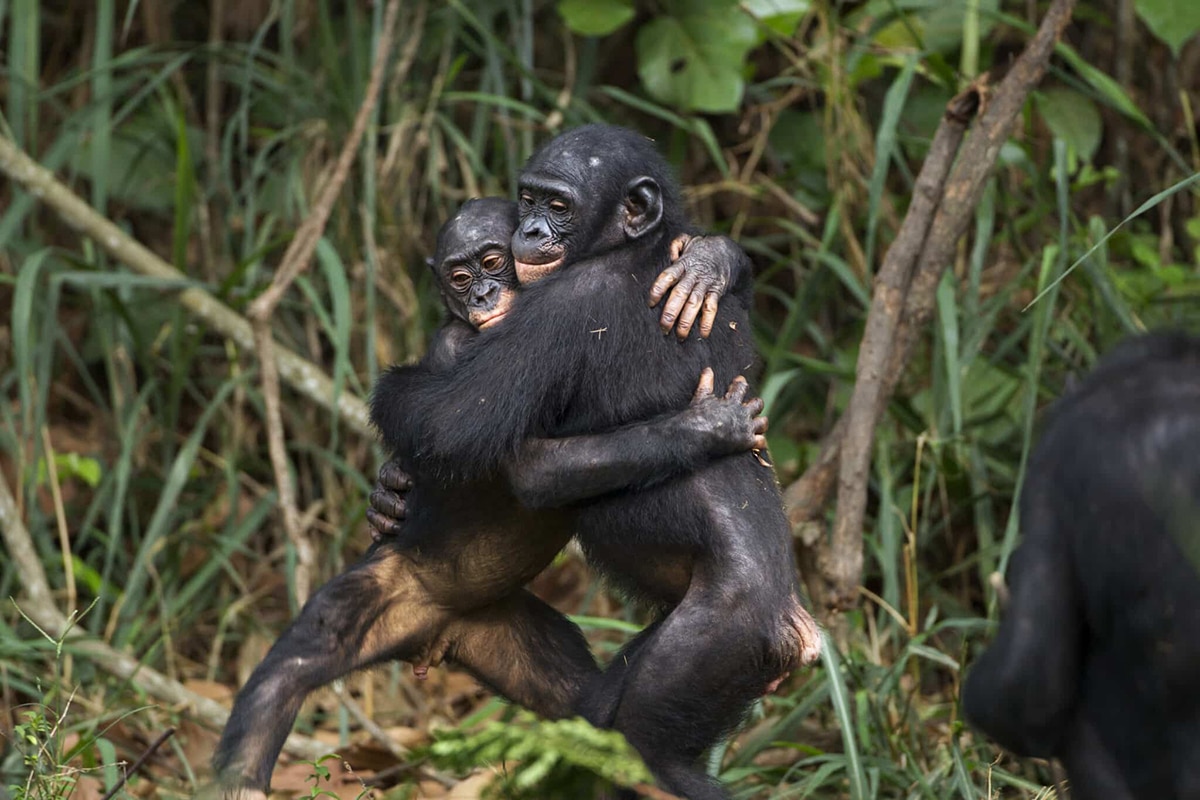 Could Tolerant and Peaceful Bonobos Be the Model for Human Peacemaking?

Humans share 98.7 percent of their DNA with two species of endangered great apes: bonobos (Pan paniscus) and chimpanzees (Pan troglodytes). Bonobos — which can only be found in forested regions of the Democratic Republic of Congo (DRC), south of the Congo River — differ from chimpanzees in appearance and behavior. They are usually smaller, and their societal groups are led by females and are generally more peaceful.

It is the bonobos’ peaceful nature and how it relates to the rare ability of humans to show tolerance and cooperate with one another that is the subject of a new study by Harvard primatologists. Bonobos have been dubbed “hippie apes” by researchers due to their harmonious disposition and active sex lives, the Harvard Gazette reported.

Not as much is known about the social relationships of bonobos in comparison with those of chimpanzees due to the remoteness of the bonobos’ habitat, their uneven distribution and prolonged civil unrest in the DRC, according to the World Wildlife Fund.

However, the new Harvard study hopes to flesh out some of the details of bonobos’ social structure.

The study, “Characterization of Pan social systems reveals in-group/out-group distinction and out-group tolerance in bonobos,” was published in the journal Proceedings of the National Academy of Sciences.

“Another difference between the two species is in the dominance structures – with chimpanzees males dominating all females and bonobo females usually dominating males. One of the ideas is that female dominance in bonobos affords them greater social leverage and that by forming female-female alliances they are able to suppress male aggression,” Samuni said.

Samuni went on to say that the territories of chimpanzee groups don’t often overlap, but, as is the case with other animals, they compete for land, mates and resources.

“Larger groups are usually able to maintain larger territories and benefit from increased access to valuable resources. So winning conflict over neighbours can be highly beneficial for the group and even increase the reproductive output of its members,” Samuni told EcoWatch.

So why are bonobos so much more peaceful in their interactions than chimpanzees?

“Why bonobos have evolved to be this way is a question that is difficult to answer,” Samuni said. “The main theory is that bonobos evolved in a lusher/more stable environment where feeding competition was reduced, thereby allowing females to form closer relationships with one another which enable them to hold high social status within their group. However, there is conflicting evidence as to whether this holds true and more data and studies are needed before we can answer this question.”

From 2017 to 2019, the scientists studied 59 bonobos in four neighboring groups living at the DRC’s Kokolopori Bonobo Reserve and found that, while the individual groups maintained spatial and social borders that indicated their independence from each other, they shared regular peaceful interactions, reported the Harvard Gazette.

“It was a very necessary first step. Now that we know that despite the fact that they spend so much time together, [neighboring] bonobo populations still have these distinct groups, we can really examine the bonobo model as something that is potentially the building block or the state upon which us humans evolved our way of more complex, multilevel societies and cooperation that extends beyond borders,” said Samuni, as the Harvard Gazette reported.

Prior research had shown that the bonobo groups had regularly come together to socialize, share meals and groom each other, but the researchers hadn’t been sure how similar the bonobos’ behavior was to subgroups of chimpanzees — referred to by primatologists as “neighborhoods” — within a single bigger community.

“There aren’t really behavioral indications that allow us to distinguish this is group A, this is group B when they meet,” said Samuni, as reported by the Harvard Gazette. “They behave the same way they behave with their own group members. People are basically asking us, how do we know these are two different groups? Maybe instead of those being two different groups, these groups are just one very large group made up of individuals that just don’t spend all their time together [as we see with chimpanzee neighborhoods].”