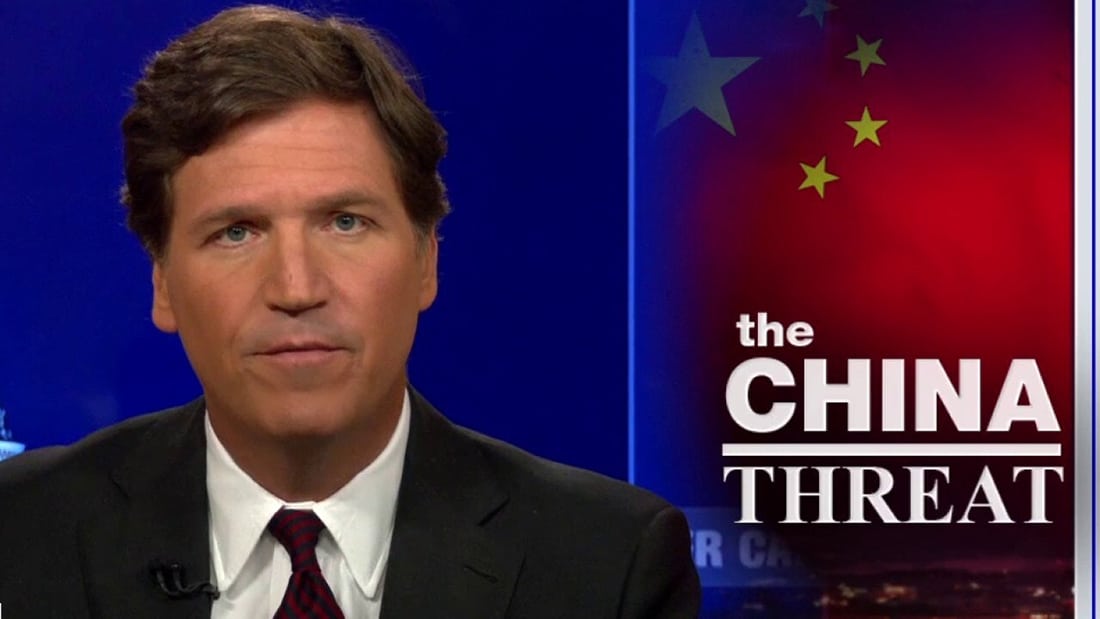 Fox News’s fabulously popular right wing pundit Tucker Carlson has ratcheted up his show’s anti-China propaganda yet again, introducing his interview with Brazil’s rightist president Jair Bolsonaro with a psychotic rant against Beijing that, were it about Moscow, would have looked perfectly at home among even the most demented mainstream liberal punditry at the height of Russiagate hysteria around 2018.

Before attempting to help Bolsonaro reverse his abysmal polling against his left-wing opponent Lula da Silva in a presidential election this coming October, Carlson led with the completely unevidenced claim that “China has been busy with its own agenda—taking over the world.”

All facts in evidence say that China is not working to “take over the world” (that’s what the US is doing), but is rather working to give rise to a multipolar world order that’s no longer dominated by a single unipolar hegemon. All the facts you ever see people citing to claim that China is attempting to supplant the US as unipolar hegemon are, when you drill down on them, in reality perfectly in alignment with Beijing’s stated agenda of multipolarism. China taking up more space on the world stage only looks like an egregious assault when viewed through the prism of a worldview which believes this planet is the property of the United States government.

Carlson’s claim that China has an agenda of “taking over the world” is also absurd on its face because it’s nonsensical to claim that Beijing has been watching the US empire crush itself under its own weight, burning itself out in a few short decades with its frenzied attempts to rule the globe, and thinking “Hey that looks awesome, let’s do that.”

Carlson also made the even more ridiculous claim that “the Chinese have succeeded in re-colonizing the entire continent of Africa.” Carlson does not bother explain how Africa was “re-colonized” in its entirety by China while the continent remains dominated militarily by United States Africa Command (AFRICOM) and economically by the World Bank, the IMF, and western plutocrats and corporations.

Clearly the Chinese government is not run by self-sacrificing martyrs who gain nothing from Chinese infrastructure projects in Africa, but it’s absurd to put this on anywhere near the same level as the US dominating the continent with dozens of military bases and amassing proxy forces and the crushing neo-colonialism of the World Bank and IMF. Anyone who’s done any intellectually honest research into Chinese infrastructure development in Africa knows that it is far more mutually beneficial and far more ethical than the western systems of oppression which have been exploiting that continent for centuries.

Carlson is lying. This claim of his, that The New York Times is “on China’s side,” reveals so much about the fraudulent nature of Carlson’s populism schtick. It takes nothing more than a quick search of the keyword “China” on NYT’s website to show that the outlet has been frenetically churning out articles that can only be described as aggressively critical of China, like this one, this one, this one and this one, just to choose a few examples from the last few days.

Tucker Carlson: "The New York Times is on China's side."

Do you see how this works? Carlson portrays himself as an anti-establishment hero who’s sharing knowledge with his viewers that they’ll never hear from the elitists at The New York Times or those fat cats in Washington, then goes on to tell them things that are perfectly in alignment with the agendas of those establishment institutions. Do you see how this tricks viewers into believing they’re getting the inside scoop on what the powerful are really up to behind closed doors, while actually manipulating them into alignment with the long-term goals of the powerful?

I have some overlap with Carlson’s audience because I criticize some of the same things he does like the US proxy war in Ukraine, so some of my readers get confused and upset when I say he’s just as much a propagandist as the empire spinmeisters on CNN and MSNBC. But if you actually look at what Carlson does from day to day you start to notice that he only criticizes some imperial actions which are opposed by right-wing populist strains in the US while continuously sheepdogging that audience into supporting establishment agendas like the cold war with China, legitimizing two-party electoral politics, and keeping everyone fixated on vapid culture war bullshit.

There is no more important goal for the oligarchic empire than securing US hegemony by halting the rise of China, and there is no figure more effective in manufacturing consent for that goal than Tucker Carlson. He gains credibility by appearing to fight the power, then uses that stolen credibility to help manufacture consent for the most high-priority agendas of the powerful.

And that’s just the sort of behavior you’d expect from someone whose life has been full of highly shady overlap with the Central Intelligence Agency and who has actually admitted to having applied to join the CIA.

[Thread] New from me. Did Tucker Carlson really fight for the Contras in Nicaragua in the 1980s? Newly uncovered recordings suggest that he might have.

Carlson introduced Bolsonaro as a leader who opposes “allowing Brazil to become a colony of China,” implanting the idea that this is a real thing in his gullible audience’s mind. China is taking over the world, and the powerful political and media elites want it to take over the world, so the best way to fight those elites is to support the fight against China. Never mind the fact that the fucking Pentagon says openly that China is America’s number one enemy, and that the entire political/media class is firmly in alignment with the agenda to stop it.

The propaganda campaign against China has been quietly heating up on the back burner while everyone focuses on Russia and Ukraine. Every so often I mention China on social media and the responses I get from those who listen to Tucker Carlson and his fellow “right populist” pundits are just appalling in their stupidity and their white hot emotionality.

I am really not looking forward to when the imperial crosshairs move to Beijing, partly for the self-evident reason that this will be extremely dangerous and economically disastrous, but also because getting swarmed by all these brainwashed dupes in my replies is going to be excruciating. They’ve already been made crazy, and they’re going to be driven a whole lot crazier as this propaganda campaign gains more and more momentum.

If you’ve fallen for this ruse, it’s not too late to step back and realize that you haven’t been receiving brave anti-establishment commentary from the single most prominent pundit in the Murdoch press. Anyone who tells you that the correct response to your instinct that things are messed up is to vote for one of America’s two mainstream parties, consume mainstream media, and hate your government’s enemies is very clearly working to deceive you.