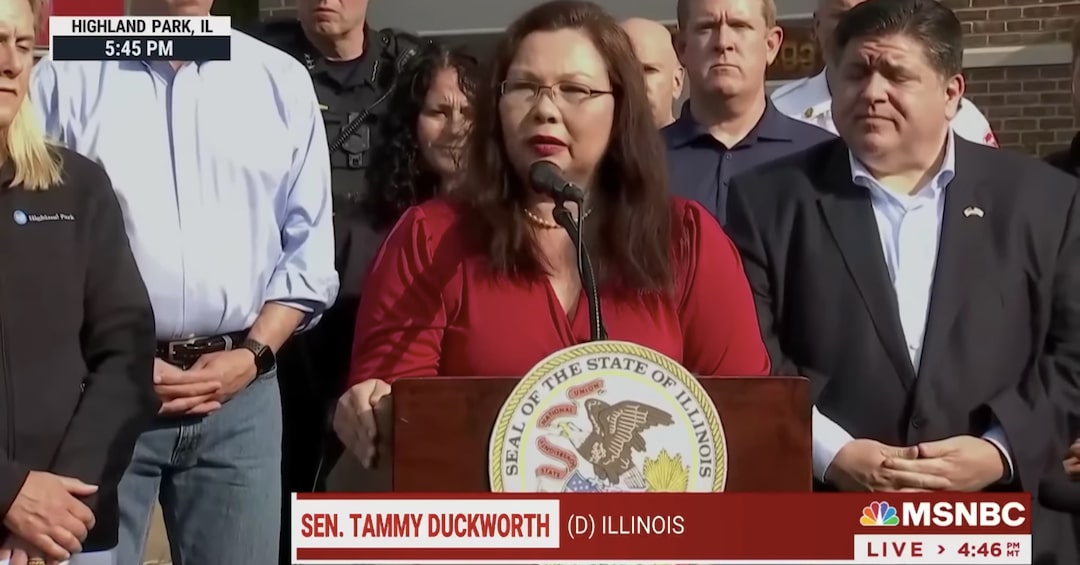 Every time there’s a mass shooting in America with an AR-15, high-level Democrats line up to proclaim that those weapons should only ever be used to kill impoverished foreigners.

The latest example of this ongoing phenomenon was Illinois Senator and Iraq war veteran Tammy Duckworth telling the press that a recording from the July 4th Highland Park shooting which killed seven people and wounded dozens more reminded her of her combat experience overseas, saying the US needs to do better within its own borders.

“I just listened to the sound of that gunfire from one of the videos that was captured,” Duckworth said. “And let me tell you that the last time I heard a weapon with that capacity firing that rapidly on a Fourth of July was Iraq, it was not the United States of America. We can and we should and we will do better.”

Rep. Tammy Duckworth after Highland Park shooting: "We must do more…the last time I heard a weapon with that capacity, firing that rapidly, on a 4th of July was Iraq." https://t.co/LCXT08OaLr pic.twitter.com/wYVhTT6CZB

This was not the first time Duckworth has repeated this demented Democratic Party refrain. Last month during the controversy which followed the school shooting in Uvalde, Texas, Duckworth tweeted, “I carried an M16 and M4 in the military, so let me be clear: High-powered rifles designed for our troops to engage an enemy with accurate, lethal fire at a velocity of 3,000 feet per second have no place on our streets. I fully support an assault weapons ban.”

Obviously American weapons of war kill far more people overseas than they do domestically, and those killings are done in wars of aggression for power and profit which are sold to the public with lies and propaganda, so they’ve got no higher moral standing than the killings of any mass shooter. But because the Democratic Party exists only to kill leftward movement in the United States and ensure the continual functioning of a globe-spanning empire, gun violence is seen at its highest echelons not as a moral issue which should be opposed everywhere but as a wedge issue which should be exploited for campaign donations.

We saw this illustrated in a notorious 2017 tweet from now-US Transportation Secretary Pete Buttigeig which said, “I did not carry an assault weapon around a foreign country so I could come home and see them used to massacre my countrymen.”

Another classic came from Instagram progressive Alexandria Ocasio-Cortez in 2019: “Weapons of war, specifically designed to kill human beings en masse, should not be available for purchase.”

Weapons of war, specifically designed to kill human beings en masse, should not be available for purchase.

We saw this “those bullets belong in foreign bodies” Democratic talking point seeded way back in 2013 by that masterful empire manager Barack Obama.

“These weapons of war, when combined with high-capacity magazines, have one purpose: to inflict maximum damage as quickly as possible,” reads an Obama White House statement. “They are designed for the battlefield, and they have no place on our streets, in our schools, or threatening our law enforcement officers.”

Some pundits take it a step further and call for the US to actually physically ship all the nation’s AR-15s overseas to be used in Washington’s proxy war in Ukraine:

Crazy thought, but those 20 million AR-15s now in this country could sure arm a lot of Ukrainians.

That’s the Democratic Party for you. Progressive in the streets, murderous imperialists in the sheets. That unique brand of psychopathy that can posture and preen as a compassionate voice of sanity before the voting public, turn around and help gun down everyone in the Global South for crude oil and Raytheon profit margins, and then go to bed and not lose a wink’s sleep over it.