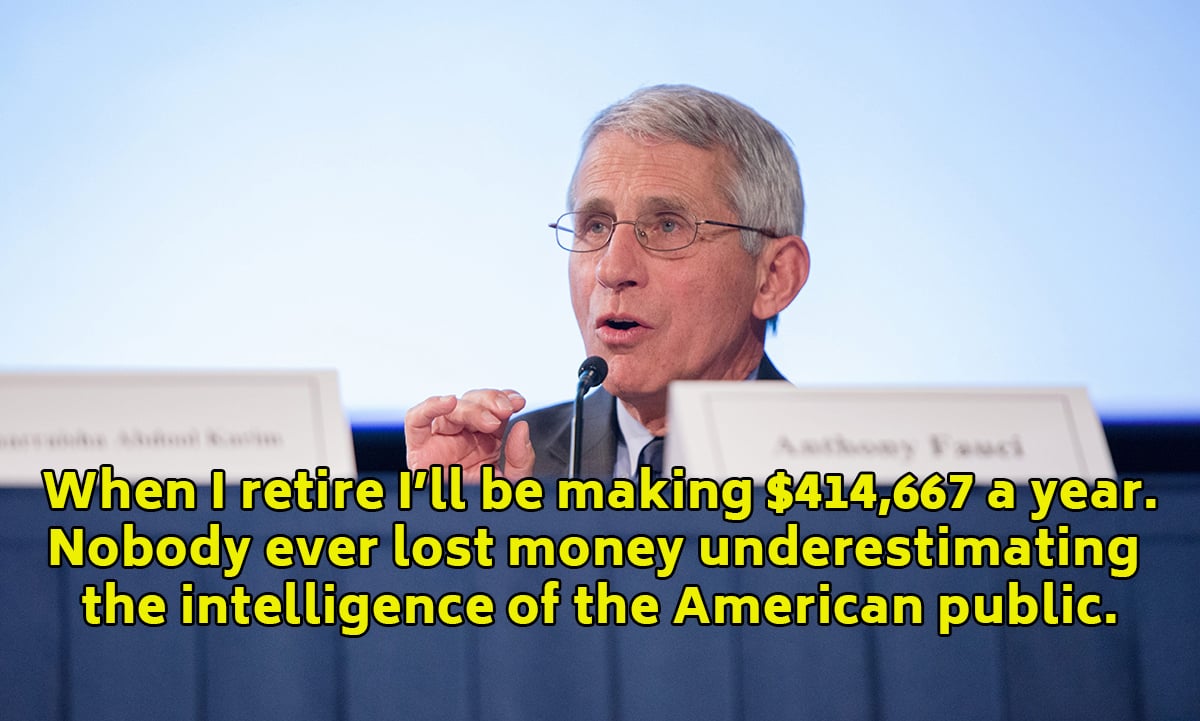 The documents contain a wealth of previously unknown information. For example, the Fauci household’s net worth now exceeds $12.6 million – up $5 million from 2019 through 2021.

It was Fauci’s “code red moment” when America’s ‘top doctor’ melted down on national television in the Senate hearing. (When Marshall cited ‘Forbes,’ that was our research on Fauci’s financials published in my then-column at Forbes.)

Today, we post more of the financial disclosures that Dr. Fauci didn’t want you to see. Here’s a summary of our findings from the latest document release:

· Top Paid: Fauci continued to be the most highly compensated federal employee earning $456,000 in 2021 and $480,000 in 2022. Fauci out-earned the president, four-star generals, and roughly 4.3 million other federal bureaucrats.

· Big Awards: In 2021, Fauci augmented his government income with nearly $1 million in prizes from non-profit organizations across the world. For example, the Dan David Foundation, based in Israel, awarded $901,400 for “speaking truth to power” and “defending science” during the Trump administration.

Here are the numbers as compiled by our auditors at OpenTheBooks.com, an organization I lead. This analysis uses information we previously unearthed plus the newly released disclosures.

The disclosures show that he’s invested in fairly broadly targeted mutual funds, with no reported holdings of individual stocks. The Fauci’s deposited an additional net $1,346,304 in savings during this period.

Fauci’s 2021 disclosures show that he continues with an ownership stake in a San Francisco restaurant, Jackson Fillmore, worth between $1,000 and $15,000: but received minimal income from the restaurant.

In January 2021, Fauci received a $1 million prize for the prestigious Dan David Prize affiliated with Tel Aviv University for “speaking truth to power” and “defending science” during the Trump administration. Disclosures show that Fauci kept $901,400 of that prize with roughly 10-percent awarded to handpicked scholarship winners.

Fauci also collected awards of $12,500 from the Eliot Richardson Prize in Public Service on July 31, 2021 and the Abelson Prize from the American Association for the Advancement of Science on February 8, 2021.

Two years ago, Fauci was named Federal Employee of the Year at the 2020 Samuel J. Heyman Service To America Medals awards program and he was paid $5,198 for the virtual star-studded event.

In 2022, Anthony Fauci received another base salary increase up to $480,000. While he out earns the president, Mrs. Fauci out earns the vice-president.

Fauci’s ‘code red moment’ — U.S. Senator Marshall cited our research published at Forbes that Fauci was the top-paid federal employee and yet his financial disclosures weren’t available to the public. January 2022

A good faith estimate of the taxpayer cost of those benefits is 30-percent multiplied by the salary amount for Dr. Fauci and his wife.

Golden Parachute: Last month, Fauci announced his retirement and we estimated he’ll reap a $375,000 first-year pension— the highest in federal history. He’ll receive well over $1 million during his first three years of retirement.

This analysis assumes that Fauci will keep his promise to retire in December 2022. Last July, the doctor then said he would retire by January 2025. If he did, we estimated his retirement pension ($414,667) would exceed the president’s salary ($400,000).

Disclosures show that Dr. Fauci edits the medical textbook, Harrison’s Principles of Internal Medicine and serves on the board of the publisher, McGraw Hill. In 2021, Fauci received $100,000 as an editor of the publication.

Earlier this year, an NIH spokesperson confirmed that Dr. Fauci has an editorial board position with McGraw Hill that is approved by NIH.

Background: OpenTheBooks filed a Freedom of Information Act lawsuit to get a copy of all royalties paid to current and retired NIH scientists since 2005. When NIH ignored our lawful request, we sued in federal court (October 2021). Judicial Watch, a public interest law firm, represented us.  NIH is producing 3,000 pages of line-by-line royalty payments; however, the amount paid to each of the 2,250 individual scientists continues to be redacted.

Fauci – and other NIH leaders – received third-party paid royalties; however, the amounts are blanked out, redacted, so the dollars received are unknown.

How Fact-Finding Fauci Led To My Cancellation At Forbes | March 9, 2022 | OpenTheBooks.Substack.com

Our organization accepts no taxpayer funding and was founded by CEO Adam Andrzejewski. Our federal oversight work was cited twice in the President’s Budget To Congress FY2021. Andrzejewski’s presentation, The Depth of the Swamp, at the Hillsdale College National Leadership Seminar 2020 in Naples, Florida posted on YouTube received 3.7+ million views.