Joe Biden: The Maestro of Messes

How fitting that Joe Biden’s first year in the White House ends with his long-touted Summit for Democracy, a two-day affair that ended last Friday. I can’t decide whether the occasion was more farce than embarrassment or if it was the other way around.

Either way, it stands as just the right signature for an administration that, not quite 12 months in, proves farcical and embarrassing all at once.

I predicted last spring, when the White House announced its intention to organize this caper, that it wouldn’t have the nerve to go through with it. Julian Assange was in prison for the crime of journalism, coup operations were active in several socialist democracies in Latin America, there were human rights abuses galore and American democracy was nothing more than a hollow conceit for all the world to see: The hypocrisy seemed too much even for a man who has made a political career out of lies, gross corruption, and misrepresentations of true intent.

I was wrong. I overestimated the raw political intelligence of the otherwise stupid people running the United States as our 46th president wanders the White House corridors and dozes his way, Reagan-style, through his days.

It was a virtual affair, 111 heads of state sitting before screens in 111 capital cities around the world ostensibly to raise high the banner of democratic “values” and practice and fight the good fight against the great authoritarian Other. Straight out of the box, a problem: The U.S. supports more authoritarian regimes than you’ve had hot dinners. It has done so for many decades, and the Biden administration has changed this not one jot. Atop this there is the liberal authoritarianism that besets us at home.

Dividing the World into Blocs

In truth, the Summit for Democracy had very little to do with democracy by any sophisticated definition and much to do with dividing the world into we-and-they blocs of the kind Washington thrived on for the Cold War’s four decades. The president who purports to stand for unity at home cultivates disunity abroad at every turn. An excellent way at the 21st century, Mr. President.

The sad conclusion is that “democracy,” like “human rights,” is now reduced to a shoulder patch to be worn by those still willing to pledge allegiance to “the rules-based international order,” Washington’s latest euphemism for American hegemony. The events of last Thursday and Friday were about geopolitical alliances and an idea of democracy that has less to do with Demos, a self-governing citizenry, than with political economies defined by neoliberal orthodoxies in one or another of its forms.

The list of participants reflected this. There was Ukraine, a corrupt oligarchy supported by openly declared neo–Nazis; apartheid Israel, which can be considered a democracy only if one is racist, and Colombia, ruled by an anti-democratic regime of U.S.–backed neoliberals given to violent repression and political assassinations. The inclusion of Taiwan, which, despite its accomplishments, is not a nation-state, was sheer provocation in the service of Washington’s determination to cultivate maximum tension with China. 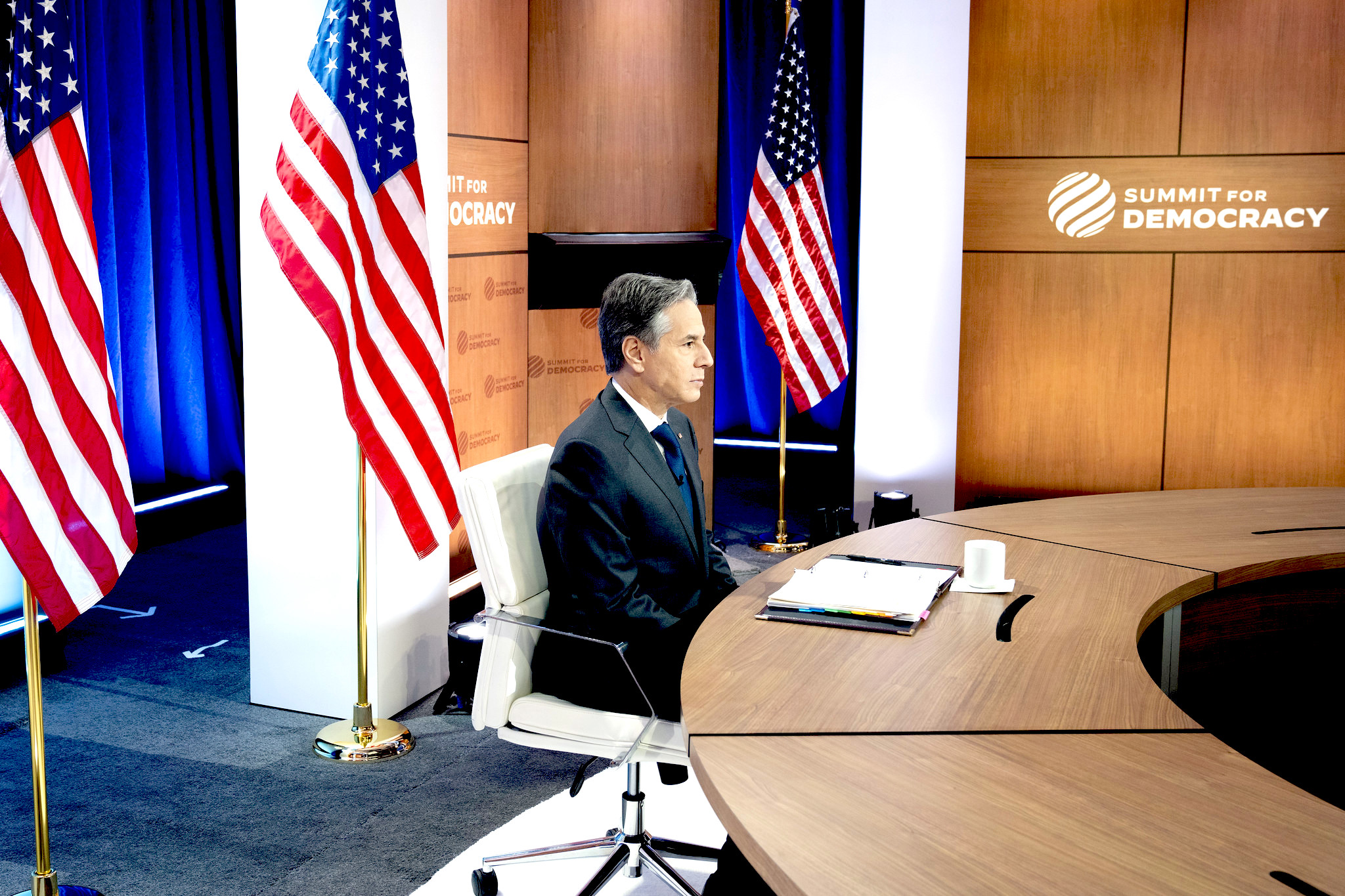 Among the excluded were Iran, which is fairly understood as a functioning democracy with a flawed constitution, and Nicaragua, which just held national elections with a 65 percent participation rate.

This is what I mean by farce. On to the embarrassments. These are multiple, but let us focus on two.

In my read, the Summit for Democracy put on full display precisely what it was intended to submerge. This is the first of its embarrassments. Democracy as the West has defined it is broken. Those who have historically stood as its trustees broke it.

The industrialized nations of the West have entertained two versions of democratic government since the politically eventful 18th century. There is popular democracy and its variant, elite democracy.

In the U.S. this was roughly speaking the Hamilton–Jefferson divide. Closer to our time, this defined the tension between Bernie Sanders and the mainstream of the Democratic Party. In Britain, it is the difference between Jeremy Corbyn and Keir Starmer, who has restored the Labour Party’s elite leadership as first consolidated by Tony Blair in the 1990s and 2000s.

With no exception I can think of, the Atlantic world is now governed by elite democrats favoring a highly corporatized version of neoliberalism. And they have more or less systematically destroyed democracy in the Western mode as they defend their power, privilege and corporate funding against popular democratic insurgencies. This is done in the name of democracy, of course, just as the Summit for Democracy was at bottom an anti-democratic exercise.

I have called those actually running the Biden administration, in addition to the president, stupid. This is not a matter of mere name-calling. It is because they entirely miss one of the core realities of the 21st century.

Parity between the West and non–West, as argued severally in this space, now emerges as an inevitable feature of our time, whether one approves of it (as I do, emphatically) or not. This means something very important in the matter of political processes and political legitimacy.

It means democracy can no longer be defined according to narrow Western standards — nor should it ever have been. It means democracy will assume many different forms because it has to be understood as arising from very different histories, cultures and political traditions. It means democracy in one nation is bound not to look very much like democracy in another. And it means the long, long assumption that non–Western nations must model their democratic practices on the West’s is a thing of the past.

Biden and his minders, as they bandy about their classifications of nations as “democratic” and “authoritarian” in the old Freedom House mold, entirely miss this turn in history’s wheel. The Summit for Democracy, read in this way, was an extravagant exercise in denial. And this is what I mean by stupid.

Is Cuba a democratic nation? Is Venezuela? Is Nicaragua? Is Iraq? No answers in these and numerous other cases are worth considering if they do not take into account the complexities attaching to the question itself. Biden and his foreign policy people obstinately deny these complexities. Again, stupid.

The big one for the Biden administration is this: It is now perfectly legitimate to ask whether the U.S. is any longer a democracy — an unheard-of question a few decades ago. Maybe at some subliminal level Biden and his minders organized the Summit for Democracy precisely to dodge this problem. 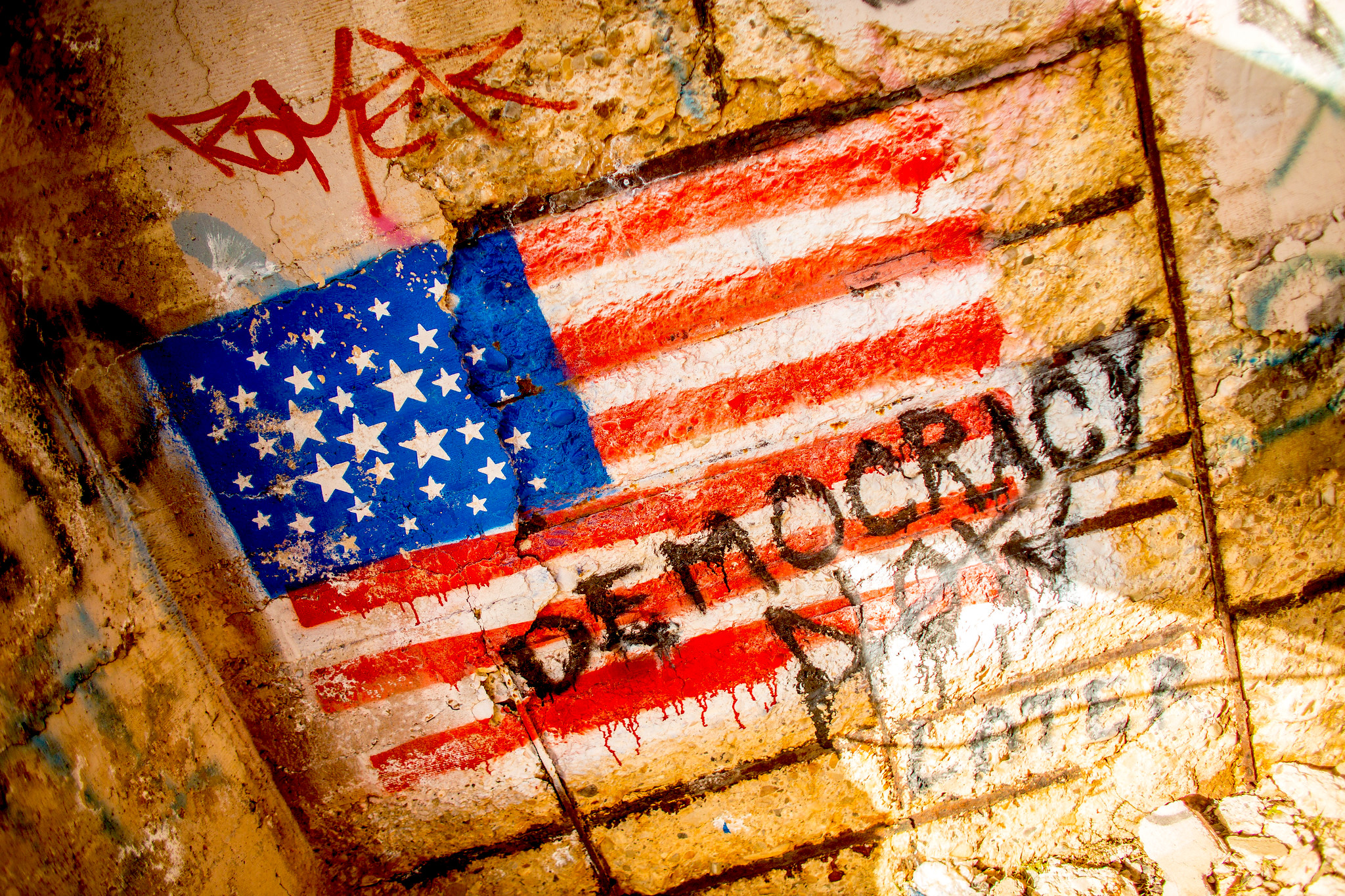 And who can blame them, considering the only logical answer.

What happened and what didn’t last Thursday and Friday is an excellent punctuation mark at the end of Biden’s first year because it is so emblematic of this president’s most fundamental characteristic: We now have to count Biden an ineffectual bumbler in the same file as, say, Herbert Hoover, Calvin Coolidge, or (regrettably, given his better qualities) Jimmy Carter.

It is Biden’s ill fortune to assume the presidency at precisely the point of inflection when the American empire enters a phase of steep, irreversible decline. Joe “America is back” Biden had two alternatives as he took office. He could pretend history had not merely stopped — it would reverse, and it was his job to restore the empire to the tarnished glory of the post–1945 decades. Or he could, as Jack Kennedy intended before the Deep State murdered him, get America out of the business of empire and advance it according to a new, more humane ethos.

The man from Scranton has chosen wrongly out of a deficit of courage. And now he emerges as the maestro of many messes.

Relations with China, relations with Russia, the Iran accord, Syria, the various covert ops south of the border: A year’s worth of foreign policy draws to a close in a directionless shambles. After all the talk of diplomacy first, the generals and the national security apparatus have never been more safely in charge. The Oval Office remains a prime source of the abominable violence we live amid.

On the domestic side, Biden has done nothing to draw the nation together to fight a common threat — no inspiring leadership, FDR–style, no focus. A second year with the Covid–19 virus finds us in the depths of cynicism: Corporations indulge in price-gouging on a grand scale, Big Pharma — Pfizer now urges a fourth injection, a second booster — reaping obscene profits while suffering and inequality rise right along with inflation.

In my read Biden is simply the wrong man for the job, setting aside his obvious mental decline. This is a pol who spent half a century wheeling and dealing on Capitol Hill, where any kind of larger vision counts for little next to one’s ability to keep the logs rolling and the barrels filled with pork. An ability to mislead the public goes far toward success.

As long as Biden served among fellow dumbheads with the same lowly priorities, the one-eyed jack could pass as king — Biden was the seasoned foreign policy expert, the statesman. Forget it. The pose doesn’t work now that he has to understand the world and act sensibly in it instead of merely pretending to understand it and acting in it without great consequence. Unlike on Capitol Hill, there are serious, paying-attention people in Berlin, Beijing, Moscow, Paris, and elsewhere.

Biden apparently dreamed of the presidency for decades. And now we must reflect on how perilous it often turns out to be when one’s dreams come true. Farce and embarrassment seem to be our fate for the next three years.

Patrick Lawrence, a correspondent abroad for many years, chiefly for the International Herald Tribune, is a columnist, essayist, author and lecturer. His most recent book is Time No Longer: Americans After the American Century. Follow him on Twitter @thefloutist. His web site is Patrick Lawrence. Support his work via his Patreon site.