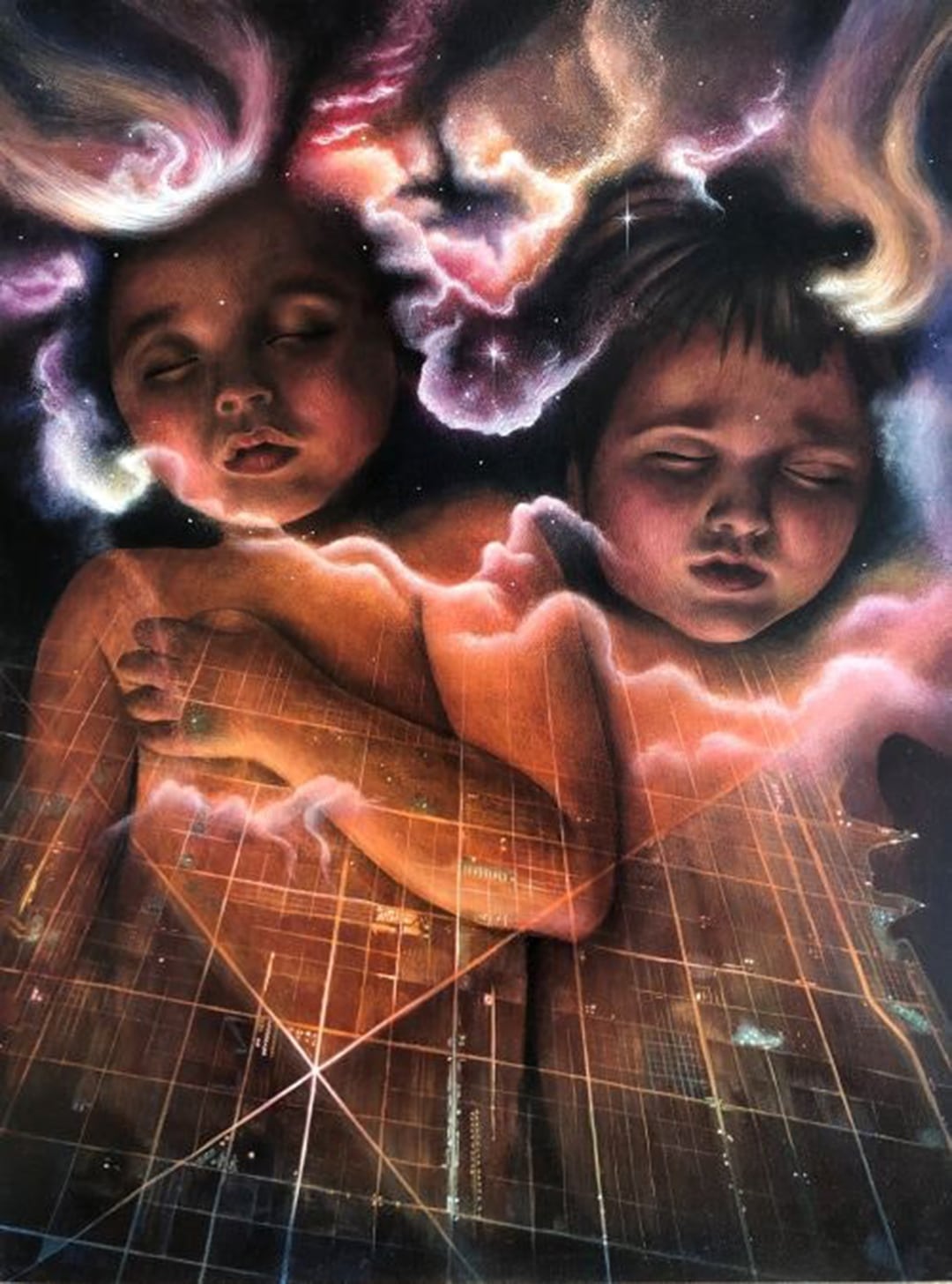 Painting “We Are Made of Stardust,” by Natasza Zurek

Love-Gift to the Future

A couple years ago after a speech about ecological healing a man came up to me to ask a question. With a warm, friendly smile he drew me close and put a hand on my shoulder. “You mentioned in your speech that you have four children. What makes you think you have the right to bring four humans onto the planet to consume resources for the next 90 years, you arrogant, entitled, white male asshole? How do you justify that?”

I took a deep breath. “Look, the Q&A session starts in ten minutes. Ask me again then.”

Ten minutes later he took the mic and repeated his question (substituting “hypocrite” for“asshole”). Then he added, “You owe an apology to everyone who has struggled with the decision not to have children and sacrificed parenthood for the good of the planet.”

I responded with something like this: “If I tried, I could probably concoct some kind of justification for my choice to have children. Maybe I could say that the good they will do in the world outweighs the damage from the resources they’ll consume. Maybe I could make a case for an upcoming population crash. But if I said that’s why I decided to have children, I’d be lying to you. It wasn’t some carefully calculated ethical decision. I had children because I wanted to. And when I think of those precious beings, I cannot imagine apologizing to anyone for bringing them into the world.”

The man was disgusted. “You’re just like Donald Trump,” he said, “doing whatever the hell you want oblivious to its consequences for the world, and then refusing to apologize.”

Have you ever been in one of those conversations where you cannot meet the other person’s logic, yet you know you are right? This wasn’t quite the situation. I am well able to debate the premises and logic of his position.1 However, I did not and do not want to go there, because I’d rather invoke something other than quantitative calculations in making intimate decisions such as whether to have children.

First I want to say, in this time when everything seems to encode praise and blame, that I do not intend to elevate parents above those who choose another path. My intent is to celebrate that which often passes beneath notice.

Sometimes people tell me my writing and speaking has had a positive impact on themselves or the world. That may be. Usually I believe so as well; otherwise I would not continue doing it. But sometimes I visit a dark place where it seems all these years of labor have been for naught, or even had a negative impact. From there my life looks a waste—except for one thing, one indubitable truth. My children are a love-gift to the world. When I think of them in those dark times when every parenting mistake I’ve ever made flashes before my eyes, still I know that I have made a great gift to the future.

We pour endless hours into our children, changing diapers, giving them horsey rides, reading them Dr. Seuss, feeding them, protecting them, making them laugh; we were young when we started and when they finally leave the house as adults, our own youth has gone as well. We take a big part of our own lives and give it to them. Somehow, this love-gift must register on the scales of creation. I can’t prove it to you with numbers. I just want to nourish the part of you that knows it is true. I think of some of the heroic parents I know. Some may be reading this now. Yes, you Tracey. You, Rebekah. And you, and you, and yes, you too. Society may not notice or reward the love you pour into your children, or appreciate the sacrifices you have made. It may not look like a great deed, but it will surface eventually as great deeds done by your children, or their children, or maybe someone five hundred years hence when the seed you have tossed into the future lands on fertile ground.

Seldom do people include on their CV birthing or raising children. Compared to founding organizations, winning offices, creating new technology, or conceiving great ideas, society does not view raising children as an accomplishment. Perhaps that is because it is such a common thing, and our competition-oriented society tends to celebrate those who excel over others. Economic rewards flow accordingly. The work of raising children receives scant economic support. Parents receive no money from society for being parents, and professional caretakers of children like babysitters, day care workers and schoolteachers are among society’s lowest in pay and prestige.

To the other parents out there, and to all who pour labor and love into children, and especially to the mothers who sacrificed career opportunities to raise children: you have done some of the most important work there is to do. Society may not celebrate you today, but the future will. There is a reason that most cultures revere the ancestors. They recognize what I am saying here: that to give your life and youth to another being, so that they may become human, is a profound gift.

If we as a society really embraced that truth, we would offer more than token celebrations of parenthood in the form of Mothers’ Day and Fathers’ Day. We would reorganize all of our systems, starting with the economic. We would organize society in the spirit of, “How can we support your love-gift to the future?”

Yes, I’m sure some of my readers could offer calculations showing the damage per capita human beings are causing. And I’ve added four more capita. Ultimately though, the practice of navigating choices by the numbers is what has to a large degree gotten us into this mess. The reduction of the world to number and morality to a series of calculations leaves out everything that we cannot quantify. Can you quantify beauty? Can you quantify joy? Can you quantify love? No wonder our society, so enamored of rational cost-benefit decisions, has become in so many ways ugly, joyless, and unloving. That is what happens when decisions are guided by maximizing or minimizing a quantity, whether it is money, carbon, cases of an illness, square meters per dollar, or bushels per acre.

Maximizing money, we devalue everything that money cannot buy.

Minimizing carbon emissions, we commit to ecologically disastrous megadams, biofuels, and batteries, even cutting down forests to make room for solar farms and wind turbines.

Minimizing Covid numbers, or attempting to do so, we lock down and isolate and mask at the cost of what isn’t measured, like human connection, civil liberties, and, ironically, the health that comes from connection.

Maximizing bushels per acre, we deplete food of unmeasured nutrients and flavors, and rob land of its biodiversity, soil ecology, and resilience.

Do you see the pattern here? The point is not to ignore quantity. It is to understand what it leaves out. It is also to understand that the choice of what to measure and how to measure it determines what we see.

The idea that we can navigate life by the numbers is obviously ridiculous on a personal level. On the level of public policy it seems more plausible; after all, that’s what they call scientific policy-making. Either way, the ease with which the numbers can be manipulated to rationalize choices that come from elsewhere should caution against this approach. The world cannot (contrary to the metaphysical assumptions of science and the ideology of economics) be reduced to number. The harder we try to control life accordingly, the more out-of-control it becomes. That’s because all that the numbers, the plans, the fences, and the data leave still operates beyond our ken.

The choices we rationalize with the numbers come from elsewhere. The man who accosted me may not know the real reasons why he is childless. Whatever they were, I can honor them. Perhaps his love-gift to the future takes another form.

We will all be better off when we drop the rationalizations that install a falsely virtuous pretender onto the inner throne. These rationalizations cloak one’s real motives and prevent us from knowing ourselves; thus they rob us of true choice. It can be scary to rip off the cloak. Background myths of our civilization tell us that the naked self that will be revealed is ugly, that some despicable truth lies behind our pretenses, that to be naked is to be humiliated. It can indeed seem thus, when vain and selfish motives are revealed. But what lies beneath them? What is the nature of the life force that pulses through us and takes shape through our desires? It is love. Even when it is contorted into the knot called hate, still it is love. Love wants to bring more life to the world.