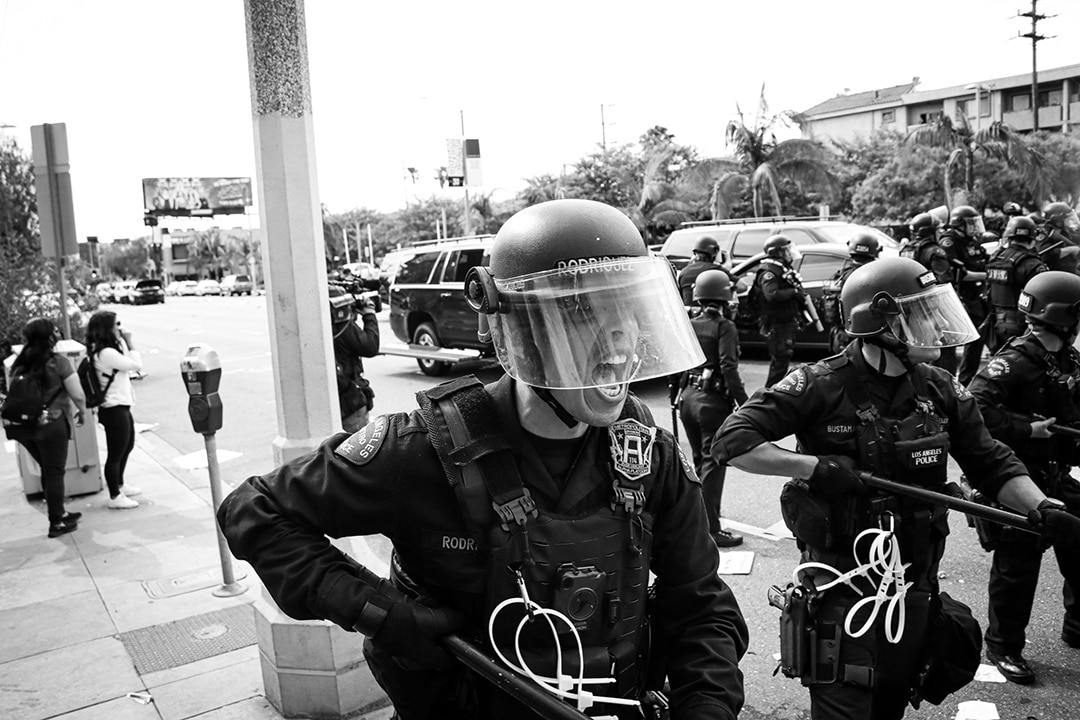 If you’re from inner city Birmingham, Alabama, there’s a “99 percent chance” you have a family member or friend who has been incarcerated, according to Veronica Johnson, deputy director for the Alabama Justice Initiative, which has been fighting against a proposal to build three new prisons in the state. She has an uncle serving a 60-year prison sentence.

“I’m a regular person,” she told The Appeal. “There’s nothing special about me.”

In the fall of 2020, Johnson, who is Black, traveled to rural Brierfield, Alabama—“deep into Trump country,” she said—to talk to residents about a new prison the state was planning to put in their community. It was a Sunday, and Johnson, who was wearing a headwrap with locks hanging out of the front, recalled wondering, “Do I look too ethnic?” As she went from door-to-door, the people she spoke to largely agreed that their community didn’t have the infrastructure to handle a 3,100-bed prison.

“Those people stood by our side—we crossed political lines,” Johnson said proudly. It was the “ultimate satisfaction.”

That campaign jump-started Communities Not Prisons, a coalition of grassroots activists, faith leaders, farmers, and national organizations, which eventually halted the proposed prison. The activists believed they had won the fight, but then COVID-19 hit, bringing a flood of federal relief money to Alabama—and, with it, renewed talk of prison expansion.

This injection of funds was triggered by the American Rescue Plan Act (ARPA), a $1.9 trillion economic stimulus package signed into law by President Joe Biden shortly after he took office. The money was intended to help the economy to rebound from the pandemic, but jurisdictions nationwide are moving to use the funds to recruit police, weaponize SWAT teams, and build jails—a move activists are calling a cash grab by law enforcement and its allies. During Biden’s State of the Union address on March 1, he said that as much as $350 billion from ARPA could be used to “fund the police,” a line that drew bipartisan applause from members of Congress.

In Alabama in 2021, the state Legislature approved $400 million in ARPA money to fund the prison projects Johnson and others thought they had stopped. Officials across the U.S. are pursuing similar plans to fortify the carceral state with funds ostensibly meant for COVID relief.

These moves come at a time when punitive responses to crime are facing an unprecedented crisis of legitimacy. People in communities of all sizes are organizing against the spending spree, building coalitions that cross racial and political lines. Some have even succeeded in using ARPA funds to build up mental health crisis response, behavioral health treatment, and other supportive services, which they say are more effective at improving public safety than police and prisons are.

The effort to funnel federal COVID relief dollars toward law enforcement began less than a year after protests in 2020 in response to George Floyd’s murder made “defund the police” a national rallying cry. More than 20 cities took action to reduce police budgets on the heels of that movement, though many have failed to follow through on those cuts.

As the midterm elections approach, Republicans and Democrats now appear to be competing to see which party can be the most outspokenly pro-police. Republicans have blamed Democrats for recent increases in violent crime, which they say are a result of reduced police budgets—though, in reality, there appears to be no correlation between crime rates and law enforcement funding. Biden and leading Democrats have disputed claims that they want to “defund the police,” holding up the ARPA funds given to law enforcement as proof.

Amid the current political debate, “Republicans have easily, barely lifting a finger, pushed Democrats into an ‘anti-police’ corner,” Kay Whitlock, co-author of the new book “Carceral Con: The Deceptive Terrain of Criminal Justice Reform,” said in an interview with The Appeal. “The result is that denunciation of ‘defund the police’ as a strategy and slogan has taken root among mainstream Democratic Party politicians.”

But Biden and top Democrats are now going beyond denouncing the “defund” slogan and are calling to substantially increase funding for law enforcement.

At a meeting last month with New York City Mayor (and former NYPD captain) Eric Adams, Biden encouraged cities and states to use ARPA funds “to keep our communities safe by hiring more police officers for community policing and paying police overtime.” The president also suggested law enforcement purchase acoustic surveillance technology designed to identify gunshots and dispatch police to the scene of a shooting, even as reporting has revealed that flaws in the technology can land innocent people in jail.

Private companies such as ShotSpotter, which sells gunshot detection devices like the ones Biden mentioned, are making big money off law enforcement purchases made with ARPA funds: to the tune of $3 million in Albuquerque, New Mexico; $2 million in Macon-Bibb County, Georgia; $1.2 million in New Haven, Connecticut; $171,000 in Syracuse, New York; and a proposed $7 million in Detroit.

In cities across the country, police are looking to pad their already hefty budgets by using federal dollars to pay for general expenses and new gadgets. In Fresno, California, police submitted a proposal requesting $6.8 million in ARPA funds to make improvements to the department’s headquarters and to purchase 33 patrol cars, 20 undercover vehicles, 15 SWAT sniper rifles, and a license plate reader, among other expenses.

Alexandra Alvarado, a community organizer with Faith in the Valley, who has been advocating for housing justice in Fresno, sees this as a gross misuse of relief funds earmarked for COVID-related issues. Communities hit hardest by the pandemic “have the solutions,” she said. “They know what they need, and it’s most definitely not more police vehicles.”

In Alabama, the fight over using ARPA funds for prisons could set a precedent for similar spending projects in other states.

Before the pandemic, the push for prison expansion in Alabama came to a head in 2019, when the U.S. Department of Justice released an investigation that found violence, deaths, and sexual abuse were occurring on “a regular basis” in state prisons.

Governor Kay Ivey, a Republican, responded with a plan to build three large new prisons, in Elmore County, Escambia County, and Bibb County, where Brierfield is located. Although the facilities were to be situated on state property, they would be financed by private underwriters and constructed by private companies, including CoreCivic—the second-largest private prison company in the U.S., reporting in 2021 a revenue of $1.69 billion.

In 2020, Johnson’s organization, Alabama Justice Initiative, founded by LaTonya Tate, launched the Communities Not Prison coalition to oppose the new prisons. They set up meetings with investors to convince them not to back the project. “It was on the cusp of Breonna Taylor and George Floyd,” Johnson said. “We told the banks not to participate in these unjust things.” One by one, they convinced the banks, and, in May 2021, Stifel Financial Corporation was the last financier to back out. Activists had hoped that the proposal was defeated.

When ARPA funds started flowing, however, backers of Alabama’s prison plan saw a new opportunity. In late September 2021, the Alabama Legislature passed a $1.3 billion prison-construction package that included $400 million from the American Rescue Plan—five times the amount budgeted for hospitals.

Communities Not Prisons and its allies sent a letter to Biden administration officials calling on them to block the spending.

In January, the Treasury Department released its final rule on the matter, stating that the construction of new correctional facilities was “ineligible” for ARPA dollars. But Alabama, apparently following its own rules, claimed that its proposal was “not impacted” by the decision.

The two sides are now in a standoff. As Johnson put it, “We feel like we won. They feel they won. Somebody didn’t win.”

Activists say it’s unlikely that the federal government will intervene directly. “It looks like Alabama is going to keep on trucking,” said Katie Glenn, a policy associate for the Southern Poverty Law Center Action Fund, which has joined the campaign against the prisons.

If Alabama simply ignores the Treasury’s guidance, supporters of proposals for prisons and jails in other states may feel emboldened to follow suit.

Officials in some jurisdictions have been nothing short of gleeful over the prospect of using pandemic relief funds to expand carceral infrastructure.

In February, administrators of the Oklahoma County Jail were caught on a voicemail recording calling COVID-19 “our friend” and “the greatest thing that has ever happened to us.” The jail had already received $10 million in federal funding under the 2020 CARES Act, and during the recorded conversation officials expressed hope that they’d receive “another $150 million” from ARPA. More than a dozen people died in the custody of the Oklahoma County Jail in 2021, and several more have died so far this year.

Hannah Royce is part of an ad hoc group in Oklahoma City organizing against the new jail funding. “If we really cared,” she said, “we would prioritize issues that get people into the jail in the first place—mental health crises, needing a place to sleep.”

The pandemic stalled similar plans for a jail expansion in Penobscot County, Maine, until the possible windfall of federal funding put the proposal back on the table. An energetic group of local activists is mobilizing against the project, arguing that it is wasteful and unnecessary. Doug Dunbar, one of the leaders of No Penobscot County Jail Expansion, spent time behind bars in the county lockup years ago. He rejects the claim that Penobscot needs a new jail to incarcerate more people.

“We don’t have an overcrowding problem,” Dunbar said. “We have an arrest problem.”

He noted that at the 15 jails in Maine, the daily population dropped by about 40 percent in the seven weeks following the first COVID-19 outbreak. Now officials in Penobscot are considering a plan to add 100 beds to the jail using a portion of the $29.5 million in ARPA funds the county is receiving.

In Eau Claire County, Wisconsin, Sheriff Ron Cramer announced a plan in the fall of 2021 to use $6.2 million in ARPA funds to expand the local jail, arguing that the expansion was needed to manage COVID-19 risks. David Carlson, co-founder of C.C. We Adapt, a local agency that provides peer support and mentorship, said the plan reeks of opportunism.

“There was no concern about COVID-19 for months into the pandemic, [and] now Sheriff Cramer is using social distancing as his reason for building out the jail,” Carlson said.

Around the country, some organizations have succeeded in directing federal dollars toward supportive services and alternatives to incarceration—though those programs are getting just a fraction of the funds allocated for police, jails, and prisons.

Late last year, officials in South Bend, Indiana, approved $2.7 million in ARPA funds to open a new crisis center. Jeff Walker is a member of Faith in Indiana, which helped to initiate the effort. He said the facility gives police a place to bring people who are struggling with issues related to mental health, substance use, or homelessness, “where they can receive diagnosis and treatment, instead of jail.”

In South Bend, as in many places across the nation, the people leading the campaign for carceral alternatives are themselves often familiar with the harms of the legal system. They’re people “who have family members in jail, who have seen them lose jobs and pay expensive fines for something that could have been treated,” Walker said.

As prison-abolitionist thinker Ruth Wilson Gilmore has said, “Abolition is about presence, not absence. It’s about building life-affirming institutions.” Now, two years into a devastating pandemic, the COVID relief funds in ARPA could present a once-in-a-lifetime opportunity to build institutions that can make a meaningful and lasting impact in ways that increasing police budgets and expanding prisons cannot. By investing in infrastructure that supports and uplifts, rather than punishes and destabilizes, communities could begin to fundamentally realign their approach to public health and safety—but they’ll have to be willing to fight for it.