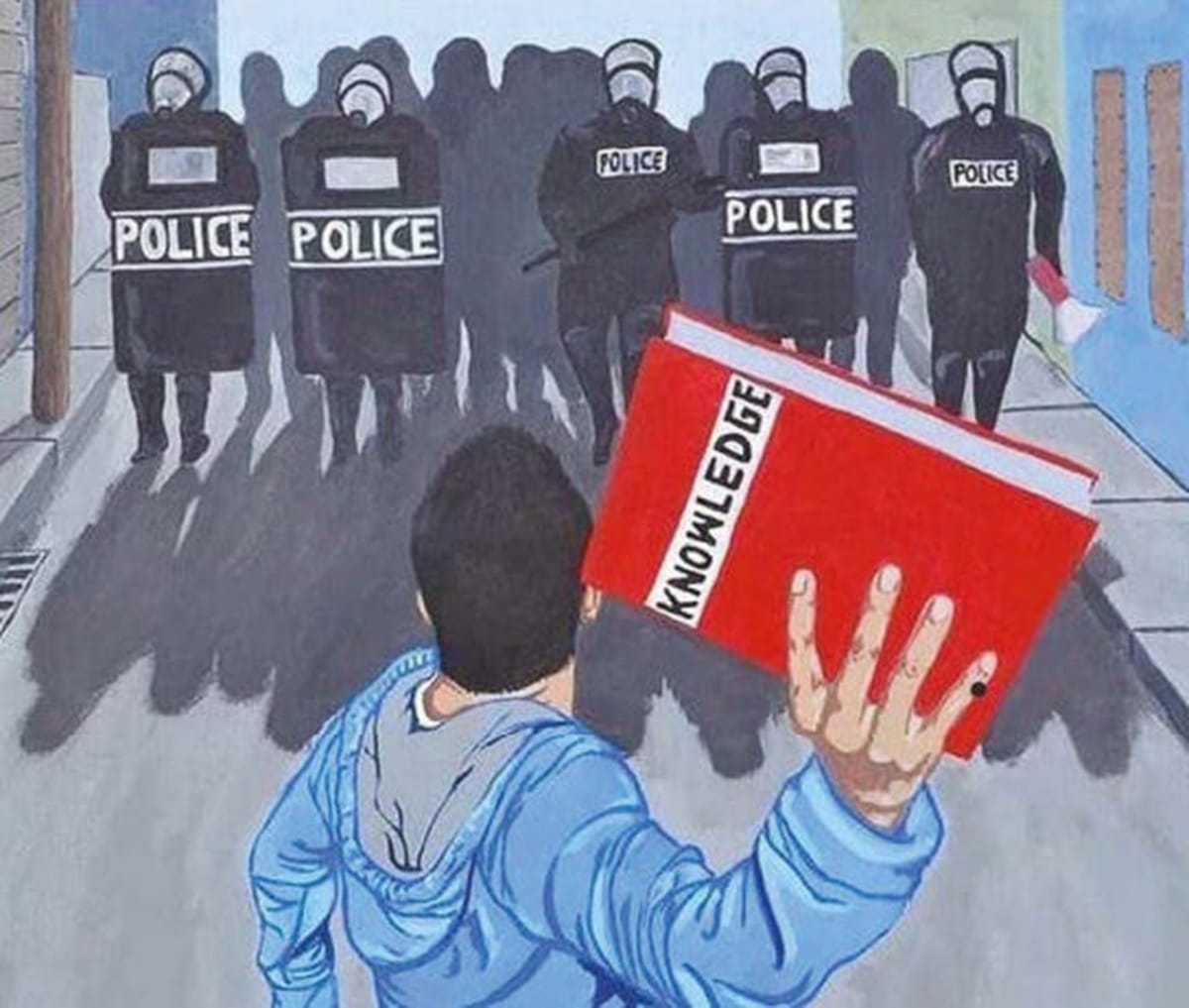 Ramping up the global inquisition

A few weeks back I wrote a piece about the way that anyone who challenges the dominant political agenda is liable to undergo a shaming, smearing, witch-hunting attack by what I called “the voice of the system”.

The case in question concerned a left-environmental publication in France which had dared to state its opposition to transhumanism and artificial wombs and was therefore depicted as “reactionary” by representatives of the public-private technocratic nexus.

Since then, other instances of the same phenomenon have come to my attention which confirm, once again, that this is not something confined to one country or even one continent, but is a worldwide assault on free speech which can only be described as a sinister global inquisition.

I have in front of me a copy of the international edition of The Daily Telegraph of Thursday January 12 2023, whose front page features a story entited “Bridgen loses whip over Holocaust tweet”.

Here we learn that a Conservative member of the UK parliament, Andrew Bridgen, has been disowned by his party, and condemned by his Prime Minister Rishi Sunak, on account of a remark he made on Twitter.

As a journalist, the first thing that strikes me about the article is that it is completely one-sided. There is no response, from Bridgen or anyone defending him, to balance the three accusatory voices wielded against him – not even a line saying that he had been approached for comment but had not responded at the time of going to press.

This is not good practice for a newspaper which pretends to be objective!

The second, and more important, remark I would make is that the headline and the framing of the story, indeed of the whole “scandal”, bear little relation to the reality of the situation.

Bridgen has become very unpopular in certain circles because he has addressed the issue of Covid “vaccines” and warned of the secondary effects and deaths which these much-promoted injections are demonstrably causing.

His now-deleted tweet came in this very context, stating: “As one consultant cardiologist said to me, this is the biggest crime against humanity since the Holocaust”.

Anyone paying attention will immediately grasp that Bridgen, or rather the doctor he was quoting and endorsing, did not say that this was a bigger crime than the Holocaust, or even that it was on the same scale, but that it was the biggest crime against humanity in the post-war period since 1945.

However, under the new inquisition, even to have noticed this flaw in the smearing narrative is, in itself, to have committed a thought crime, as Conservative local councillor Alex Stevenson discovered when he was suspended from his party for having made this very observation!

We learn from the Telegraph article that former health secretary Matt Hancock accused Bridgen of expressing “disgusting, anti-Semitic, anti-vax conspiracy theories”, which Sunak for his part described as “utterly unacceptable”, declaring that he was “determined that the scourge of anti-Semitism is eradicated”.

The Board of Deputies of British Jews, which seems to have been the first to pinpoint Bridgen’s tweet, stated: “For an MP to suggest that Covid vaccines are the biggest crime against humanity since the Holocaust is unconscionable”.

It is clear to me that the fabricated outrage over the reference to the Holocaust is merely the pretext under which Bridgen has been attacked, as reflected in the support he received from a Jewish human rights activist living in Israel.

🇮🇱 As a Jewish woman living in Israel, and a granddaughter to Holocaust survivors, I fully agree with @ABridgen.
NOTHING antisemitic in his statement.
Pls share. #FreeSpeech #Gaslighting pic.twitter.com/Eea02LhpNW

His real offence is obviously to be challenging the “vaccine” narrative and thus the interests of the pharmaceutical-military-financial complex which profits from it.

We are witnessing a small-scale re-run, in the Conservative Party this time, of the manufactured “anti-semitism” scandal that led to Jeremy Corbyn being replaced as leader of the Labour Party by Keir Starmer, a 2023 Davos attendee and longstanding member of The Trilaterial Commission, the globalist organisation founded in 1973 by David Rockefeller.

The real issue was never that of anti-semitism or even of Israel and Palestine, but the inconvenience that Corbyn’s social-democratic programme, with its emphasis on the “many” taking on the “few”, risked causing to powerful global financial interests.

We wrote: “This organisation previously came into prominence for its role in the Labour Party ‘anti-semitism’ controversy and its patron is Rachel Riley, the pro-Israel TV presenter who famously pointed the finger at Jeremy Corbyn.

“But the CCDH has now suddenly, and inexplicably, switched its focus to attacking those who dare to challenge the official line on the coronavirus.

“In doing so, it is using the very same language (‘hate’, ‘populism’, ‘conspiracy theories’) that it has previously used in an entirely different context. Very strange indeed!”

New Zealand is on the other side of the world to Britain, but it is of course part of The Commonwealth and thus deep within the global system which the British Empire helped build.

Under the now-resigned Jacinda Arden it has long been ramping up the authoritarian rhetoric against dissent and spreading the idea that “urgent” action is needed to combat the threat of “conspiracy theories” which have led to important pro-freedom protests.

An article on the newshub site this month reported on a “not-for-profit organisation” that wants to introduce political indoctrination in schools in order to “combat the spread of misinformation around COVID-19”.

This organisation, Tohatoha, (not ‘Tohaohas’ as the the report ironically misinforms us) apparently received funding during the pandemic, providing 10-week programmes for 24 schools per term, but, tragically, “its funding is set to run out” – hence the need, presumably, to present an “urgent” need for its services!

It echoes the messaging of Britain’s CCDH in its plea to “build social cohesion by calling out hate” and, intriguingly, pursues a parallel agenda to make New Zealand “a digital nation with a digitally sophisticated population”, to enact “digital transformation” and create “a just and equitable digital world–for Aotearoa and the planet”.

Its chief executive Mandy Henk, a founding member of the People’s Library at Occupy Wall Street, is attached to DePauw University in Indiana, USA, an institution which prides itself on its “global impact“.

Just how far New Zealand’s “transformation” into a model techno-fascist society has advanced can be judged by the treatment meted out to Australian dissident magazine New Dawn.

A campaign launched by the Stuff website led to the publication being withdrawn from sale in bookshops across New Zealand.

Again, I suspect that the real reason it has been targeted is that it challenges Big Pharma’s “vaccine” story, the most important narrative of the moment.

But the attack was principally launched on the basis of an article about the Christchurch Mosques shootings of 2019.

The Stuff article quotes Kate Hannah, director of something called The Disinformation Project, as saying said some of the commentary in New Dawn was “borderline in legality”.

However, she and Stuff are, themselves, guilty of disinformation in claiming that the article “describes the content of livestreamed video of the Christchurch shootings, as well [as] where it had been published, which could encourage people to seek it out”, with the warning that “watching and distributing the video is illegal in New Zealand, following a ban from the Chief Censor”. (Yes, such a person really exists!)

As anyone can see by taking a look at the New Dawn issue in question (which can be viewed online here), it merely refers to the shooter’s livestreaming without providing any means or encouragement for readers to view it.

As well as playing the usual “hate” card by claiming the article was “harmful to the Muslim community, the wider Christchurch community, and to social cohesion in New Zealand”, Hannah added another level of alarmist insinuation to the mix by warning: “People who see and/or consume such content must understand that there are larger and more dark agendas present, particularly the Russian connections, which aim to destabilise liberal democracy”.

When Hanhah says “liberal democracy” she really means the authoritarian global public-private power structure that has revealed its existence to so many since 2020.

Hence she declares that “the older conspiratorial narratives are now completely embedded with contemporary or newer ones, such as Covid-19 conspiracy and denial, false flag narratives, and the concept of the grand conspiracy called The Great Reset”.

The absurd dishonesty of her implication that The Great Reset was invented by “conspiracy theorists”, rather than publicly announced by Klaus Schwab of the WEF and launched by King Charles III, points to the toxic falsity of her associated implications that false flag terrorism does not exist and that seeing through lies amounts to “denial”.

Disinformation expert Hannah certainly has a vested interest in defending the global system. She is Principal Investigator for Te Pūnaha Matatini (“Data, Knowledge, Insight”), an organisation “committed to increasing equity, diversity, access, and inclusion in science and research” and whose advisory board includes Pieta Brown of Orion Health, a global healthcare digital data firm, and Atawhai Tibble, who is interested in “the measurement of cultural capital” and works for the Social Investment Agency, the state organisation rolling out public-private impact investment in New Zealand.

Hannah also works with the Global Partnership on Artificial Intelligence, a “multistakeholder initiative bringing together leading experts from science, industry, civil society, international organizations and government” whose Secretariat is hosted at the Organisation for Economic Cooperation and Development (OECD), whose origins and activities I explored here.

One of the smearing techniques often used by the global inquisitors is to attempt to contaminate one person’s reputation by linking them to another person whose reputation they have already contaminated by some dishonest means.

Each lie they tell therefore becomes a launching pad for further lies and can be used to attack heretics without the need for any further “incriminating” evidence.

This method was used by The Guardian on January 13 2023 in its assault on cardiologist Aseem Malhotra when it complained that “Malhotra recently retweeted a video by the MP Andrew Bridgen, who had the Tory whip removed on Wednesday after comparing the use of Covid vaccines to the Holocaust”.

The outrage was sparked by the fact that Malhotra had somehow managed to express his concerns about the Covid jabs on BBC rolling news, explaining that his own research showed they carried a cardiovascular risk and calling for them to be halted pending an inquiry because of concerns over excess deaths.

His video of the interview was apparently viewed more than 800,000 times in under four hours.

Because Malhotra deviated from the system’s authorised script – he “made unprompted claims” in the BBC’s terms – he was laughably accused of “hijacking” his own TV interview!

The Guardian stated: “Experts have criticised Dr Aseem Malhotra’s appearance on the corporation’s news channel on Friday, accusing him of pushing ‘extreme fringe’ views, which are ‘misguided’, ‘dangerous’ and could mislead the public”.

Ah yes, of course, experts… As if a cardiologist has no claim on that label!

The Deadline website’s report on Malhotra also chose to throw in a reference to Bridgen, described here as a “disgraced lawmaker who compared Covid shots to Holocaust”.

Its trump card in refuting Malhotra’s truth-telling was the declaration that “Malhotra’s research has been debunked by Health Feedback, a World Health Organization-backed group that verifies scientific claims made about vaccine safety in the media”.

Criticism of the pharmaceutical-financial complex can credibly be “debunked” by that same system? Highlighting dangers to people’s health is, in itself, “dangerous”? Professionals with the courage to tell the truth as they see it are misleading the public with “extreme fringe” views?

Every absurdity becomes a possibility in the reality-inversing world of The Great Racket and its global inquisition.