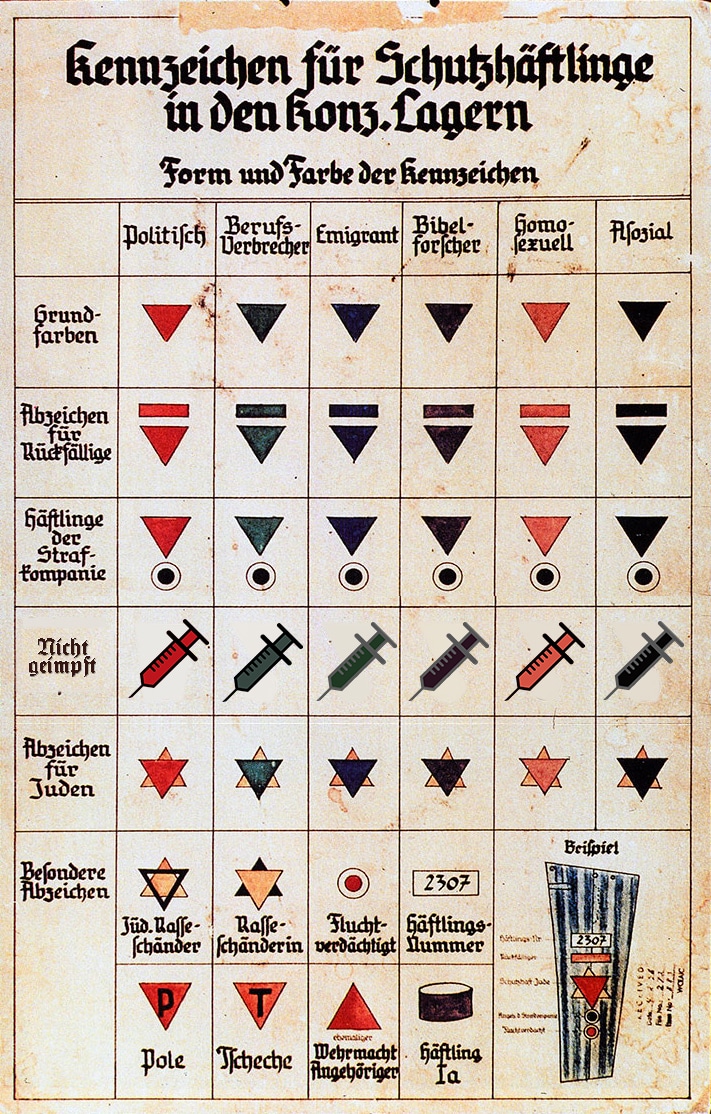 Review: The Rise of the New Normal Reich by C.J. Hopkins

Over the last few days, I have been devouring C.J. Hopkins latest book, The Rise of the New Normal Reich. It is a superb work of political economy documenting the insanity of the last two years. Reading the book is medicine for my soul.

Hopkins is an American playwright who now lives in Germany. I just discovered his Substack in the last few months and it’s fantastic: 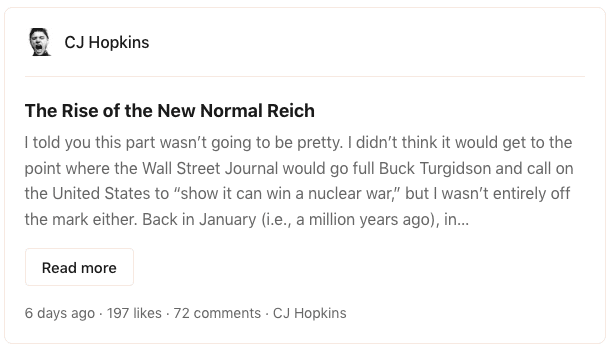 I suppose one could find all of the essays that are assembled in the book for free online. But it’s so much nicer to have an actual paper book in one’s hands than to stare at the screen. Other essay collections sometimes jump around but this one has a nice coherent through-line and it’s fascinating to watch his thinking develop over time.

His thesis is elegant and spot on. In the introductory chapter he writes:

After the fall of the Soviet Union and the collapse of the credibility of communism as a viable competing ideology, the global-capitalist power network (or “GloboCap” as I like to call it) launched a global “clear-and-hold” operation, identifying and wiping out pockets of resistance, economically, militarily, and ideologically.

It started in the former Soviet-bloc countries, the Middle East, and Africa in the early 1990s, and expanded throughout most of the rest of the world like an aggressive metastatic cancer during the 15-year-long “Global War on Terror.”

As GloboCap was conducting this clear-and-hold op in far-flung places all around the world, it was also conducting it in the heart of empire, not as dramatically, but just as effectively, gradually, and sometimes not so gradually, destabilizing, restructuring, and privatizing society.

Which is all global capitalism knows how to do. GloboCap isn’t a conspiracy of evil individuals with a megalomaniacal vision. It’s a machine. A values-decoding machine. It’s function, ideologically speaking , is to eradicate any and all social values that interfere with the flows of capital and replace them all with a single value (i.e. exchange value) rendering everything a commodity, and transforming society into a marketplace.

All of that was going swimmingly for GloboCap until Trump came along with his energized base of Americans who had lost out on jobs and livelihoods because of globalization. So GloboCap quickly retooled the War on Terror(TM) into a War on Populism(TM) — to take out Trump and any other populist movement that threatened global profits including the yellow vest movement in France, Jeremy Corbyn in the U.K., and the Bernie Sanders’ presidential campaigns.

Now GloboCap has found the perfect vehicle for accomplishing its totalizing goals — the coronavirus pandemic. Hopkins calls it The New Normal Reich. Because of global trade, surveillance technology, and the destruction of ideological alternatives, the New Normal Reich aims to be the first truly global system of totalitarianism.

Hopkins also offers keen insights into the role of ideology in the new totalitarian scheme:

Whereas 20th-Century totalitarianism wore its politics on its sleeve, New Normal totalitarianism presents itself as a non-ideological (i.e. supra-political) reaction to a public health emergency. (p. 209)

It is difficult to fight a system that denies its very existent even while it rapidly assembles a totalizing, inescapable, corporatized Reality(TM). Margaret Thatcher’s “There is no alternative” has become global and now includes thrice yearly injections of experimental genetically modified mRNA.

I just want to add a few points to Hopkins’ exquisite critique.

1. Our opponent is not just Global Capitalism per se. I would be happy for people to sell their crafts via the internet all over the world (indeed I just bought a lovely meditation bench from a craftsperson in the U.K.).

What we are up against is Global Monopoly Capitalism (GloboMonoCap) and that’s a completely different beast altogether.

Competition in the marketplace is exhausting, uncertain, and cuts into profit margins. So capitalists look for ways to consolidate and collude. What we are left with now is the illusion of choice, via a wide range of brands, that are all controlled by a tiny handful of giant multinational companies. Monopolies and oligopolies solve the collective action problem (for capital) and enable the consolidated corporate sector to spend all of their time capturing the political system and using it to their advantage.

2. Totalitarianism rears its ugly head so frequently — Nazis, the Soviet Union, China, cults, controlling spouses/partners, and now the entire developed world — that it must be some sort of universal flaw in human nature.

My hunch is that, to borrow a phrase from Milan Kundera, “it’s a folding screen set up to curtain off death.” Modernity is a curse. We have too much time to think because we are not usually busy fighting for survival. So we project our fears onto the other, with the thought that if we could only control all aspects of our own lives and the lives of others that somehow we could live forever.

3. Hopkins is correct that we are fighting against the structure and logic of the global capitalist power network rather than individual actors. Bill Gates and Klaus Schwab are enthusiastic in their malevolence, but, as Hopkins writes, “you could shoot all these people in the head tomorrow and they would be seamlessly replaced with other people performing more or less the identical functions, i.e. destabilizing, restructuring, and privatizing everything.” (p. 18).

What I want to point out is that the coordinating mechanism driving the New Normal totalitarianism is the fact that the base determines the superstructure. I’ve written about this before.

The “base’“ is the mode of production in any era — the types of work, the tools, and the relations between classes. The “superstructure” refers to the principles, laws, culture, and even religious values (let’s call them the governing principles) of that society.

The base right now is not just white collar “knowledge production” fields (such as education, medicine, etc.) that I’ve mentioned before, but monopoly capitalism itself. In the developed world, people increasingly work for oligopolies and monopolies. And people just seem to instinctively know that their livelihood depends on taking care of the Leviathan that they work for.

So it all happens automatically. Rachel Maddow, all of my friends who went fascist, and half of the developed world just woke up one day and knew that they had to implement the New Normal Reich because it is right and good and The Science(TM).

Because the base determines the superstructure, setting up our own alternative economy becomes more important than ever.

4. For reasons I don’t quite understand yet, totalitarianism and genocide go hand in hand. It turns out that we were never modern. Tony Fauci, Rochelle Walensky, and Francis Collins (because technology and bureaucracy give them more reach) engage in more ritual human sacrifice than even the most bloodthirsty Mayan or Aztec high priests. The systematic destruction of human life seems to keep some people in line, eliminates enemies, but more than that it seems to feed some dark hunger (thanatos) in the population and among elites.

Again I think it’s an immortality project along the lines of point #2 above. These people want to feel all-powerful, Godlike, and deciding the fate of another apparently gives them that rush. Thanks to Global Monopoly Capitalism now millions of people can participate in ritual human sacrifice every day — from pediatricians to public health workers to Leana Wen and Michael Osterholm going on TV every five minutes to tell people that it is their duty to participate in the self-inflicted genocide because that’s just what Good People(TM) do.

Hopkins is actually somewhat optimistic. He thinks that we punched the bully in the face over the last year and knocked GloboCap back a bit.

My comfort comes from knowing that totalitarian systems inevitably collapse under the weight of their own absurdity.

The single most important thing all of us can do right now to stop the New Normal Reich is to contact the FDA every day to tell them:

2. Moderna and Pfizer do not work in kids and cause catastrophic harms.

3. No more shortcuts. All future Covid-19 shots must go through full clinical trials.