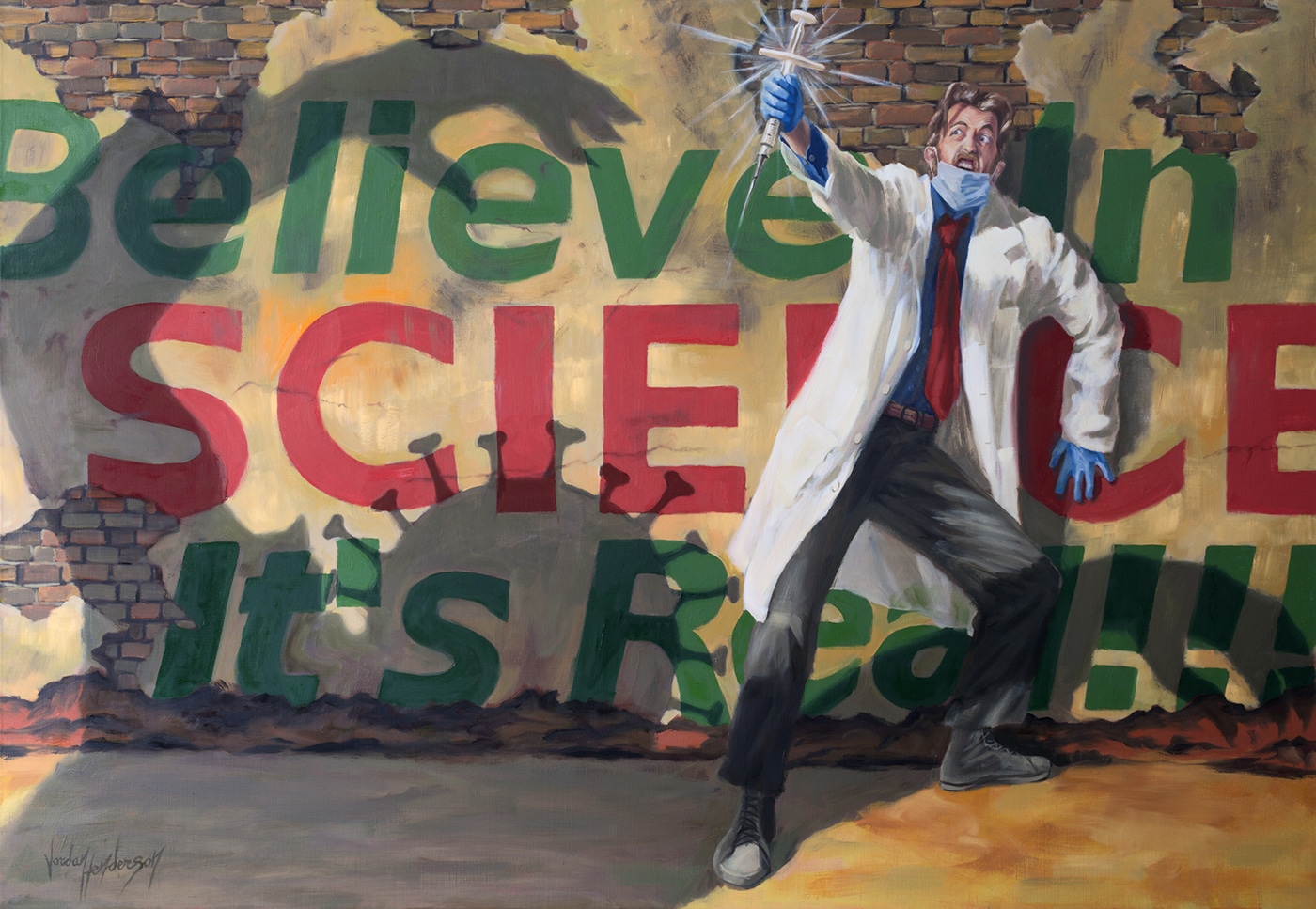 Science! Blessed be Thy Name: The Vanishing Value of Religious Freedom

I want to first illustrate our new reality, through two written examples. The first example under the subheading “A Little Chat About the Good News,” presents the dogmas of The Science in satire through religious terminology.

The second example under the subheading “Proof of Baptism Required,” is the reverse and asks us to imagine what it would look like if governments were forcing religious dogmas and rituals upon the population in place of scientific dogmas and rituals.

1st Example: A Little Chat About the Good News

Do you have a moment? Can I tell you a little about our Savior Science?

Have you heard the good news about vaccines? Here let me share with you. I’ll just open up The Holy Scriptures of the Peer Reviewed Journals, turn to the Book of Pharma, and there we go! Chapter 20, verse 19, The Doctrine of Salvation Through Vaccination: (clears throat)

Now, have you accepted vaccinations into your body as your savior and protector? No?! Then repent and get vaccinated! For as we know from the Doctrine of Original Infection:

Look, I know that you have fallen prey to conspiracy theories, but you have to understand that The Science is beyond your capability to evaluate or critique. Discerning the truth is the job of the Scientist, your job is to trust and believe what the Approved Scientists tell you. Have faith in The Science, for as it is written:

“Science is the way, the truth, and the light, none come to the truth save through Science”

What if the government of the USA decreed that no foreigners would be allowed in unless they showed proof of having been baptized?

What if State and local governments ordered lockdowns of all non-religious activity on Sundays?

What if governments at all levels mandated the wearing of an outward statement of faith such as a cross necklace in certain places, and for travel?

What if proof of baptism and the wearing of cross necklaces was a requirement in order to work for the government?

Freedom of Religion is an Inadequate Relic

Religious Freedom entails both the freedom to practice a religion of your choice if you so choose, and it also crucially involves freedom from other people’s religions. That is to say a society that could be regarded as having Religious Freedom would be one in which no one would be mandated to take part in the rites and rituals of any given religion.

Western governments and ruling classes can easily afford Religious Freedom for the commoners because they no longer use religion as the primary means of justifying their power. Temporal authorities force upon the populace the belief systems that they control and that they use to justify their power, which are now science and democracy as defined by the state.

Bragging about Religious Freedom in the USA , as the Patriotic Right here is prone to do, is akin to bragging about how we don’t burn witches at the stake anymore. You have the freedom to be a witch or sorcerer and we won’t burn you – Wow what a freedom! Considering that as a society we almost all condemn the burning of witches, and have condemned this for some time, it is absolutely unimpressive and nothing to brag about that we don’t burn witches anymore.

Likewise Western culture by and large has long since moved past the imposition of a state chosen religion and more or less allowed everyone to practice their own choice of religion. Consequently, the freedom to go to church on Sunday, or Saturday, or frequent a synagogue, or attend no religious services at all, is nothing to brag about. No one in the West would have any excuse to do otherwise than allow this basic Religious Freedom – it’s not even an expectation, it’s a given.

But this progress is actually an illusion, we need only move beyond the inadequate term Religious Freedom, and think in the just slightly broader term Freedom of Belief System and we can immediately see that we do not have a Freedom of Belief System, and the state is still imposing a state chosen, official belief system upon us – The Science.

Even your basic right to attend a church/synagogue/mosque is only permitted to you until the dominant belief system, The Science, says otherwise. When The Science says no church (as was the case in the lockdowns) there is no church. Who needs to tell businesses when they can be open or closed based on old fashioned Sunday Laws? No one, because now authorities can close businesses and events at will, based on Science Laws.

“Ah, but unlike those silly religions, science is for real”

Such is an objection we might expect to hear from The Followers of The Science who “know” that their faith in The Science is justified, and they “know” The Science is right, and therefore they believe that the state has the right to force the rituals and rites of The Science upon the non-believers. Well let’s think about it:

“We can’t afford to pretend that The Science has no more a corner on The Truth than mere religions; if we don’t adhere to the rituals and rites of The Science (Vaccines, Masks, Lockdowns, Testing, and yet more Vaccines) and impose them upon all society we will all suffer from the Wrath of Scien . . . I mean the microbes will breed in the unclean bodies of the Unvaccinated and then they will infect the true believers, the Vaccinated!”

Once again, the same arguments belief systems always use as justification for imposing themselves through force on non-believers and heretics: All of society will suffer unless everyone complies with the dominant belief system. Let’s go even further back, before Christians and Muslims, and use an example straight out of the Old Testament.

So you see, the Israelites had to stone that guy to death, not because Moses was an authoritarian control freak who demanded that no one dare defy his authority. No, not at all, it wasn’t a power play or anything like that, no, Moses was simply following the scie – I mean God told him to, Moses said so himself.

Throughout the Old Testament it is a recurring theme that everyone must comply, for noncompliance will bring God’s wrath upon the nation of Israel, or God will turn his back on Israel as their enemies overrun them. In other words, compliance with the dictates of priestly authority was basically framed in the terms of public safety.

Nothing has changed, only the name of the excuse; authorities now force compliance with The Science rather than God’s laws, but it is the exact same ploy. The authorities pretend that they are not ordering you around, they are just following something else like God’s laws or The Science, and they just so happen to be in a position to decide what God or The Science demands. It’s all about sacrificing individual freedom (of the commoners) to protect the group from the boogeyman of God’s wrath or the latest virus. The boogeyman can be held at bay by certain rituals which only work if everyone does them, to appease God or The Science.

In the Middle Ages heretics were burnt to protect society from being infected by their ideas. You see the authorities didn’t want to burn the heretics, and honestly I believe the authorities really probably didn’t want to burn them in most cases, but they had to, to stop the spread of heresy. They saw heresy as a disease infecting the body of believers – the church. The medieval authorities had to stop the spread of dangerous misinformation (heresy) that could have lost people their salvation.

Covid facemasks are one such tall tale spun for no other reason than to provide justification for The Followers of The Science to force one of their Covid rites upon the non-believers. The truth of this statement is demonstrable through a simple logical analysis;

Covid facemasks could do one of two things for the wearer:

1. Block the particle size they claim the virus to be transmitted through (droplets, aerosols, whatever they’re laying blame on).

2. Fail to block the aforementioned particles.

If the facemasks could actually block particles down to the particle size of concern, the wearer would not need anyone else to wear one in order to receive protection.

If, however, the facemasks The Followers of The Science wore, and some still wear, fail to block the size of particles that they are paranoid about, then they should have gotten better masks that do.

None of the scientific mumbo jumbo about droplets counts for anything here; either the masks can block particles in question or they can’t. If they can, problem solved. If they can’t – then believers should be wearing ones that can.

The Followers of The Science should have been wearing respirators that actually have a proper seal around the face. The government could have spent some of it’s Covid trillions in ensuring that every Follower of The Science on the planet who wanted one, had a proper respirator.

The only reason to insist on masks that have no proper seal, and at best block a small portion of the particle size in question, rather than emphasizing respirators that could have at least worked in theory, was to give an excuse to the authorities to force this Covid rite upon the nonbelievers.

I’m aware that Covid-19 was a means to an end (many ends) for ruling elites, but they couldn’t have pulled it off without science as a belief system. Organized Science is the handmaid of the powerful both by providing the powerful with real scientific developments and for providing temporal authorities with an aura of legitimacy through scientific “truths” fabricated to order.

In terms of Freedom of Belief System, we can say that we have progressed about to the Middle Ages. From the legal standpoint of governments and their judiciaries throughout the world; your freedom ends where the superstitions of The Science begin.

“The vaccination practice, pushed to the front on all occasions by the medical profession, and through political connivance made compulsory by the state, has not only become the chief menace and gravest danger to the health of the rising generation, but likewise the crowning outrage upon the personal liberty of the American citizen . . .

Previous to the Reformation the state stood behind the priest and enforced his edicts, from whence thousands of victims fell before the steel and the flame of a merciless persecution. Today the state stands behind the commercialized, fee hunting doctor, to enforce his vaccination fraud against the lives and health of millions of little children. It is especially for the removal of this disgraceful compulsory curse that I speak as with a tongue of flame, that I make my earnest, impassioned plea. Restore the American citizen to his liberty in matters medical as we have guaranteed his liberty in matters religious, and then if the medical profession have any specific of value to offer, the common sense of the people will come to know and adopt it.