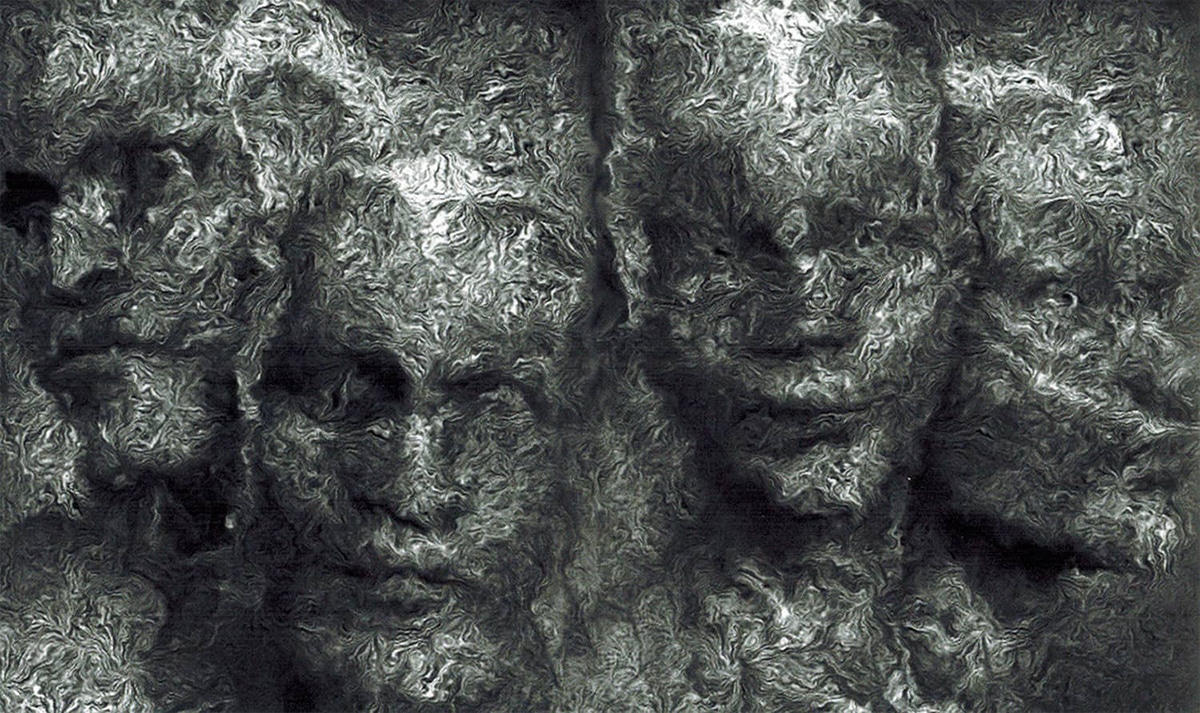 We are the hollow men
We are the stuffed men
Leaning together
Headpiece filled with straw. Alas!

When many people share thoughts, speech, or conduct that is frequently repeated and becomes automatic, it is fair to call it a social habit.  Such habits tend to become invisible and unspeakable. They become part of our taken-for-granted-world.

When I recently wrote an essay about hoarding – “The Last Temptation of Things,” many people got angry with me.  A friend wrote to me to say: “I congratulate and curse you for writing this.”  He meant it as a complement.  I took it as meaning I had touched a raw nerve and it touched off a series of further thoughts about social habits and people’s angry reactions when they are challenged.

Some people who criticized me absurdly complained that I was supporting Klaus Schwab and the World Economic Forum’s “You Will Own Nothing” campaign, something I have opposed from the start.  Others said that I was attacking people who kept mementos and photographs, etc. and that I was advocating living in a shack.  This was clearly false.  Some got it, of course, and knew that I was using an extreme example to make a point about excessive saving of all sorts of things and how debilitating it is to surround ourselves with far more than we could ever use, need, or even know we have.  My case study was a friend’s house that my wife and I had just cleaned out in an exhaustive case of what felt like an exorcism.

Now I see that there is a clear connection between hoarding – or whatever word you choose to give it when the saving of things is excessive – and propaganda. Both are forms of habitual clutter, one mental and the other physical, the former imposed from without and accepted passively and the latter self-created to try to protect from loss.  In both cases, the suggestion that your social habits need to be examined is often greeted as a threat to one’s “existence”  and elicits anger or dismissal.

Sociologists, of which I am one, have various terms for what I am calling social habits.  They don’t speak the language of ordinary people, and so their lingo rarely enters into common discourse to be heard by most people. Such verbiage often just mystifies.

But habit is a plain and clear word, and social habit simply extends the meaning I am referring to.  José Ortega Y Gasset, the Spanish philosopher, and Max Weber referred to it as “usage” before settling on habit.  While usage is accurate, it lacks the stickiness of habit, which is the simplest word and one everyone understands as behavior that has become automatic through frequent repetition.

For example, in the inconsequential realm of clothing fashions, men are now wearing tight leg-fitting pants, and it seems normal to most, just as loose pants did in the past.  It will change, of course, and a new or ”old” social fashion habit will replace it and most will go with it.  Either way you choose you lose – or win – depending on whether or not you follow the fashions of dress, which mean little or much depending on whether you interpret them symbolically as signifying  more than their appearances present.

It is true that all ideas, language usage, and behavior become second nature until they are not.  For example, “my bad” may no longer be good, as far as I know, a phrase I have avoided along with “a ton of fun,” “you guys,” and “overseas contingency operations.”

Some social habits persist for a very long time because they are continually reinforced with propaganda that created them in the first place.  As Jacques Ellul has emphasized, such propaganda is not the touch of a magic wand.  “It is based on slow, constant impregnation.  It creates convictions and compliance that are effective only by continuous repetition.”  Like a slowly dripping faucet, it drips and drips and drips to reinforce its point.

Take the hatred of Russia promulgated by the U.S. government.  It is more than a century old.  Few Americans know that the U.S. invaded Russia in 1918 to try to stop the Russian Revolution.  Today’s U.S. war against Russia is nothing new, yet many people buy the daily lies about the war in Ukraine because it is a habit of mind, part of their taken-for-granted-world.

Take the CIA assassinations of President Kennedy and his brother, Robert.  For decades the U.S. media has worked hand-in-glove with the CIA to reinforce the official lies by calling those who have exposed those lies “conspiracy theorists,” a term that the CIA itself promoted and the media continues to use daily to ridicule dissent.  The phrase “conspiracy theorist” is a handy social usage regularly used now to dismiss critics of any official claim, not just the Kennedys’ murders.  Additionally, it is used to lump together the most absurd claims available – e.g. a Martian woman gives birth to a cat in Las Vegas – with the exposure of real government conspiracies in order to dismiss both as ridiculous.

Take the U.S. government assassination of Dr. Martin Luther King, Jr. that has been covered up by giving MLK, Jr. his own holiday and reducing his message to pablum.  Now you can have a day of service to forget King’s passionate denunciation of the U.S. government as the most violent nation on the earth and the government’s murder of him for his powerful anti-war stance and his campaign for economic justice for all.

Take the attacks of September 11, 2001 and the subsequent anthrax attacks.  They too were wrapped in propaganda from day one that has been reinforced since, resulting in the social habit shared by the majority that Osama bin Laden and nineteen Arab hijackers planned and carried out the attacks.  This propaganda supported the U.S. invasion of Iraq and the so-called war on terror that has never ended, the destruction of Libya, Afghanistan, the ongoing war against Syria, the aggression toward China, and the U.S. war against Russia, to name the most obvious. And it ushered in twenty-one years and counting of the squelching of civil liberties, government censorship, and surveillance.  All this with no mass resistance from a population lost in the taken-for-granted world of mind control.  Their minds cluttered with lies.

Take the Covid pandemic propaganda that introduced  the New Normal in March 2020 and continues today.  Destroying small businesses, crippling the economies, fattening up the elites and the wealthiest classes and corporations, injecting millions with untested mRNA so-called vaccines, this diabolical Big Lie has accustomed people to accepting further restrictions on their natural rights under the guise of protecting their health while severely damaging their health.  Despite the fact that all the official claims have been proven false, the fear of death and disease, promoted for many years, has dramatically entered into the social bloodstream and additional censorship of dissenting voices has been embraced.

In all these examples and so many more, people’s minds have been slowly and insidiously filled with ideas and distorted facts that are false and controlling, similar to a hoarder’s accretion of objects that can overwhelm them. The propagandists have stuffed them with “things” that can assuage their fear of emptiness and the consequent possibility of being able to think clearly for themselves. Excessive information is the last thing people need, for as C. Wright Mills said sixty years ago, “… in this age of Fact, information often dominates their attention and overwhelms their capacities to assimilate it.”

Above all he is a victim of emptiness – he is a man devoid of meaning. He is very busy, but he is emotionally empty, open to all entreaties and in search of only one thing – something to fill his inner void …. He is available and ready to listen to propaganda. He is the lonely man …. For it, propaganda, encompassing Human Relations, is an incomparable remedy.  It corresponds to the need to share, to be a member of a community, to lose oneself in a group, to embrace a collective ideology that will end loneliness. Propaganda is the true remedy for loneliness.

And whenever one questions any of the social habits that sustain people’s illusions, their reactions can be sharp and shrill.  To suggest that people collect too many things out of a fear of emptiness, as I did with the hoarding piece, becomes a direct attack on some deep sense they have of themselves.  As if the “stuff” were an extension of their identities without which they would drown.   Even more threatening to so many is to question their opinions about Covid 19, JFK, RFK, the U.S war against Russia, 9/11, etc., and to suggest they have swallowed massive doses of deep-state propaganda. This often infuriates them.

It is “unspeakable,” as the Trappist monk Thomas Merton said, as quoted by James W. Douglass in his extraordinary book, JFK and The Unspeakable:

One of the awful facts of our age is the evidence that the [world] is stricken indeed, stricken to the very core of its being by the presence of the Unspeakable …. It is the void that contradicts everything that is spoken even before the words are said; the void that gets into the language of public and official declarations at the very moment when they are pronounced, and makes them ring dead with the hollowness of the abyss. It is the void out of which Eichmann drew the punctilious exactitude of his obedience …

Social habits are very hard to break, especially when they are reinforced by official propaganda.  They tend to be addictive.  Ownership and use of the cell phone is a prime example.  Such phones are a key element in the digital revolution that has allowed for increased social control and propaganda.  Few can give them up.  And when your mind is filled with years of propaganda that has become second-nature, your ability to think independently is extremely limited.  There is no place for the creative emptiness that leads to genuine thought.  Dissent becomes “conspiracy theory.”

But Eliot may have been wrong in the way he ended his poem:

It may end with a bang while many just whimper.