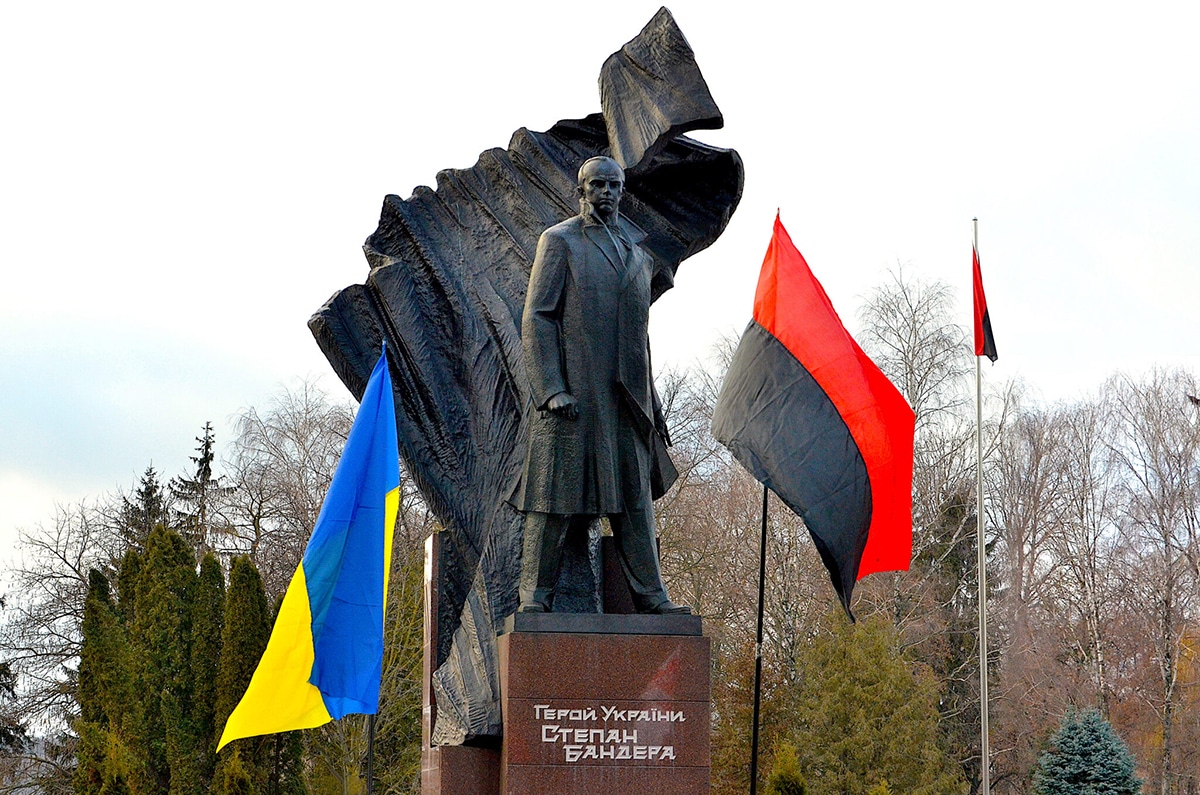 In May 1986 I received orders to attend a counterterrorism awareness course at the John F. Kennedy Special Warfare School, in Fort Bragg, North Carolina. For the next two weeks I learned about the various terrorist threats facing the United States military, and was taught various skills to overcome them, such as high-speed evasive driving, counter-surveillance methodology and reactive shooting techniques.

Upon my return to Twenty-Nine Palms, where I was stationed as a Marine Corps intelligence officer, I was given the task of putting my newly learned skills to work by carrying out a base-wide counterterrorism exercise. I borrowed a scout-sniper team from the infantry battalion on base, and set them up in an apartment off base, where I turned them into a terrorist cell tasked with collecting intelligence on the senior officers who lived and worked on the base. The only rule was that the terrorists could not engage with civilians — no families were to be impacted by the drill.

Over the course of the next 30 days, my terrorist team was able to “assassinate” every battalion commander, the regimental commander and the base commander, using improvised explosive devices and sniper fire — and had the photographs to prove it.

The takeaway from this exercise was that if someone wanted you dead, you were probably going to die.

Throughout my professional life, I have had occasion to use the skills I learned at Fort Bragg on several occasions — I was targeted for assassination while working as a U.N. weapons inspector in Iraq and I was informed that I was the subject of a “hit” put out by the Russian mafia for my role in breaking up an illicit missile component smuggling ring.

Today, I’m a 61-year-old writer living in the suburbs of Albany, New York. It’s a quiet neighborhood, where everyone knows everyone. And yet, due to recent circumstances, I once again find myself inspecting my vehicle before getting inside, keeping a watchful eye out for strange vehicles driving down my street and conducting counter-surveillance maneuvers while driving.

Why the paranoia? Simply put, my name has been added to a Ukrainian “kill list.” Think I’m getting too wound up? Ask the family of Daria Dugina, the 29-year-old daughter of the Russian philosopher Alexander Dugin. Both she and her father were on the same list. Both were targeted for death by an assassin dispatched by the Ukrainian security services. Only a last-second change of plans, which put Alexander Dugin behind the wheel of a different car, kept him from being killed in the blast that took the life of his daughter. 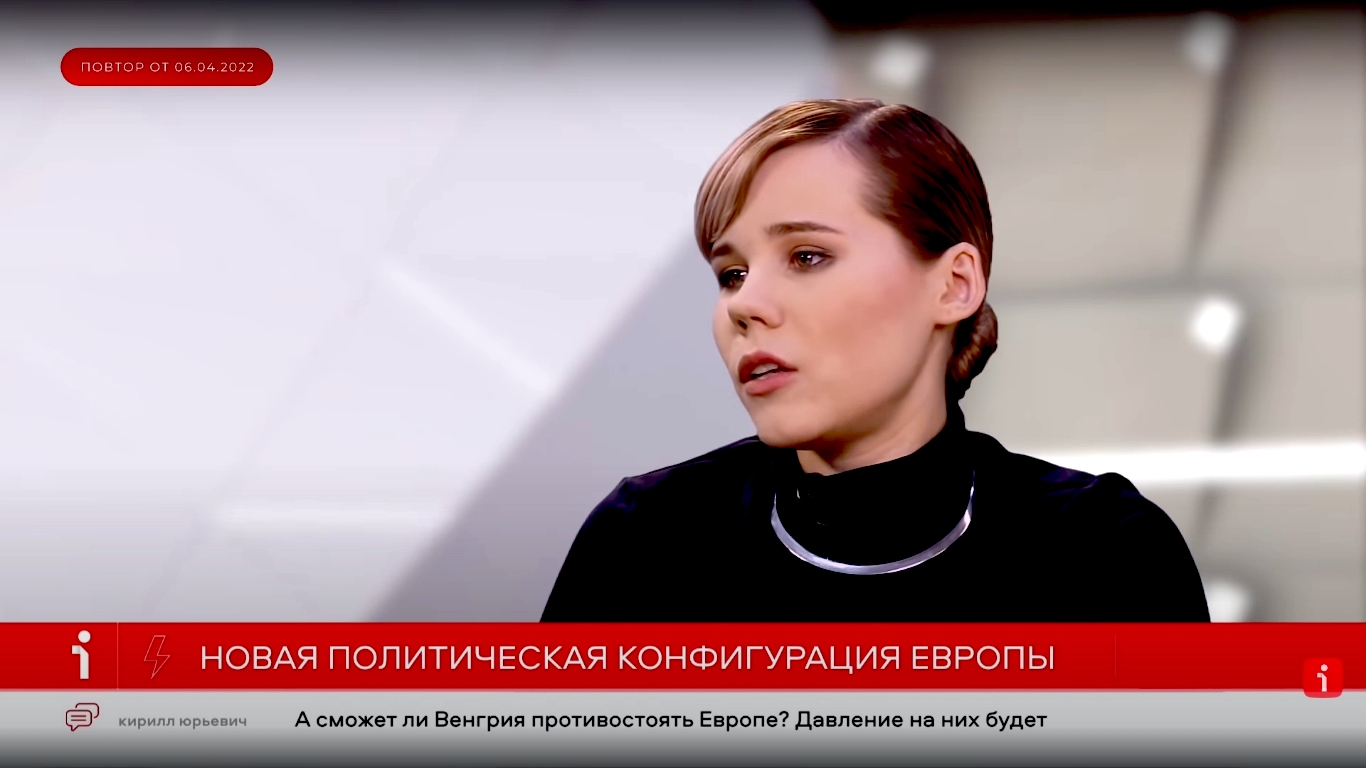 I’ve been writing for some time now about the Ukrainian Center for Countering Disinformation and their publication in mid-July of a “blacklist” containing the names of 72 intellectuals, journalists, activists and politicians from several countries who were labeled “Russian propagandists” by the Ukrainian government for having the audacity to speak critically, yet factually, about the ongoing Russian-Ukrainian conflict.

I took umbrage over this list for several reasons, first and foremost that the salaries of the Ukrainians who compiled this list appeared to be paid by the U.S. taxpayer using funds appropriated by Congress for that very purpose. The idea of Congress passing a law which empowered the Ukrainian government to do something — suppress the First Amendment guarantees of free speech and a free press — that Congress was Constitutionally prohibited from doing angered me.

So, too, did the fact that the Center for Countering Disinformation announced the existence of this “blacklist” at a function organized by a U.S.-funded NGO and attended by State Department officials who sat mute while their Ukrainian colleagues labeled the persons on this list “information terrorists” who deserved to be arrested and prosecuted as “war criminals.”

At the time, I cautioned that the use of such inflammatory language meant that the “blacklist” could be turned into a “kill list” simply by having a fanatic decide to take justice into his or her own hands. Given that the U.S. government funded the creation of this list, organized the meeting where it was presented to the world and gave an implicit stamp of approval to the list and its accompanying labeling through the attendance of U.S. government officials, these fanatics don’t have to be foreign sourced. Plenty of people in the U.S. adhere to the same hate-filled ideology that exists in Ukraine today and which gave birth to the “blacklist.”

Some of them are my neighbors.

In June I drove down to Bethel, New York (the site of the original Woodstock music festival), to participate in a Spartan Obstacle Course Race. To get there, I had to drive past Ellenville, a sleepy little town that is home to a camp belonging to the Ukrainian American Youth Association which, every summer, coordinates with the Organization for the Defense of Four Freedoms of Ukraine to hold a “Heroes’ Holiday” honoring veteran of the Ukrainian People’s Army and the Organization of Ukrainian Nationalists.

I just realized the principal CYM-A camp is in Ellenville, NY, the same Ulster county I live in. CYM-A [aka SUMA]’s Ellenville camp (“Oselia”) pictured below: the year it opened (1955), on the 25th anniversary of the UPA leader’s death (1975), and its “Heroes Monument” today. pic.twitter.com/1AHa9sDKL1

The camp boasts a “Heroes’ Monument”, consists of a 42-foot-tall structure with a Ukrainian trident at the top flanked by the busts of Yevhen Konovalets, Symon Petliura, Roman Shukhevych and Stepan Bandera —four leading figures in the history of Ukrainian nationalism, all of whom were involved in the murders, collectively, of hundreds of thousands of Jews, Poles and Russians.

Bandera has been elevated to the status of a national hero in Ukraine, and his birthday is considered a national holiday.

That a monument to men responsible for genocidal mass murder and who, in the case of two of them (Shukhevych and Bandera) openly collaborated with Nazi Germany, could be erected in the United States is disturbing.

That every year Ukrainian-American adherents of the odious ideology of Stepan Bandera gather to celebrate his legacy at a “children’s camp” where the youth are arrayed in brown uniforms that make them look like what they, in fact, are — ideological storm troopers for a hateful neo-Nazi ideology that promotes the racial superiority of the Ukrainian people, is an national abomination.

Here is another, newer CYM-A camp (“Beskyd”) which can be found in Baraboo, Wisconsin, featuring its fascist “Heroes Monument,” including a bust of the wanna-be Hitler of Ukraine, Stepan Bandera. pic.twitter.com/RYTqcTQTaD

From Ellenville to Bethel, I saw evidence of this hateful reality in every blue-and-yellow Ukrainian flag fluttering in the wind — and every red-and-black banner of the Bandera-worshipping Ukrainian neo-Nazi fanatics that fluttered next to them.

The legacy of Stepan Bandera is at the very heart of what passes for Ukrainian nationalism today. It dominates the political arena inside Ukraine, where all competing political ideology and affiliations have been outlawed by President Volodymyr Zelensky.

It is behind the suppression of all dissenting voices — foreign and domestic — that dare challenge the narrative about the Russian-Ukrainian conflict being promulgated by the Ukrainian government, its Western allies, and a compliant mainstream media.

After Consortium News published my letter to my New York congressional delegation (Sens. Chuck Schumer and Kirsten Gillibrand and Rep. Paul Tonko), in which I called them out for voting for Public Law 117-128 appropriating $40 billion in U.S. taxpayer money to underwrite the Ukrainian government and military, there was concerted action by others impacted by the Ukrainian “blacklist,” which the legislation had funded.  This was led by Diane Sare, the LaRouche Party candidate challenging Schumer for his Senate seat.

The publicity about congressionally-funded suppression of free speech appeared to be too much for those who are complicit in a frontal assault on the U.S. Constitution. The Center for Countering Disinformation’s “blacklist” was removed from the internet. 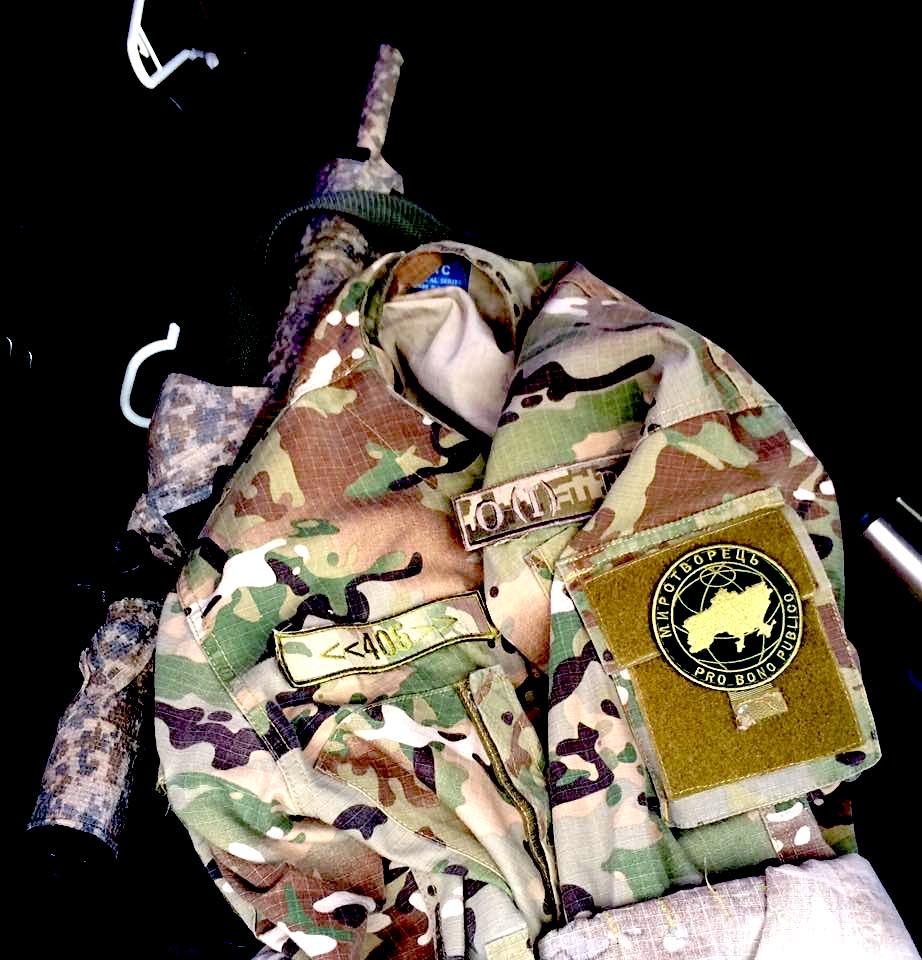 The Myrotvorets list has been in existence since 2014 and has been described as “effectively a death list for politicians, journalists, entrepreneurs and other public figures who have been ‘cleared for firing’” by the list’s creators.

And now so is mine, along with several other Westerners, such as Canadian journalist Eva Bartlett and British rock musician Roger Waters. 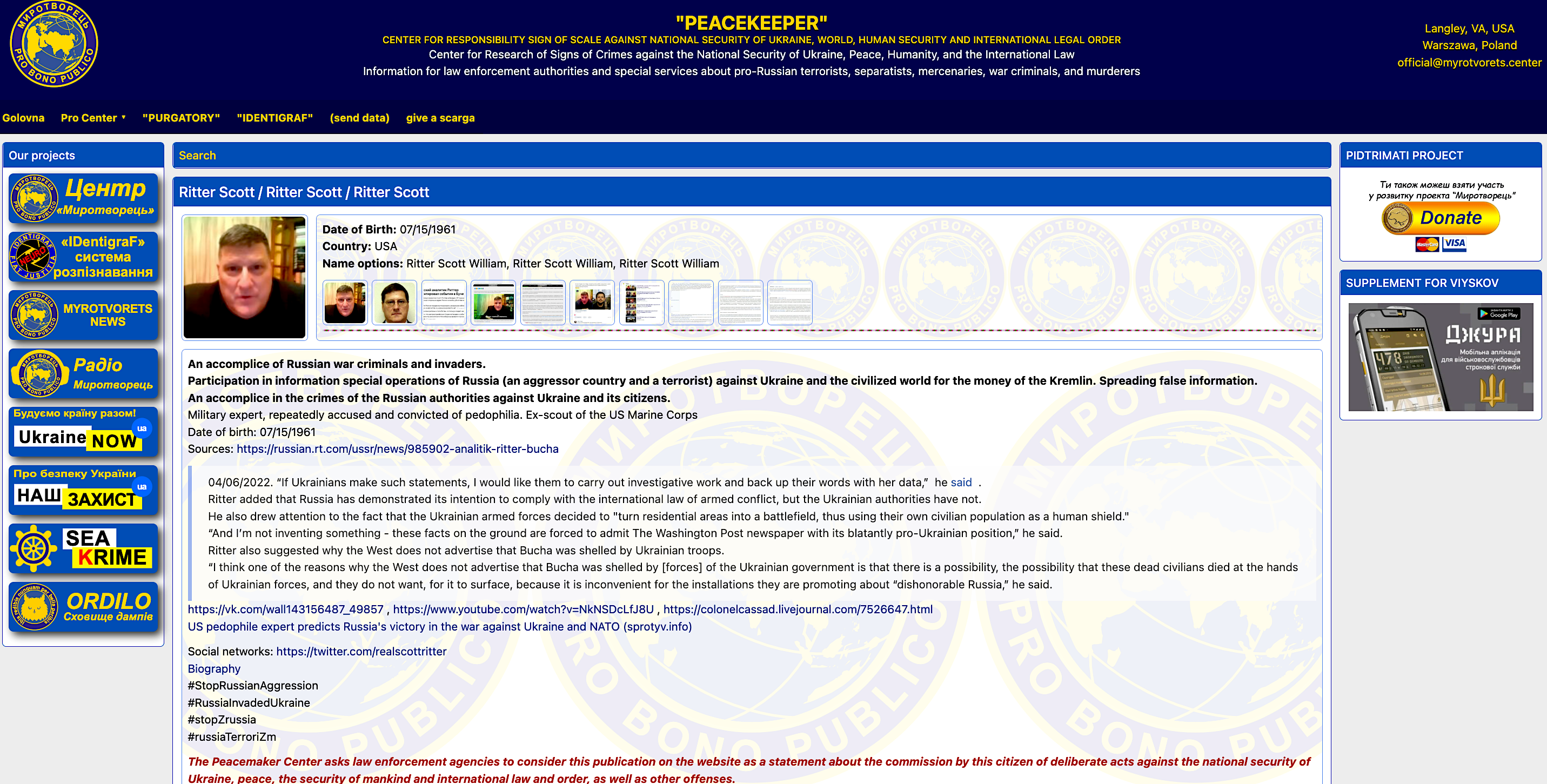 The Biden administration is silent about this abomination.

“any activity that involves an act that is dangerous to human life or potentially destructive of critical infrastructure or key resources; and is a violation of the criminal laws of the United States or of any State or other subdivision of the United States; and appears to be intended to intimidate or coerce a civilian population, to influence the policy of a government by intimidation or coercion, or to affect the conduct of a government by mass destruction, assassination, or kidnapping.”

There is little doubt that the murder of Daria Dugina was an act of terrorism perpetrated on behalf of the Ukrainian government. (Her photo on the list now has the word “liquidated” written diagonally across it in red.)

While the Ukrainians deny any such allegations, Russian authorities have assembled a convincing factual case to the contrary.

The existence of the Myrotvorets “death list” is an instrument of terror and should be taken down at the insistence of the U.S. Government.

The failure of the Ukrainian government to shut down the Myrotvorets Center and condemn its activities would constitute material support of terrorism.

The U.S. should also recognize any organizations which embrace the ideology of Stepan Bandera as terrorist entities — including those responsible for raising a new generation of brown-shirted neo-Nazis in the heartland of America.

The “Hero’s Monument” in Ellenville must be closed, and the statues of Bandera and the other three Ukrainian nationalists removed from public view.

It is a national disgrace that U.S. citizens are subjected to death threats from an erstwhile ally of the United States for simply exercising their Constitutional right of free speech. The adherents to the ideology of Stepan Bandera, in Ukraine and in the United States, must be treated as terrorists, and prosecuted with the same level of intensity and purpose as were the followers of al-Qaeda and the Islamic State.

Until this is done, I will have no choice but to take the appropriate precautions to make sure that neither my family nor I suffer the fate of Daria Dugina.