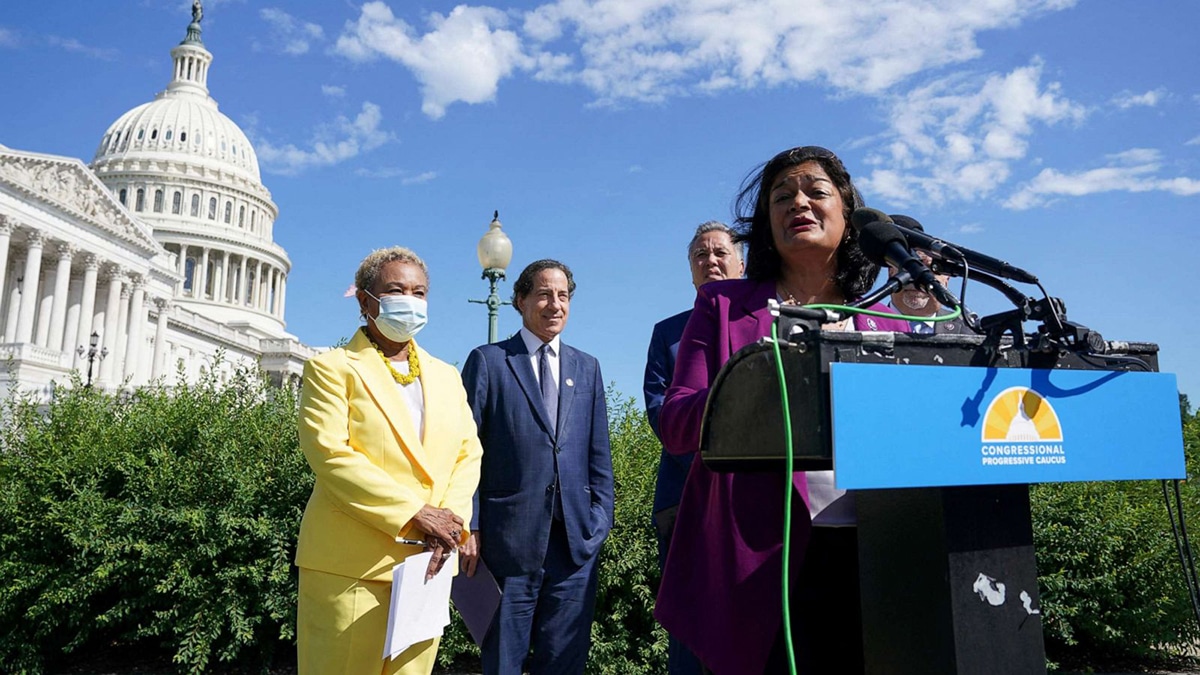 The Democrats’ Assault on Diplomacy

It is only two years since Joe Biden, hitting the hustings in pursuit of the White House, had to promise big change on the foreign policy side. Americans were beyond weary of the forever wars. People were beginning to see that the Pentagon’s outlandish budget had everything to do with America’s miserable social welfare programs, collapsing infrastructure, poor public education, and so on.

“Diplomacy first” it was for Team Biden, resort to the military last. His main national security people—Antony Blinken, Jake Sullivan, William Burns—couldn’t stress the theme often enough. Lots of people—and I was not among them—thought it was terrif, a promising sign that the ship of state was at last changing course, that Burns, a former diplomat of ambassador rank, had been named director of the Central Intelligence Agency. No more covert ops and interventions.

Burns, I will remind readers, was among those who once upon a time counseled against advancing NATO eastward to Russia’s borders and provoking Moscow by arming the Ukrainians.

That was how the Biden people sounded back then. It was what many, many Americans wanted to hear. But the optimists didn’t quite understand that hearing it was all they were ever going to do. As soon as Biden won the November 2020 election and named the aforementioned to senior national security posts, all the talk of diplomacy went the way of “Build Back Better,” a higher minimum wage, no first use of nuclear weapons, and all the other promises Biden made and broke as quickly as you can say “No more support for the Yemen war.”

Burns—a second reminder—is now as hawkish as they come in support of the proxy war in Ukraine that lately has the whole world frightened of a nuclear exchange.

The recent fiasco following the “Dear Mr. President” letter the so-called progressive caucus published, modified, and outright retracted in 24 hours pushes our faces into many bitter truths. One of them is that diplomacy has not dropped from first resort to second or even last. It no longer rates consideration of any kind among the policy cliques and on Capitol Hill. A few years ago those of us who advocated a neo-détente with Russia wondered amid all the primitive attacks we endured whether our critics were criminalizing diplomacy. This is a pretty close call given the fallout since 29 of the 30 congresspeople who signed the infamous letter, which meekly proposed opening talks with Moscow, now cower pitifully in the corner.

Ro Khanna deserves mention here. The California Democrat is the sole signatory to stand by the letter amid the warmongers’ din, telling CNN last week that advocating a diplomatic channel between Washington and Moscow is nothing more than “common sense.” This is the case, open and shut, but common sense is plainly not welcome in the corridors of power anymore.

I well recall thinking after Alexandria Ocasio–Cortez, Rashida Tlaib, Ilhan Omar, and their “progressive” colleagues were elected to Congress in 2018 that all the fuss and fanfare was misplaced. I figured Washington would either eat them alive or force them to fold their cards and conform. We now have confirmation, if any were needed, that the latter of these has come to be. “The Squad,” whatever its members’ youthful altruism, is a pack of nebbishes in a heated competition with President Biden to see who can break more promises. Utterly useless.

Lesson No. 2: For the moment, and it looks to be a long moment, it is impossible to present a case for an alternative foreign policy in this country. In the years before he died in 2020, Steve Cohen, the noted Russianist, used to say there was only one political party in America, the War Party. What I took then to be a clever figure of speech is now the grimmest of realities.

The letter that detonated a political explosion last week is the work of mice who forgot how to roar, if ever they knew. Its signatories took great care to protect their political flanks by opening with unreserved praise for Biden’s profligate military support for the Kyiv regime and an implicit condemnation of Russia. Only when these signals are sent does the letter suggest that the administration “pair the military and economic support the United States has provided to Ukraine with a proactive diplomatic push.”

For this the signers were called every name you can think of and some you probably cannot. Faced with a vociferous roomful of protestors who justly felt betrayed by her position on the war in Ukraine and the retracted letter, Ilhan Omar gave us the opening to another lesson. “I am sorry, you aren’t ‘antiwar protesters,’” she wrote on Twitter, “you are dangerous propagandists who are literally making a mockery of the antiwar movement. I have never had the pleasure of responding to [Russia’s] ridiculous internet disinformation in person before. Thank you for the opportunity.” 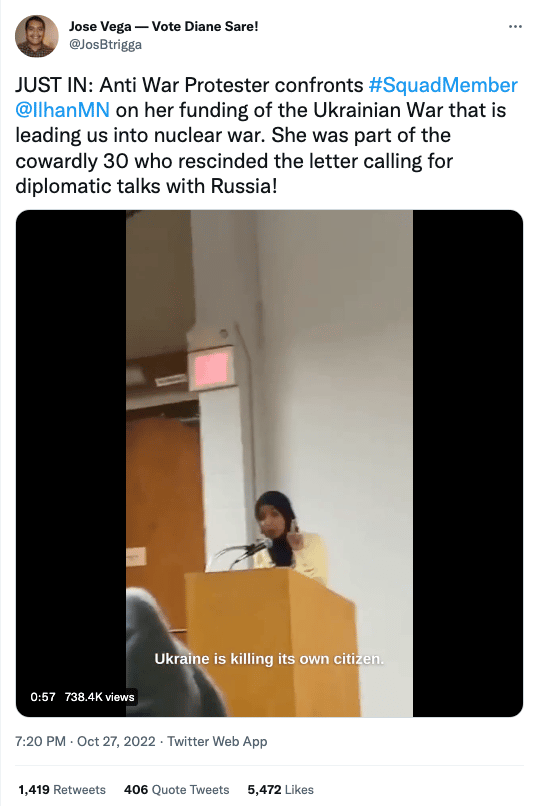 What a punk. And Omar’s punkery leads us to our next lesson.

Lesson No. 3: When the Democratic Party fingered Russia after Hillary Clinton’s embarrassing mail was leaked in 2016, it was soon evident that in the small cause of Clinton’s political reputation the Democratic elite was perfectly willing to set loose a wave of paranoiac Russophobia with vast geopolitical consequences. There is a straight line between that episode and the “diplomacy never” line now prevalent in Washington. The state of hysteria that grips the policy cliques on all things to do with Russia is in large measure Hillary Clinton’s legacy.

I have always detested the deplorable Clinton and her allies for this recklessness. And for another reason as she ran for president: Republicans are who they are and make few bones about it; Clinton and her liberal insincerities were scoring off the legitimate aspirations of ordinary Americans to sell them a late-imperial foreign policy diametrically opposed to their interests.

I put Omar and her colleagues in the same file now.

Which brings us to Lesson No. 3a: The utter fraud of “identity politics”—a blight upon us all—now has people of color selling Americans war in the name of peace, diversity, democracy, and an antiwar consciousness. They are every bit the charlatans Hillary Clinton has so frequently proven to be.

The administration has taken the occasion of the letter to confirm that the official line is that any question of negotiations toward a diplomatic settlement is for Kyiv’s to decide. This is a patently ridiculous dodge. So far as can be made out, Kyiv does nothing without Washington’s dispensation, excesses such as the regime’s call for NATO to strike Russia with a preemptive nuclear attack notwithstanding.

Lesson No. 4: The U.S. cannot speak straightly or honestly at this stage in its late-imperial decline. All is obfuscation. Those purporting to lead America have given themselves over to sheer force and force alone to defend a passing hegemony that is ultimately indefensible. They have nothing else left—a truth that cannot, of course, be acknowledged. We are left with the diplomacy of no diplomacy, as I have called this condition elsewhere.

Not to be missed in the shout fest we witnessed in Washington last week, there is a growing number of voices calling for a diplomatic opening between Washington and Moscow—this on both sides of the Atlantic. You can hear these voices in The National Interest, as noted in this space a few weeks ago, or in Newsweek or in the Financial Times. The Council on Foreign Relations weighed in on October 28, when Foreign Affairs, its august house organ, published a piece under the headline, “Don’t Rule Out Diplomacy in Ukraine.”

Nobody is howling at those radical screwballs on East 68th Street. What is going on here?

Lesson No. 5 is to my mind one of the most frightening. In our unmapped, unprecedented condition—Mama never said there’d be days like this—the force of language itself, the most essential instrument in the exercise of dissent, is waning. This is surely among the morbid symptoms—Gramsci’s famous phrase—of a nation willing to destroy itself in the name of a lost primacy.

It has been evident for some time that America’s political process is indifferent to the wishes of those who continue to participate in it. Now it is also evident the ruling elites have rendered themselves immune to the power of language, and they are immune to the power of language because they are immune to rational thought. We must ask: Does anything we say matter to those who exercise power most directly?

The answer here is other than bright and cheerful. It follows only—forgive the paradox—that those who hold to the imperative of reason and rational discourse must keep on saying and saying and saying, a little like Medieval monks scribbling manuscripts to preserve civilization from the barbarity all around them.