The Narratives They Are a-Changin’

This story is a collection of emotional news (and quick one, I gotta run since I am speaking at a rally shortly).

This stupid SNL skit about how maybe masks never worked made me cry, literally, in a raw manner. I am crying as I am typing this newsletter. They yelled at us. They yelled and yelled and yelled. They shamed us. They made us feel like second-class citizens. They made us feel like we are guilty of murdering unspecified old people for feeling the basic need to walk around with open faces and breathe normal oxygen instead of own exhaust. They assaulted our right to interact with each other and enjoy each other’s smiles.

The science didn’t change. The narrative did. Cruel, cruel people. And yes, the repercussions of this will be unfolding for the years to come, and pundits will pontificate in a shallow, disconnected way as they do—but the reality is that a lot of people have been abused, for no reason at all. Zero reason. None.

And while I wish every fellow human the kindest awakening, is anyone ever going to say that we’ve been right all along?

#2. My article about “conspiracy theories” of the past and the very real and well-documented plan to push through the awful Fourth Industrial Revolution was published by Mercola (PDF). In the article, I talk about the statements on the 4IR on government websites, in the agreement between the UN and the WEF, etc.—as well as about the Internet of Bodies, “neuroweaponology” (an official thing, as indignant as I feel about it), and mainstream accounts of graphene-based materials in medical use.

#3. A few things came out recently about the possibility of mRNA contained in the COVID injections possibly reverse-transcribing into human DNA.

Let me state my exact position here. Am I a microbiologist with an intimate understanding of the intracellular mechanisms? No! Do I have a definite opinion on whether the mRNA from COVID injections gets transcribed into the recipient’s DNA in some occasions? I have no way of knowing!

However, I am a human being with eyes and strong self-preservation instincts. And I know that the CDC lie like they breathe. For example, they told us that the injection (and the spikes) stay at at the site of injection. They still say that. Which is completely untrue.

And it’s been shown that the injection biodistribution is unpredictable, and the synthetic mRNA in COVID injections may cause (and seemingly often causes) human cells in all organs grow spikes on their surface, like little hairs.

So why on Earth would I trust the CDC?!!!

Anyway, the studies that came out (including, seemingly, Pfizer’s own document?) imply that it is not impossible for mRNA contained in COVID injections to be under some circumstances reverse-transcribed into human DNA. Does it happen in every case? Probably not. Is any health official panting hard to make sure it cannot happen? In my dreams!!!

The below is food for thought, and hopefully a whole lot of qualified microbiologists look into it!!!

(Meanwhile, allegedly, in Chile, they are passing a law that prohibits employers to discriminate against genetically impaired employees? Would love to know more on this.)

Article 1.- No employer may condition the hiring of workers, their permanence or the renewal of their contract, or the promotion or mobility in their employment, to the absence of mutations or alterations in their genome that cause a predisposition or a high risk of a pathology that may manifest itself during the course of the employment relationship, nor require for such purposes any certificate or examination that allows verifying that the worker does not have mutations or alterations of genetic material in his human genome that may lead to the development or manifest in a disease or physical or mental abnormality in the future. 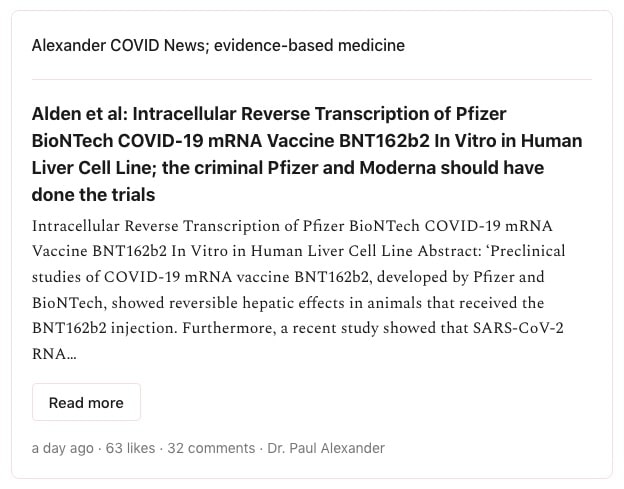