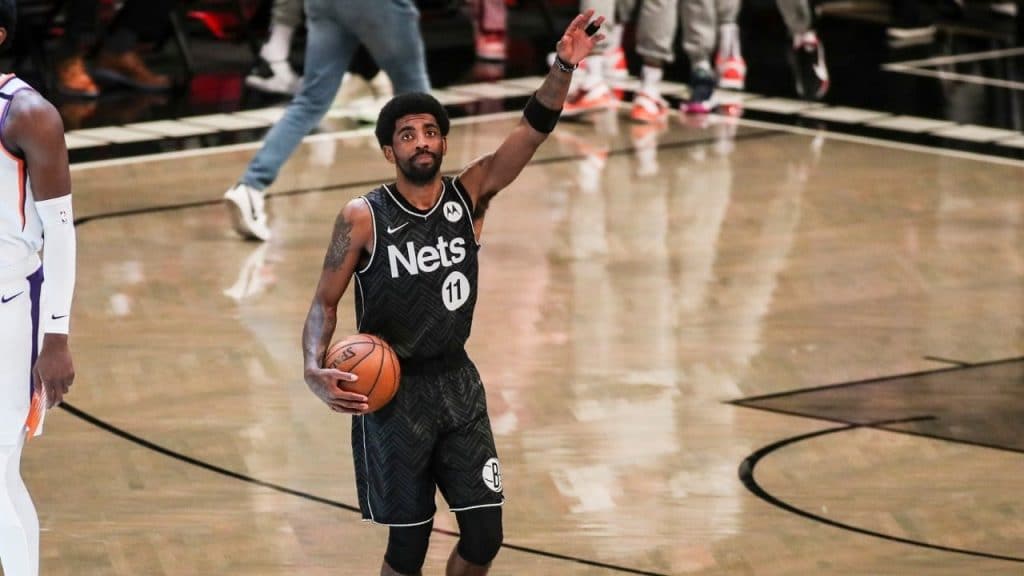 “Unvaccinated” pros, like Kyrie Irving, can once again suit up in the Rotten Apple

I have always loved the game of basketball. I grew up in a small town and only a short walk from a playground where, during the summer months, I would shoot hoops into the night and under starlight. In the winter, my brother and I would shovel snow off the court and play until our hands went numb.

The municipal workers did not take care of the public parks, at least not the one on my end of town. One day the pole that held the backboard snapped. Instead of waiting on the town to fix the basket, my grandfather took matters into his own hands. A welder by trade, he went to the park and welded the pole back to the backboard so the kids in the neighborhood could play.

Our season never got shut down over a glorified flu virus with an infection fatality rate lower than annual influenza for those under 70 years of age, and no students had to take a potentially lethal gene-therapy “vaccine” before they could play.

Oh, the good old days. Years before Big Pharma and the government wanted to poison kids with mRNA.

I started coaching at my alma mater during the 2021-2022 varsity basketball season, since my buddy, who I played with in high school, became the head coach and asked me to join his staff as an assistant.

In early December our team played its first game in a tip-off tournament. Right after the national anthem, and before announcing the starting lineups, the announcer read a message over the speaker that I have never heard before in all my time around high school athletics.

I walked over to the gentleman who kept the book for our team, a man who has been around the school’s basketball program without pause for the past twenty years, and asked him if he had ever heard an announcement about sudden cardiac death prior to any games before this season.

He said he had not.

Preceding Covid-19 and the “vaccine” rollout, sudden cardiac death did occur, albeit rarely, in high school athletes with underlying, undiagnosed heart conditions. These exceptionally uncommon occurrences made local news headlines, but parents still did not worry if their kids would drop dead on the court or gridiron during competition. These episodes were far too anomalous to register on anyone’s radar.

But we have entered an era of frequent cardiovascular issues, and a significant increase in sudden deaths throughout the country and the world, which Professor of Media, Culture, and Communication at New York University, Mark Crispin Miller, diligently tracks on his Substack. The increase in sudden deaths has coincided with a dramatic surge in myocarditis/pericarditis reports to the Vaccine Adverse Event Reporting System (VAERS) after vaccination with mRNA.

Athletes, in particular, have collapsed during competition at unheard of rates since the mRNA gene-therapy became available. In 2021, pro soccer players (footballers) died of cardiovascular problems at 278% times the normal annual rate; just this past week, two European cyclists died suddenly, and another suffered a heart attack at the finish line of a race.

Now, electrocardiograms might become a normal part of the physical examination process for high school athletes. The Orange County Public School System in Florida, for example, mandated them for student-athletes this past year.

This mandate relates directly to the known hazards of the toxic biological mRNA injections, which many high schoolers throughout America have received. However, in a moment of sanity in the midst of the Pharma fascist crusade to inject everyone in America with a dangerous gene-therapy, the Florida Department of Health recently became the only state in the U.S. to advise against vaccinating healthy children.

The City of New York, though, continues to coerce the young into taking mRNA with their mandate for student-athletes. Interestingly, there is no Covid-19 vaccine mandate to attend school in NYC, or to take gym class, for that matter – but mandates remain for after school sports and extracurriculars, as well as for prom.

What a strange science New York City students must follow.

Nevertheless, cardiovascular complications are just one of the many risks of taking these shots (others include neurological issues, auto-immune issues, etc.) that unvaccinated NYC students must take on just so they can have a completely normal school experience. This is also in light of a recent study which infers that over 300,000 Americans have been killed by the Covid-19 vaccines to date.

In November of 2021 a study out of Hong Kong showed that as high as 1 in 2,680 male adolescents who received the gene-jab developed myocarditis/pericarditis. One must take into consideration the fact that up to 20% of myocarditis cases result in death within 6.5 years.

Currently, 52% of New York City public school students have received the Covid-19 inoculation, according to an article from February 25, 2022 in Chalkbeat, an education news website. This means that nearly half of NYC students remain barred from playing sports and engaging in other extracurricular activities, such as band, chorus, and theater. Unvaccinated students in NYC face daily medical discrimination.

Professional athletes, though, have resumed play in the Rotten Apple since Mayor Eric Adams lifted restrictions for unvaccinated sports figures and other entertainers who generate revenue for the city. This has allowed NBA star Kyrie Irving to ball in Brooklyn for the first time this season.

In a post game conference after his recent home debut, Irving explained what this season has meant for him:

Freedom, I don’t think that’s a word that gets defined enough in our society, about the freedom to make choices with your life without someone telling you what the fuck to do and whether that carries over to nuances of our society that politicians control, the government controls….

Kyrie held out from taking the injection and stuck to his principles as he stood up for his freedom to choose what goes inside his body – a freedom that the New York City Department of Education denies student-athletes.

Double standards in NYC must end.

The New York City Department of Education must rescind Covid-19 vaccine mandates for students to participate in any kind of school function, because, aside from the deaths and adverse events, mandates have reached peak absurdity in light of the the shot’s negative efficacy: the vaccinated catch and spread Covid-19 at higher rates than the unvaccinated.

Finally, it’s time for The City That Never Sleeps to genuinely wakeup and stop the medical discrimination, to stop injecting kids with a toxic product, and to let all student-athletes compete in sports again.

It’ll be good for their health.