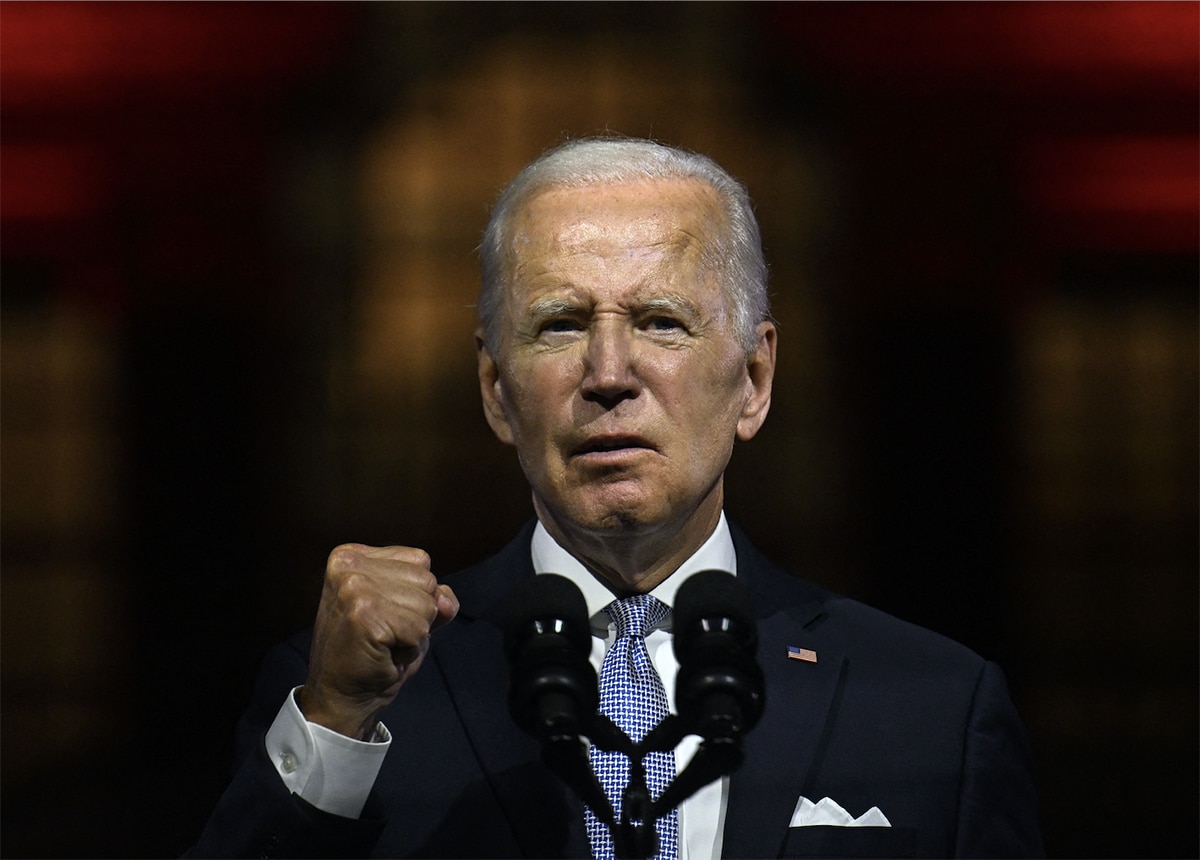 He looked shaky as he hobbled onstage Thursday night, but at the podium the drugs kicked in and Joe Biden delivered a commanding speech, by his standards. He handled an early bout of hoarseness like a pro, matched affect to content most of the way, and fumbled few words and none seriously.

But something was off from the start. Biden’s handlers had the otherwise inspiring setting of Philadelphia’s Independence Hall bathed in so much blood-red light, he looked like an opening act for Queensrÿche or Rammstein. Trying to create a setting for judgment and warning, they overshot the staging and made the white-haired ex-Senator look like a vampire sat up from a crypt.

The only political speech I can remember that rivaled Biden’s address for darkness is Donald Trump’s own much-pilloried tirade against “lawlessness” at the 2016 Republican convention (I was there and called it “relentlessly negative… pure horror movie… with constant references to murder and destruction”). In fact, replace “illegal immigrants… roaming free to threaten peaceful citizens” with “MAGA Republicans… [threatening] the very foundations of our Republic,” and that speech of Trump’s reads eerily like the one Biden just gave, which Fox host Bret Baier agreed was “essentially a convention speech.” Both described a lost paradise that may be regained, if only we rid ourselves of a verminous infestation of lawbreakers.

On one level, it was standard ring-around-the-collar tactics. From Barry Goldwater in 1964 exhorting supporters against “marauders,” to Nixon four years later rallying “forgotten Americans” against the “merchants of crime and corruption,” to retired Barack Obama in 2020 warning of a nameless “them” who would “take away your power” and “your democracy,” this type of scare speech is a familiar political trope.

But Biden was going for something bigger, and the speech his primetime gambit most resembled was the great demented clarion call of our age, George W. Bush’s 2002 State of the Union address. That landmark effort, written by current Democratic Party consigliere and furious Twitter dimwit David Frum, outlined with literary élan the Bush administration’s grand plan for fucking up the response to 9/11. It would be the Sorcerer’s Apprentice approach to terror prevention: in every place we found a terrorist, we created two more, and still more to chase each of those, and so on, until the Middle East filled up with our soldiers, frantically bailing a flood of our own creation.

This happened because instead of focusing on al-Qaeda as a small, isolated cult best dealt with as an international policing problem, Bush announced an existential fight against all evil everywhere, in a snap boosting the enemy’s numbers from hundreds to millions. We weren’t just fighting bin Laden’s cave force, but the “thousands of dangerous killers” he said were “spread throughout the world like ticking time bombs,” members not just of al-Qaeda but “Hamas, Hezbollah, Islamic Jihad and Jaish-i-Mohammed.” To pursue them “wherever they are,” we’d also fight “nations” who “harbor terrorists,” as well as those who might harbor terrorists; Bush sought to eliminate the very concept of threat. He’d prevent “regimes that sponsor terror from threatening America,” beginning with Iran, North Korea, and Iraq, the “axis of evil.”

A key theme was preventive action. Bush wouldn’t wait for disaster, but would step in, Minority Report-style, to stop it before it began. He read off this pledge like a religious incantation, using a Dr. Seuss-like rhythm: “I will not wait on events while dangers gather. I will not stand by as peril draws closer.” (He did not like Green Eggs and Ham. He did not like them, Sam I Am!). He repeated over and over that Our Enemies were steeped in evil, people who “embrace tyranny and death as a cause and a creed,” while we stand for “freedom and the dignity of every life.” He demanded unity, noting that in this binary world, none may be neutral:

No nation owns these aspirations, and no nation is exempt from them. We have no intention of imposing our culture, but America will always stand firm for the non-negotiable demands of human dignity…

Biden’s speech was an exact domestic analog. Like Bush’s sweeping description of enemies wedded Satanically to tyranny and death, Biden’s MAGA Republicans “embrace anger,” “thrive on chaos,” and live “not in the light of truth but in the shadow of lies.” He repeated almost verbatim Bush’s theory of preventive action, saying it is too dangerous to allow “MAGA Republicans” to run for office. He said “they” are working “as I speak” in “state after state” to pack vote-counting bureaucracies with “partisans and cronies,” with the express purpose of “thwarting the will of the people.” He will not watch MAGAs win a house, he will not watch them with a mouse:

This is a word-for-word lift from Bush, who said “I will not stand by as peril draws closer and closer,” and backed up his talk with pre-emptive military action. Will Biden also act? Assume for argument that he’s right, that Trump allies are running for office with the purpose of stealing elections. Still, what does “I will not stand by and watch it” mean? Biden hinted that courses of action are available, but was unnervingly vague about what those are. “We are not powerless in the face of these threats,” he said. “We are not bystanders… it’s within our power… to stop the assault on… democracy.”

If he’s talking about voting, that’s one thing, but Biden’s extravagant use of the language of threat — he invoked the word nine times, besting even the seven mentions in the Bush/Frum speech — suggested other possibilities.

Modern Republicans bear a lot of responsibility for the fact, and I’d hope at least a few of the party’s officials are smarting from the irony now, but in the War on Terror age, the words presidents choose to describe antagonists unfortunately mean a lot. 21st century presidents can spy, kill, and imprison just by invoking that magic word, “threat,” and this is obvious and important subtext to Biden’s remarks.

Just over 20 years ago, when George W. Bush re-christened American citizen Jose Padilla an “enemy combatant” who posed a “serious and continuing threat” to America, the semantic change gave him power to detain the man three years without charge. Bush lawyers later claimed authority to use “enhanced interrogation” on “members of the enemy.” One could be put on a Watch List, with consequences ranging from restricted travel to cessation of government benefits to being denied a bank account, if judged to have “known or potential links to terrorism.” The Obama administration followed by sanctifying “targeted killing” even for an American deemed a “continued and imminent threat to U.S. persons or interests.”

This is why it matters when Biden describes “MAGA Republicans” as a “threat… to the very soul of this country,” or as “extremism that threatens the very foundations of our Republic,” representing “dangers around us we cannot allow to prevail.” It’s hard to see how these terms are substantively different from War on Terror constructions like the “continued and imminent threat to U.S. interests” or a “serious and continuing threat to the American people.” Biden sounded like a man preparing followers for an enforcement response to Trumpism itself, and even if that wasn’t what he was doing, it’s clear many Trump supporters heard things that way.

Biden went out of his way to quote federal judge Michael Luttig in calling the MAGA enemy a “clear and present danger.” The loaded term traces to a 1919 Supreme Court case in which Oliver Wendell Holmes created a test for judging if speech and/or other political activities may be suppressed. “The question,” Holmes wrote, “is whether the words… create a clear and present danger that they will bring about the substantive evils that Congress has a right to prevent.” This “balancing test” was invoked to justify restrictions ranging from a ban on passing out antiwar leaflets to bars of membership in communist organizations. The “substantive evil” in such cases often involved a judgment that groups or individuals posed an active threat to overthrow the state — not so different from arguing that a political movement threatens “democracy itself.”

In the context of what increasingly feels like a fifties-style PR campaign to describe “MAGA Republicans” as dangerous subversives, “clear and present danger” sounded particularly ominous.

Biden made headlines last week when he denounced “extreme MAGA philosophy” as “like semi-fascism.” Later, DNC adviser Kurt Bardella went on MSNBC and said, “The MAGA Republicans are a domestic terrorist cell operating in America.” Bardella retweeted his comments in case anyone missed his point: 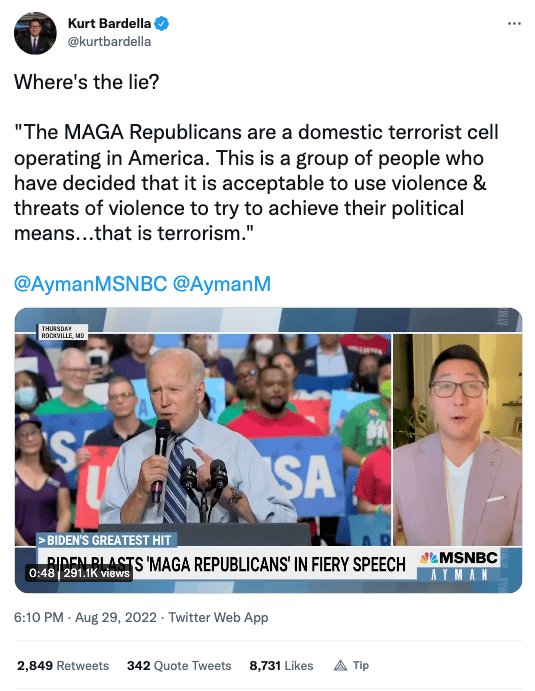 Atlantic contributor Peter Wehner went on Morning Joe and previewed a line that would appear in Biden’s speech, saying Republicans are a “dagger pointed at the throat of American democracy,” while New York Times writer Charles Blow said “the Republican Party itself is now a threat to our democracy.” The concept of MAGA Republicans as not merely disreputable, deplorable racists but an imminent terror threat is suddenly mainstream: 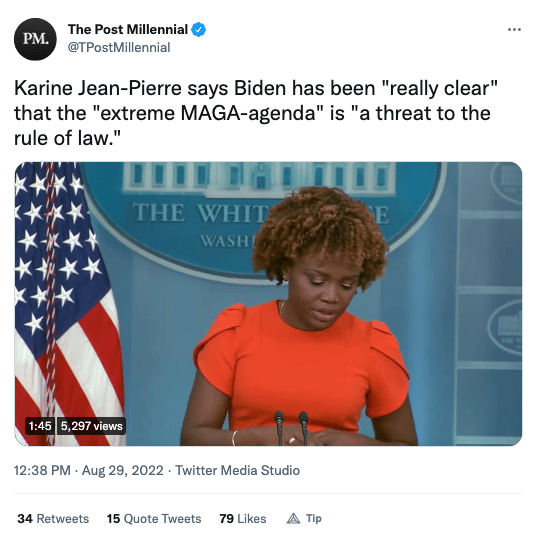 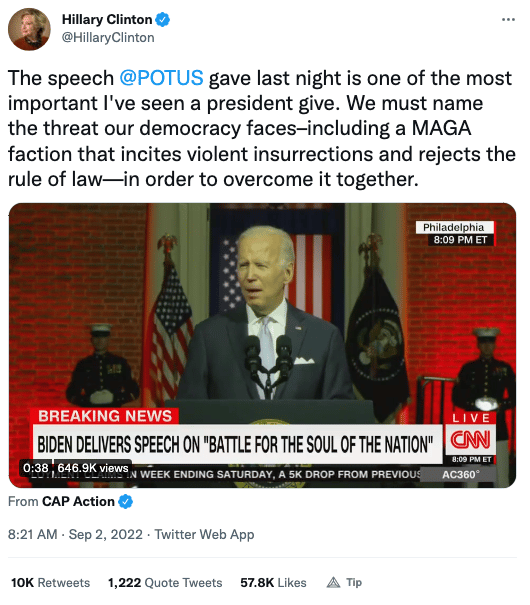 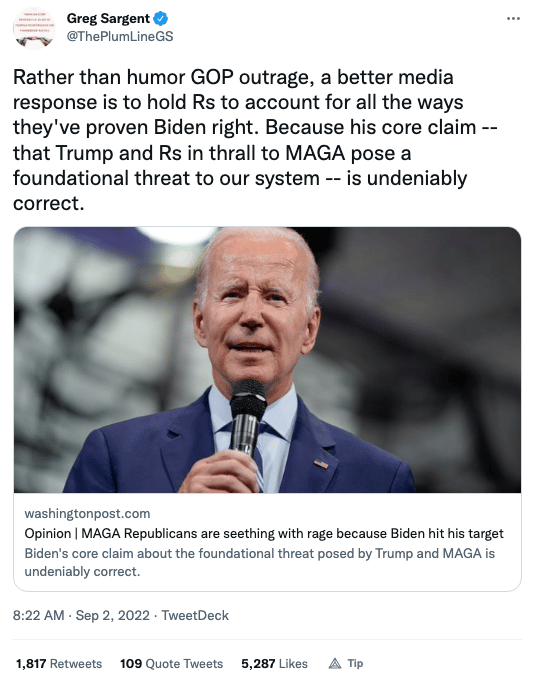 Seventy-four million people voted for Trump in 2020. It’s beyond delusional to think they are all violent extremists. A smart politician would recognize the overwhelming majority are just people who pay taxes, work crap jobs, raise kids, obey the law, and give at most a tiny share of attention to politics. The University of Virginia did a study arguing that as many as 8 million previously voted for Obama, so there’s that. I’d bet more than half would pick a screening of Thor: Love and Thunder over a Trump speech. The only sure way to radicalize the lot is to call them one big terror cell, or have the president go on TV to describe them as an existential threat to national security.

Having done that, Biden now has a bigger problem than ever. What a mess, but how perfectly in character for our leaders! Metaphorically we’re always blowing up villages and pyramids to chase a terror suspect into the desert. Now we’re factory-producing enemies at home, too, and it doesn’t look like anyone up there knows how to stop.