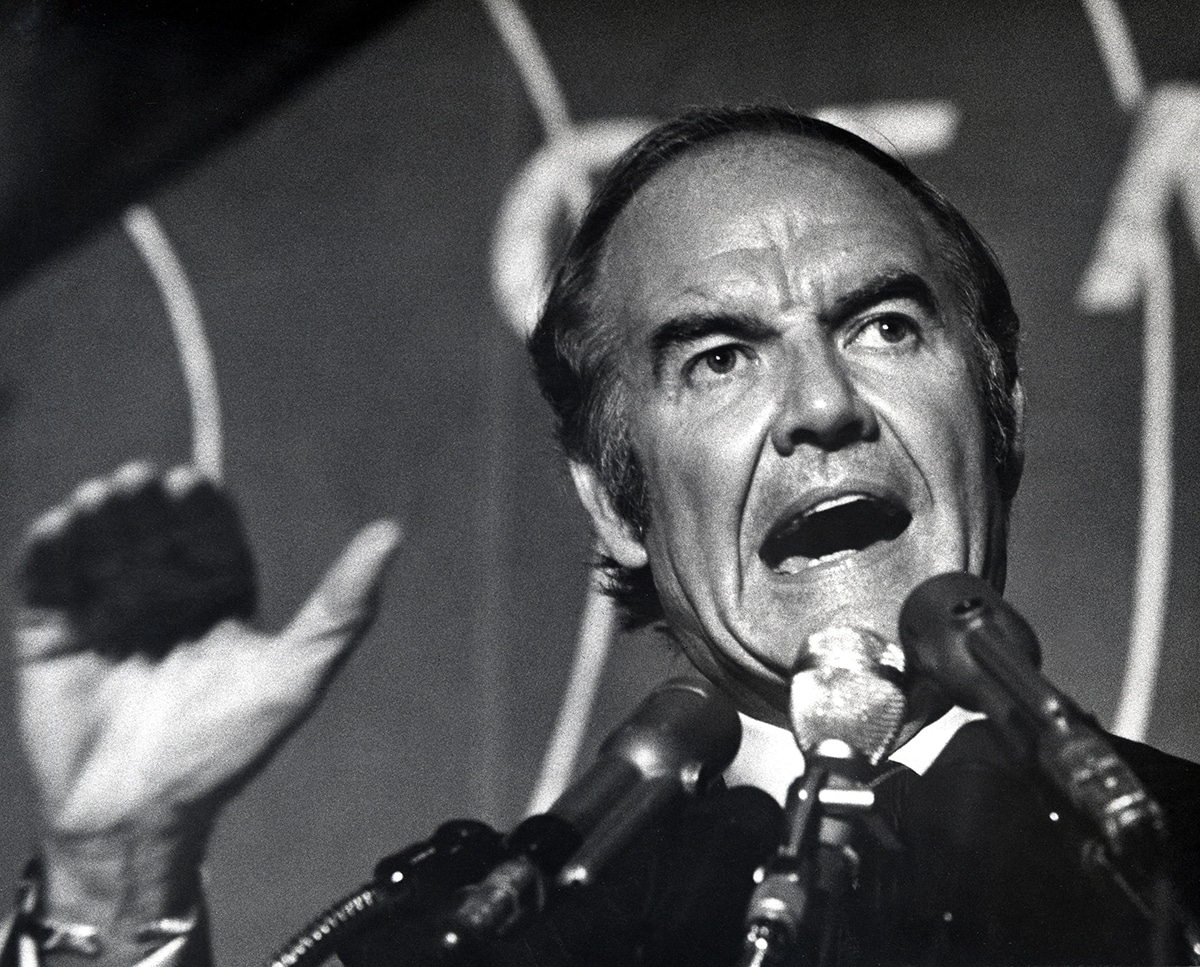 This morning George McGovern died. He was 90 years old.

Forty years ago, at the 1972 Democratic National Convention, George McGovern delivered his acceptance speech as the Democratic presidential nominee. At the convention his speech was delayed for several hours as the party fought over the platform. He eventually accepted the nomination at around 2 a.m. Most of the nation never saw the speech.

Mr. McGovern’s acceptance speech included an unequivocal promise to immediately end the war in Vietnam and a proposal for a guaranteed national income along with guaranteed national health care. His defeat in 1972 ushered in the “if you can’t beat ’em join ’em” Republicanization of the Democrat Party by corporate hucksters like Jimmy Carter and Bill Clinton. The Democrats and the country changed forever.

Here are some excerpts from George McGovern’s acceptance speech:

Those who lingered on the brink of despair only a short time ago have been brought into this campaign, heart, hand, head and soul, and I have been the beneficiary of the most remarkable political organization in the history of this country.

Let the opposition collect their $10 million in secret money from the privileged few and let us find one million ordinary Americans who will contribute $25 each to this campaign, a Million Member Club with members who will not expect special favors for themselves but a better land for us all.

In the literature and music of our children we are told, to everything there is a season and a time to every purpose under heaven. And for America, the time has come at last.

This is the time for truth, not falsehood. In a Democratic nation, no one likes to say that his inspiration came from secret arrangements by closed doors, but in the sense that is how my candidacy began. I am here as your candidate tonight in large part because during four administrations of both parties, a terrible war has been chartered behind closed doors.

I want those doors opened and I want that war closed. And I make these pledges above all others: the doors of government will be opened, and that war will be closed.

Truth is a habit of integrity, not a strategy of politics, and if we nurture the habit of truth in this campaign, we will continue to be truthful once we are in the White House.

“So let us give our — let us give your country the chance to elect a Government that will seek and speak the truth, for this is the time for the truth in the life of this country.

And this is also a time, not for death, but for life. In 1968 many Americans thought they were voting to bring our sons home from Vietnam in peace, and since then 20,000 of our sons have come home in coffins.

I have no secret plan for peace. I have a public plan. And as one whose heart has ached for the past ten years over the agony of Vietnam, I will halt a senseless bombing of Indochina on Inaugural Day.

And then let us resolve that never again will we send the precious young blood of this country to die trying to prop up a corrupt military dictatorship abroad.

This is also the time to turn away from excessive preoccupation overseas to the rebuilding of our own nation. America must be restored to a proper role in the world. But we can do that only through the recovery of confidence in ourselves.

Now, to anyone in this hall or beyond who doubts the ability of Democrats to join together in common cause, I say never underestimate the power of Richard Nixon to bring harmony to Democratic ranks. He is the unwitting unifier and the fundamental issue of this national campaign and all of us are going to help him redeem a pledge made ten years ago — that next year you won’t have Richard Nixon to kick around anymore.

We have had our fury and our frustrations in these past months and at this Convention, but frankly, I welcome the contrast with the smug and dull and empty event which will doubtless take place here in Miami next month.

We chose this struggle, we reformed our Party, and we let the people in. So we stand today not as a collection of backroom strategies, not as a tool of ITT or any other special interest. So let our opponents stand on the status quo while we seek to refresh the American spirit.

I believe that the greatest contribution America can now make to our fellow mortals is to heal our own great but very deeply troubled land. We must respond — we must respond to that ancient command: “Physician, heal thyself.”

Now, it is necessary in an age of nuclear power and hostile forces that we’ll be militarily strong. America must never become a second-rate nation. As one who has tasted the bitter fruits of our weakness before Pearl Harbor in 1941, I give you my pledge that if I become the President of the United States, America will keep its defenses alert and fully sufficient to meet any danger.

We will do that not only for ourselves, but for those who deserve and need the shield of our strength — our old allies in Europe and elsewhere, including the people of Israel who will always have our help to hold their Promised Land.

Yet I believe that every man and woman in this Convention Hall knows that for 30 years we have been so absorbed with fear and danger from abroad that we have permitted our own house to fall into disarray.

National security includes schools for our children as well as silos for our missiles.

It includes the health of our families as much as the size of our bombs, the safety of our streets, and the condition of our cities, and not just the engines of war.

If we some day choke on the pollution of our own air, there will be little consolation in leaving behind a dying continent ringed with steel.

So while protecting ourselves abroad, let us form a more perfect union here at home. And this is the time for that task.

We must also make this a time of justice and jobs for all our people. For more than three and half years we have tolerated stagnation and a rising level of joblessness, with more than five million of our best workers unemployed at this very moment. Surely, this is the most false and wasteful economics of all.

Our deep need is not for idleness but for new housing and hospitals, for facilities to combat pollution and take us home from work, for better products able to compete on vigorous world markets.

The highest single domestic priority of the next administration will be to ensure that every American able to work has a job to do.

That job guarantee will and must depend on a reinvigorated private economy, freed at last from the uncertainties and burdens of war, but it is our firm commitment that whatever employment the private sector does not provide, the Federal government will either stimulate or provide itself.

Whatever it takes, this country is going back to work. America cannot exist with most of our people working and paying taxes to support too many others mired in a demeaning and hopeless welfare mess.

Therefore, we intend to begin by putting millions back to work and after that is done, we will assure to those unable to work an income fully adequate to a decent life.

Now beyond this, a program to put America back to work demands that work be properly rewarded. That means the end of a system of economic controls in which labor is depressed, but prices and corporate profit run sky-high.

It means a system of national health insurance so that a worker can afford decent health care for himself and his family.

And above all, above all, honest work must be rewarded by a fair and just tax system.

The tax system today does not reward hard work: it’s penalizes it. Inherited or invested wealth frequently multiplies itself while paying no taxes at all. But wages on the assembly line or in farming the land, these hard-earned dollars are taxed to the very last penny.

There is a depletion allowance for oil wells, but no depletion for the farmer who feeds us, or the worker who serves as all.

The administration tells us that we should not discuss tax reform in the election year. They would prefer to keep all discussion of the tax laws in closed rooms where the administration, its powerful friends, and their paid lobbyists, can turn every effort at reform into a new loophole for the rich and powerful.

But an election year is the people’s year to speak, and this year, the people are going to ensure that the tax system is changed so that work is rewarded and so that those who derive the highest benefits will pay their fair share rather than slipping through the loopholes at the expense of the rest of us.

So let us stand for justice and jobs and against special privilege.

And this is the time to stand for those things that are close to the American spirit. We are not content with things as they are. We reject the view of those who say, “America — love it or leave it. ” We reply, “Let us change it so we may love it the more.”

And this is the time. It is the time for this land to become again a witness to the world for what is just and noble in human affairs. It is time to live more with faith and less with fear, with an abiding confidence that can sweep away the strongest barriers between us and teach us that we are truly brothers and sisters.

From secrecy and deception in high places; come home, America

From military spending so wasteful that it weakens our nation; come home, America.

From the entrenchment of special privileges in tax favoritism; from the waste of idle lands to the joy of useful labor; from the prejudice based on race and sex; from the loneliness of the aging poor and the despair of the neglected sick — come home, America.

Come home to the belief that we can seek a newer world, and let us be joyful in that homecoming, for this “is your land, this land is my land — from California to New York island, from the redwood forest to the gulf stream waters — this land was made for you and me.”