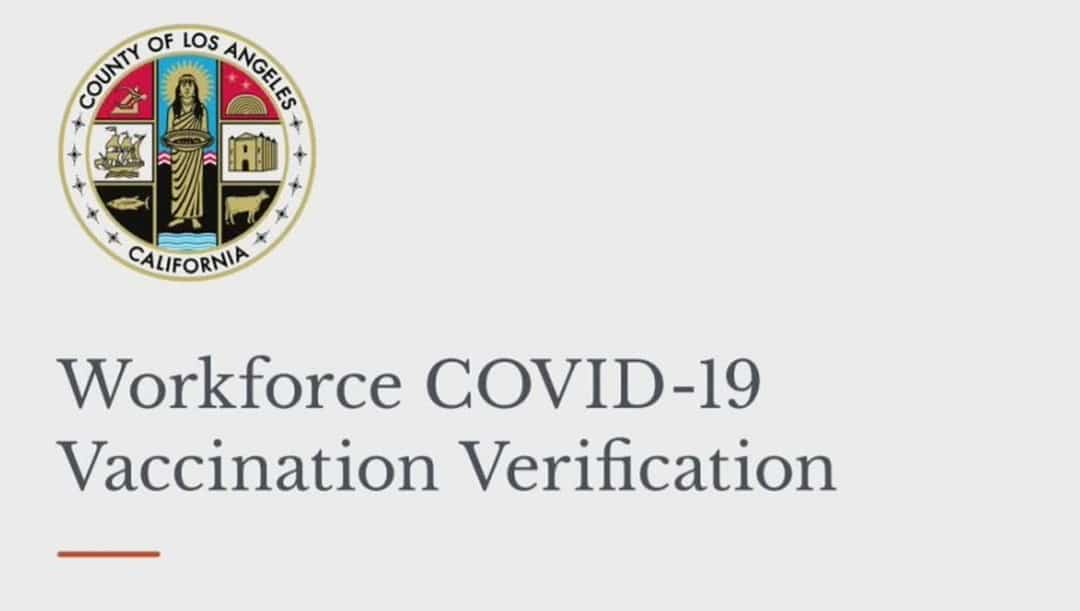 Responders and public employees joined together in a lawsuit against the County of Los Angeles, protesting the unfair vaccine mandate against them, while judges and elected officials are exempt.

These 4,000+ Individuals -Across 55 Departments of First Responders and Public Workers- Oppose the Covid Shot Mandate by the County of Los Angeles, which require all 110,000 County Employees, except Judges and Elected Officials, to take the Shot.

More County Employees are joining every day. Workers stated: “We won’t comply. We are going to take this as far as we need to go.” “You can’t run a city without the people who run the city.”

On Friday, October 1st, the complaint was filed in the Superior Court of the State of California against Defendant, the County of Los Angeles. • Five publicly named Plaintiffs represent the 4,000+ anonymous individuals opposing the mandate upon approximately 110,000 County Employees. • PERK, the non-profit named in the complaint, is advocating for these individuals, and is represented by John Howard JW Howard/ Attorneys, Ltd. and George Wentz of Davillier Law Group LLC.

Advocating for medical freedom, bodily autonomy, children’s rights, parental rights, civil rights and more, PERK, short for Protection of the Educational Rights of Kids, is deeply concerned about the negative impact the mandate will have on children and families across the county.

PERK believes if the First Responders, Public Workers and Healthcare workers were to lose their jobs if they didn’t comply, it would have severe consequences! Thousands of essential workers would be eliminated from the workplace, depleting and potentially decimating essential services which effectively keep our cities and communities functioning! The mandate would devastate the fundamental services, protection, and societal infrastructure necessary for children and families at home, at school, indoors and outdoors, virtually all private and public spaces!

The mandate jeopardizes our children’s basic health and well-being, including safety from fires, predators, crime, abuse and lack of emergency medical treatment!! To protect our children, families and community-at-large from these potentially devastating consequences, PERK has chosen to engage in this lawsuit.

Thousands committed to the lawsuit continue to reiterate, “We won’t comply. We are going to take this as far as we need to go.” Others state, “You can’t run a city without the people who run the city.”

The complaint states, “On August 10, 2021, the Board of Supervisors ratified Ms. Solis’ order, making it official County policy. The Board held little debate about the unprecedented mandate, which affects 110,000 people. It did not consider the mounting evidence that the Covid-19 shots do not prevent infection or reduce the virus’ spread. And the supervisors did not consider whether they could make accommodations for individuals who do not want to get the shots. They did not gather any evidence about the effectiveness, necessity or lawfulness of the shots.” “Furthermore, in issuing and ratifying the Covid-19 vaccine mandate, the Board failed to consider that County employees have a property interest in their employment. Thus, under Skelly v. State Personnel Board, 15 Cal.3d 194 (1975), they have a right to notice of their termination and an opportunity to be heard before a reasonably impartial and uninvolved hearing officer. They also have the right to conduct discovery before the hearing and must be paid during that time.

After being ignored continuously by elected officials, thousands have reached out to PERK for help. They believe the mandates placed upon them as first responders and public workers violates bodily autonomy, the Nuremberg code, Federal and State discrimination laws, privacy rights, and the mandates completely disregard any natural immunity. PERK is also certain the mandates will directly impact children negatively. When jobs are threatened, stress, instability, and food insecurities increase. Named PlaintiffsNamed plaintiffs represent themselves as individuals.

“Ironically, although the County framed its vaccine mandate as “necessary,” the policy exempts many of the most influential people in the County from it. For example, on information and belief, the policy does not apply to judges or elected officials, including the Supervisors themselves. These officials show no signs of embarrassment for having exempted themselves from mandates they presume to impose on others.”

Directly from the complaint: “In fact, there is mounting evidence that the experimental Covid-19 medical treatments created by Pfizer, Moderna and Johnson & Johnson do not prevent the virus from spreading. Thus, the vaccine mandate is both unnecessary and ineffective in protecting the public.” To discriminate against any First Responder, Public Employee, or persons who has not participated in receiving a Covid vaccine is unlawful and egregious. This mandate will divide the residents, business owners, city workers, first responders, and visitors of any city and cause irreparable harm to the economy and vitality of Los Angeles County. “Like all Californians, public employees have a right to bodily integrity and a right to refuse medical treatment, both of which the County’s vaccine mandate violates.

They also have a right to informational privacy. The County mandate violates that right by forcing public employees to disclose their personal medical information to their employer in order to keep their jobs.” Many of these public employees and first responders are already experiencing segregation, harassment, discrimination, coercion, based on their vaccination status. They are coming from across the state and stand as a unified body to claim that as individuals they have the right to decide what goes into their bodies. They include vaccinated and unvaccinated, diversity in all religious backgrounds, and political backgrounds.

It has long been observed that governments may not repress and deny fundamental rights and freedoms of people. There is an international covenant on Civil and Political Rights called the Siracusa Principle. California has codified in law your rights and protection under California Health and Safety Codes, against medical mandates, experimentations, experiments, including failure to give fully informed consent on risks, unknowns, and long-term health impact, including possibly mandating or forcing products.

FOR MORE INFORMATION ABOUT THE FIRST RESPONDER & PUBLIC EMPLOYEES LAWSUIT

I am also being discriminated against. How do I join this lawsuit?