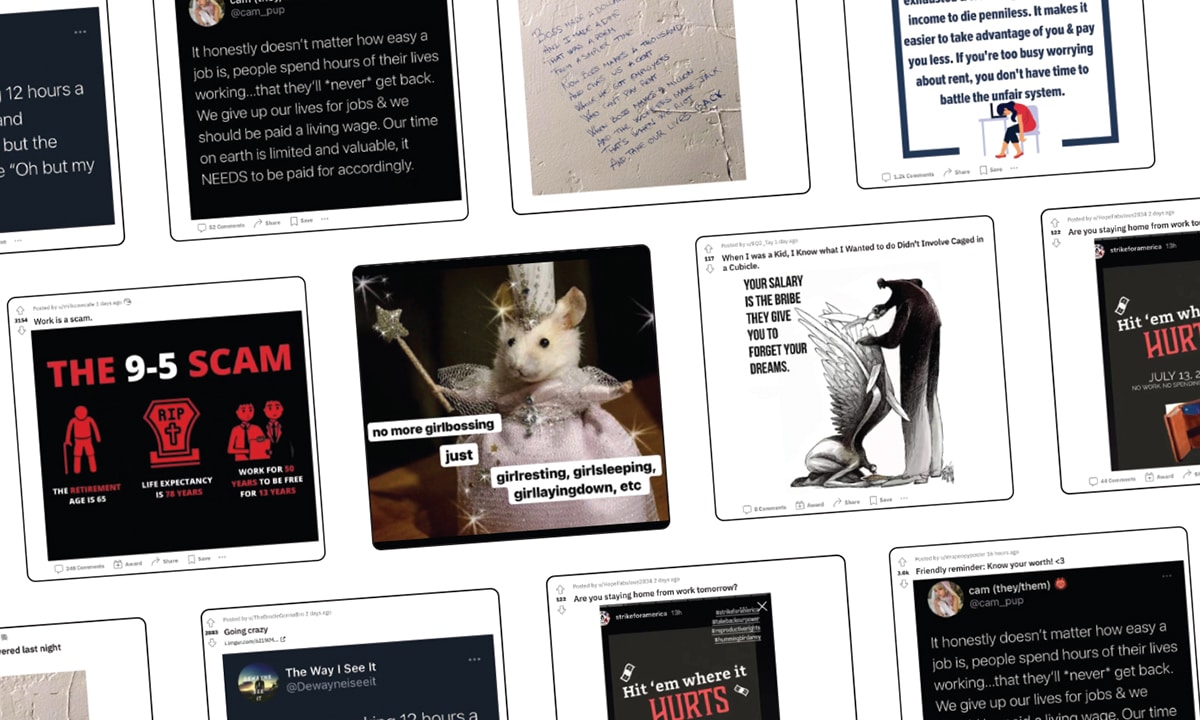 The Future of Work Is No Work

What if we abolished the institution of work?

If we were not required to work to pay for basic rights, such as food, shelter, and water, could we embrace radical solutions to change the current state of our society?

As the post-pandemic struggle about work and working conditions rages on, workers are quitting jobs that make them miserable, while unions seek recognition and avenues for negotiations, all within our current capitalistic system that declares each individual’s worth to be inherently tied to their productivity. But what if society was not organized around wage labor, but something else? And what would that something else be?

Millions of workers left jobs in 2021 at such a scale it’s been deemed the “Great Resignation.” Recent attempts to understand their dissatisfaction have explored what the “future of work” looks like and how work overall could become more bearable. How about a four-day work week? Or higher pay? Better working conditions? Flexible hours? But 32-hour weeks (or whatever good policy is on offer) are adaptations to a dehumanizing system—they don’t address that system as a whole, nor do they get to the core of the workers’ discontent with the inhumane machinations of capitalism.

Online, the rejection of the idea of work itself is a growing trend across social media platforms. On TikTok, confessional-style videos about how the poster doesn’t like to work, no matter what job, often go viral. One TikToker’s message—“Fuck this, I don’t want to work for the rest of my life :(”—received thousands of likes and comments in agreement. On Twitter, where the constant barrage of negative news is constantly dissected and commented on, posters point out how capitalism keeps marching on despite the unconscionable tragedies we’ve all had to digest in the past two and a half years. The pandemic, the Ukraine war, school shootings where children are massacred, continued police killings of Black people—none of these is enough to bring our exploitative system to a halt; workers are supposed to muddle through and keep the world turning with our labor. On Reddit, the “antiwork” community (the r/antiwork subreddit) has 2 million subscribers who can easily access an online library about the abolition of work and exchange experiences with each other about the jobs they don’t want to do. The motto of this subreddit, whose members call themselves “idlers,” is “Unemployment for all, not just the rich!”

On Reddit, the ‘anti-work’ community has 2 million subscribers who can easily access an online library about the abolition of work and exchange experiences with each other about the jobs they don’t want to do.

Despite the online hype, the idea of refusing the tyranny of labor rather than reforming it isn’t new. In 1985, post-leftist anarchist Bob Black wrote and published the essay “The Abolition of Work,” where he argues that work “is the source of nearly all the misery in the world. … In order to stop suffering, we have to stop working.”

For Black, working to earn a living is at the heart of capitalism’s coercive forces, and he asserts that society should be organized around play instead of wage labor. “I think that what I wrote is still true and only slightly exaggerated,” Black says. “As I define the word, ‘work’ is forced labor—compulsory production. It is inherently coercive, like the state.”

Black says having to pay for housing, food, water, health care, and whatever else is needed for survival is what keeps workers under the control of wage labor, regardless of what ideology is elected into government. “The most important function of work—as I have always maintained—is social control,” Black explains. And yet, as Black writes in his essay as well as in his book, also titled The Abolition of Work, a disproportionate amount of what constitutes “work” has little connection to human survival. Compiling work reports, filing meaningless corporate documentation, and inventing cryptocurrency are just a few examples of “work” that do not aid the practical survival of humans. Abolishing work would free us to do what we really love and reorient human efforts toward care and the simple act of living.

“Society would be simpler [and] radically decentralized, yet people would be more diverse, more individualized, and so their social relations would be richer, more complex,” Black says. “Life would be safer, although maybe less orderly. But where order is necessary, it would be the order of custom, not the rule of law. There would be opportunities, beginning in childhood, for people to try out many different things and discover what things they can do that they like best. Maybe there will be some people who like doing the same thing all the time—in other words, doing a ‘job.’ These unfortunates, too, should be free to do what they want to do. This is a society that has no center.”

The Anti-Work Response to the Girlboss

One example often used in support of anti-work arguments online is the alleged death of the “girlboss.” The girlboss can be exemplified by Kim Kardashian, who models aspirational femininity and independent entrepreneurship that supposedly liberates women from gender oppression, even as she ends up reinforcing and repeating the same abuses she supposedly sought to eliminate. A combination of pandemic burnout, growing social awareness, and the emptiness of women “having it all” in a broken economy has revealed the impact of the girlboss to be less than revolutionary. As Amanda Mull wrote in The Atlantic: “The push to move beyond the girlboss is an acknowledgment that a slight expansion of college-educated women’s access to venture capital or mentoring opportunities was never a meaningful change to begin with, or an avenue via which meaningful change might be achieved. Being belittled, harassed, or denied fair pay by a woman doesn’t make the experience instructive instead of traumatic.”

The anti-girlboss sentiment is often articulated through memes that challenge the message that women should be doing it all. Instead, these memes argue for “girlresting, girlsleeping, girllayingdown, etc.” For Angie Barbosa, an anarcho-feminist travesti (a transfemme, nonbinary identity specific to Latin America) scholar who studies feminist, queer, and anarchist literature and activism, these memes are a countercurrent to the violence of feminized “hustle” culture.

“Not only do women and femmes have to deal with violence, exploitation, overworking, and constant impairments against our autonomy, now we’re also supposed to struggle within a value system that asks us to be healthy, happy, confident, self-sufficient, self-caring, boundary-aware, independent consumers,” Barbosa says. “We are working endlessly, tirelessly to produce a performance of successful femininity that denies the soul-wrecking gendered reality of violence. We are overworked, exhausted, angry, frustrated, violenced, deprived of many of our basic rights, and somehow still expected to feel like a boss.”

Adding to the burden of women and femmes is the unpaid labor of domestic work, which is still largely invisible and unaddressed by policies that attempt to make waged work more comfortable. Even with a flexible work schedule, domestic work is still low-paying and distributed along gendered lines.

“The reality of care and work can be terribly exhausting for femmes, but the good news is that the more people, groups, and communities are caring for each other in balanced, consent- and autonomy-based structures, the less everyone has to work, and it just becomes easier to live,” Barbosa says.

Small feminist structures of care and radical solidarity are the counterpoint to the solitary and herculean work of the girlboss—and as such, the abolition of work must also reckon with the racialized and gendered distribution of domestic and care work. “I believe that whether this future of femme freedom includes work or not depends on our reading of what ‘work’ means,” Barbosa says.

Underlying the taboo around the abolition of work is the fear that the world won’t sustain itself if people are not coerced into performing tasks to ensure humanity’s survival. How would we eat if workers were not forced to grow food for themselves and to sell it to others for their own sustenance? How would we keep public spaces clean and usable without street sweepers and maintenance workers who need a paycheck to support themselves? How would we survive without the care work and domestic labor that the racialized working classes are compelled to provide below cost? Black believes that if the structure of work is abolished, people will be able to sustain themselves and take care of each other, but without coercion.

For practical thinkers, this reorganization sounds easier said than done. We have been manipulated into maintaining capitalism—and correlating this maintenance with our own survival—for so long that the idea of people working to help each other survive sounds improbable and impossible. What would we get in exchange for our selfless efforts to maintain each other’s existence? What would be the trade-off, if not money? Self-sustaining societies—such as the Zapatistas in Mexico, who have organized their own cooperative economy; developed autonomous justice, education, and health care systems; and created a bottom-up political decision-making process—are proof we can lasso the abolition of work to the possibilities of reality.

‘We need to transform everything,’ Black says. ‘In my utopia there would be little coercion, and no institutionalized coercion such as government and work.’

“We need to transform everything,” Black says. “In my utopia there would be little coercion, and no institutionalized coercion such as government and work. Some activities, including some of what used to be ‘work,’ are likely to be done in relatively permanent organizations—and there is some risk in that. Work like that, when it is not individual craft work, can be organized by worker self-management.”

For Barbosa, the abolition of work and redistribution of domestic work is an invitation to rethink what we value in our lives. “If the meaning of our lives was no longer to work, it could be a genuine and deep connection to each other, our bodies, and our environment,” she says. “It’s interesting that removing work from the equation makes a lot of our current definitions of success and happiness quite meaningless. It could be very powerful to imagine what happiness could be if it’s not just survival, success, capital. If we didn’t have to fight for the basics, I really have no idea what we should or could do instead, but I would love to find out.”